Home Features Can the Church Disengage From Politics? 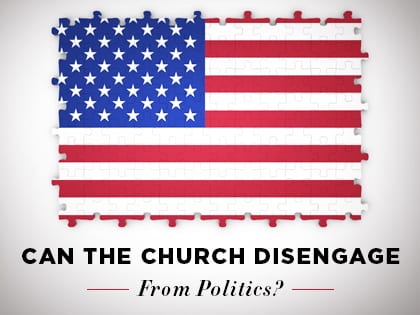 Russell Moore: “We cannot simply assume that ‘changed people’ will ‘change the world.'”

These Christians have a point. Unlike the prophets toward both Israel and the surrounding nations, Jesus and the apostles seem relatively unperturbed by the moral climate of the Roman Empire. The New Testament church wasn’t mobilizing for political change on matters like slavery or gladiator-fighting or empire-building wars.

But this is to be expected. The New Testament was written almost exclusively to a group of believers who lacked any social or political power, and who thus bore no accountability for decisions made in the cultural and political spheres. But even though Rome was no democracy and the apostles had no say in what the Emperor decided, we can see the New Testament pointing us to callings informed by the gospel, even in what we might consider “politics.”

John the Baptist called the crowds to repentance. A drunk coming to be baptized would have been told to repent of intoxication. An adulterer would have been told to walk forward in fidelity, to “go and sin no more” (Jn. 8). Some who held political office responded to John’s preaching, notably tax collectors and soldiers, both officers of Caesar’s government. They asked the prophet, “Teacher what shall we do?” John’s response was not to mark out their “personal” obedience from their “political” obedience. He said to the tax collectors: “Collect no more than you are authorized to do” (Lk. 4:13). He said to the soldiers: “Do not extort money from anyone by threats or by false accusation, and be content with your wages” (Lk. 4:14). These were matters both of personal repentance and of public justice.

American Christians often don’t realize that we are more like the tax collectors and the soldiers, no matter our occupations, than we are like the occupied peoples of the Empire. Paul wrote to the church at Rome that the sword of Caesar is given by God, to be wielded with accountability to God based on the responsibilities and limits derived from God’s delegated authority.

In a democratic republic, the final authority for making decisions of statecraft (sword-wielding) rests with the people themselves. In the voting booth, we are delegating to others how to swing the sword of public justice on our behalf. A church that doesn’t form consciences for such a calling will only ensure that those consciences are shaped by something other than the gospel.

From Outreach Magazine  Back to Basics: Faith Church

Contrary to what some might think, the new birth itself is not the standalone remedy for the work for righteousness and justice. We cannot simply assume that “changed people” will “change the world.” Political structures and cultural mores are complex systems that live long past the lifespans of their creators, and often shape what seems plausible or possible to those who grow up in them.

Personal piety ought to alert us to questions of systemic or structural injustice, but we cannot pretend that the one automatically means the other. If the new birth conferred immediate wisdom and insight, we wouldn’t need the directives on how to live, given repeatedly in both Testaments. Even if a global awakening were to lead to the conversion of the whole world, we would still need to ask how we ought to work together, socially and politically, to steward culture and to settle disputes among us.

Any Christian witness that doesn’t start and finish with the gospel is unspeakably cruel and, in fact, devilish. The devil works in two ways: by deception, “You shall not surely die” (Gen. 3:4), and by accusation, “who accuses them day and night before our God” (Rev. 12:10).

The devil wishes to assure some people that there’s no need for repentance, and others that there’s no hope for mercy. Some people are deceived into thinking they are too good for the gospel while others are accused into thinking they are too bad for the gospel. No one is more pro-choice than the devil on the way into the abortion clinic, and no one is more pro-life than the devil on the way out of the abortion clinic. The gospel of Jesus Christ tears down both strategies.

The gospel clearly calls us to repentance and is hated by the outside world. And the gospel clearly calls us to mercy by faith in the blood of Christ, even when we can’t believe that we’d ever be received. In our day, that personal aspect of the gospel is probably most controversial when it comes to issues of sexual morality. Some would suggest that we do precisely what the universalists of old did on the question of God’s judgment of sin.

Instead of a blanket universalism, though, they counsel a targeted universalism, which leaves unperturbed one area of sin. But this not only is unfaithful to God; it is unloving to neighbor, leaving those in need of mercy terrorized by their own consciences. We empower darkness when we refuse to warn of judgment. The gospel brings our sin out into the open, but not in the way the devil does. The gospel does not expose sin in order to condemn but in order to reconcile.

Whether in a story from a Jericho ditch or in a letter from a Birmingham jail, we must be reminded that we serve a God of both justice and justification, and we must not pit the two against each other. Our mission is rooted in a gospel that tells us honestly of the bad news of our sin and the good news of God’s grace.

Our mission reconciles sinners to God, but also reconciles person to person, community to community, humanity to nature. We must speak truth to power, even as John the Baptist did to King Herod (and sometimes with the same results).

Let’s feed the power, house the homeless, shelter the widow, adopt the orphan, advocate for the unborn and steward the environment. But, as we do, let’s, most importantly, preach peace and justice, for individuals and for the whole world, found in the bloody cross and empty tomb of Jesus. As the culture finds Christianity stranger and stranger, we will find that the strangest thing we have to say is, “Jesus saves.”

Russell Moore is president of the Ethics & Religious Liberty Commission of the Southern Baptist Convention, a widely-sought cultural commentator and author of several books. This article is adapted from Moore’s book Onward: Engaging the Culture Without Losing the Gospel (B&H Books, 2015)—a 2015 Outreach Resource of the Year. This adapted article was originally published on RussellMoore.com.