Home Features Jesus Was a Refugee 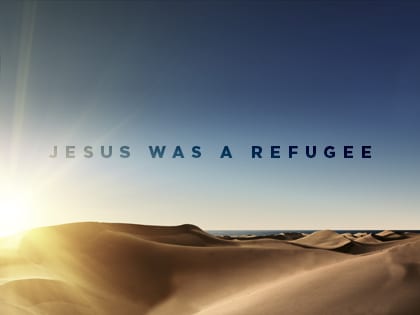 “The men, women and children who are fleeing, trying to escape with their lives, have a High Priest who knows what it’s like.”

Try to imagine being on the run, barely escaping a violent ruler with your life. In your hurry to escape, you are forced to leave behind life as you know it. Leaving behind family, friends, relationships and any sense of normalcy, you now have to make your way hundreds of miles across treacherous terrain in order to reach the border that promises safety. Likely, you join a caravan of immigrants in order to protect yourself on the dangerous journey from looters, thieves and robbers. Food and water are scarce, and it is nearly impossible to escape the natural elements because there is no shelter. As you reach your destination, the reality sets in that you have to start all over. You are living the life of a refugee.

This was the experience of Jesus and His family. Almost immediately after His birth, as an infant, Jesus and His family were refugees. Much like Moses, Jesus’ life was at risk due to a tyrannical madman (Exodus 2:1-10; Matthew 2:13-23). We don’t know much about Jesus’ flight to Egypt, except that Matthew recounts Mary, Joseph and Jesus escaping the grip of Herod as he sought to kill the young child. However, you can use your imagination to begin to understand how harrowing the journey must have been. Even after Jesus and His family return from Egypt, they are afraid to return to Judea because of the danger of living under Archelaus’ reign, so they took refuge in Nazareth.

Not only was Jesus’ early life marked by a refugee-like experience, He also endured similar circumstances during His ministry. He had no place to lay his head (Matt. 8:20), He was unwelcome in His hometown (Luke 4:14-31), He was dependent on others for financial support (Luke 8:3) and He suffered outside the gates of the city (Heb. 13:12).

In light of the current Syrian refugee crisis, it’s important that we consider the life of Jesus as a refugee. To be sure, the fact that Jesus was a refugee won’t necessarily speak directly to the national policies that we face, but it will help us form a Christian posture in this crisis. Kevin Vanhoozer remarks that disciples of Jesus are those who have been formed into the kinds of people who are walking across the stage of world history as Jesus would. Paul emphatically states that followers of Christ are those who have the mind of Christ (1 Corinthians 2:16). Thus, in every situation, disciples of Jesus are interested in cultivating and promoting distinctly Christian beliefs and actions.

From Outreach Magazine  Why We're Not Crazy for Believing in Jesus

At this moment, the world is facing the worst refugee crisis since World War II. According to the United Nations High Commissioner for Refugees, the number of displaced people is at the highest number ever recorded: 59.5 million, half of which are children. 14.4 million are displaced outside of their state border. Included is the ever-increasing number of Syrian refugees, which has now reached 9 million. The accounts from the ground are simply staggering. Many are dying, drowning, homeless, afraid and without hope.

Unfortunately, many are responding to the current catastrophe with a sentiment that is driven by fear and a desire to prioritize their own self-protection. There is no doubt that the refugee crisis, concurrent with the rise of global terrorism, is presenting unprecedented challenges for many in the West—challenges that, no doubt, could present legitimate threats to our own safety and security.

However, despite these legitimate threats, Jesus’ disciples are exhorted to be like Christ and to consider the interests of others before their own (Philippians 2:3-4). We simply cannot be the Church if we are unwilling to love our neighbors, seek justice and combat oppression. We must remember that we follow the One who was a refugee long before He bore a cross.

In this time of unprecedented crisis, Christians are called to respond with unprecedented compassion. For those of us who call Jesus Christ “Lord,” we must remember that our High Priest empathizes with the plight of the weak, broken and displaced. For Jesus, the refugee crisis is not merely stats or numbers; it is the kind of crisis that He can empathize with. The men, women and children who are fleeing, trying to escape with their lives, have a High Priest who knows what that is like. The Church, the global body of Christians, must demonstrate ourselves to be the kind of people who worship the Christ who once was a refugee Himself. If we fail to follow Christ’s lordship in this, then perhaps He is not our Lord at all.

One of the most important questions ever asked in the Gospels was asked by a lawyer. He asked Jesus, “Who is my neighbor?” Jesus’ response is one of the most well-known parables that has become ingrained into the social imagination of our culture—the Good Samaritan (Luke 10:25-37). Perhaps we would do well to revisit it. Jesus makes the point that to be a neighbor is to show compassion for those in need. Perhaps we should ask ourselves the question, “Who is our neighbor?” That will help us begin to cultivate a Christian posture.

In thinking about and responding to the refugee crisis, there are several ways that you can get more involved.

Ask the Lord to comfort those who are afflicted. Pray for peace. Pray for policymakers to use wisdom and discernment as they seek to engage what is one of the most complex and difficult issues to face the world in decades.

Through Samaritan’s Purse, you have the opportunity to help meet the physical needs of refugees who are fleeing to Europe from the Middle East, providing food, water and dry clothing.

Together with Pioneers, you can help deliver physical aid, holistic health care and discipleship resources to refugees in North Africa, the Middle East and Europe.