Home Features 3 Principles for Leading Through Times of Waiting 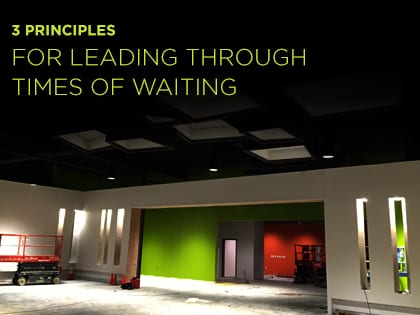 How to lead well even when your goals and dreams seem a long way off.

It took the nation of Israel some 40 years to complete a journey many suggest should not have taken more than 11 days. Similarly, it’s taken Mosaic Church of Central Arkansas nearly 10 years to move three blocks down the street—that is, to transition from renting an abandoned Wal-Mart to owning and occupying a newly renovated former Kmart.

Like the Israelites of old, throughout these long years we faced internal and external challenges. We experienced opposition and dealt with sin in the camp and in ourselves as leaders. We saw God miraculously provide when we weren’t sure if or how we could continue. We grew tired and weary, but we did not quit.

And so, on Jan. 3, we cross our own Jordan River—Colonel Glenn Road—to take possession of a Promised Land of sorts: a 100,000-square-foot building on 10 acres in the heart of Little Rock’s emerging University District.

The prayer, patience and persistence of our people through these years of waiting can be a model for church planters and pastors seeking to move congregations from survival to stability, and ultimately to sustainability, in a culture accustomed to overnight delivery, fast food service and high-speed Internet. Indeed, how can we keep people motivated and moving forward when dreams, desires and determination alone are not sufficient to overcome such challenges as finding a suitable space and the funds to acquire it, while simultaneously growing a congregation?

Here, from our own experience, are three things to keep in mind as you pursue big dreams over a long period of time.

On April 20, 2006, God made it clear that we would someday own the former Kmart. Yet it took six-and-a-half years for us to make the purchase.

From Outreach Magazine  Hope in the Midst of Failed Resolutions

During that time, an Arkansas based fitness company launched and grew to become the most successful of its kind in the state. In 2012, as we were getting ready to purchase the former Kmart, the owner of the fitness company offered us $3 million to open his ninth and largest store in 50,000 square feet of our new building. This helped us secure funding for our own renovations, and raised the value of the property from $1.5 million to $3.9 million in just over two years.

Maturity Is the Goal

Some wines, but not all wines, mature with age. So, too, it is with congregations. While you’re waiting for God to open a door, press on to maturity by pursuing qualitative growth over quantitative growth.

In our case, we strengthened relational connections through small groups, improved financial management and accountability, and added essential staff and lay leaders. In short, we addressed present needs with the future in mind and became a more mature congregation in the process. We were faithful to do what we could, and now, God has positioned us to do even more.

On my first short-term mission trip, in December 1980, I found myself on the dirt streets of Roatán, Honduras, with nothing more than a ball. Kicking it back and forth with a couple of kids, I soon attracted more. Within 30 minutes, hundreds of children were pressing in on me, cheering and screaming in delight, as I led them down the street to a schoolyard big enough to handle the crowd.

From Outreach Magazine  21 Signs Your Church Needs to Change

I have heard pastors suggest that if they only had more money, a better facility or additional staff, they could do more. What I’ve found, however, is that those who don’t learn to advance the mission of their church now, with their current resources, would likely struggle to advance the mission even if they had everything they wanted.

Pursuing a dream over a long period of time gives us an opportunity to walk by faith and not by sight; to stay the course and prove ourselves faithful to our calling; to recognize and value what really matters to God; and best of all, to be there when he comes through—in his way, in his time and for his glory.

Such is the confidence and hope that keeps a congregation motivated and moving forward during long years of waiting.

Mark DeYmaz is the founding pastor of Mosaic Church in Little Rock, Arkansas, and a co-founder of the Mosaix Global Network (Mosaix.info).