Home Features ‘We’re Not Growing. Why?’ 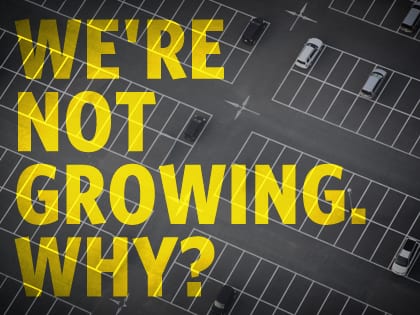 Q: We’ve got a great church family. But we’re not growing. We’re not reaching new people or making a difference in our community. I desperately want to lead our church to fulfill our God-given mission. What are some things I should consider?

First, you need to be aware of something I missed in the early days of my pastoral ministry: Everybody likes the idea of reaching new people (at least they say they do), but not everybody likes the reality of it.

I learned this the hard way. It cost me my first pastorate. I accepted the call to pastor a small church of 18 people. They had a building with a 250-seat auditorium and tons of educational space. And all of them—all 18 of them—said they wanted to grow, they wanted to reach people. They wanted a pastor who could lead the church to make a difference in people’s lives and impact their community. I took them at their word. It was a huge mistake.

Within six months, we had grown to nearly 100. Young, unchurched families were beginning to attend. People were coming to faith. We were scheduled to baptize 18 people in a baptistry that had been used for storage for years. Everyone was excited—except for the original 18. They hated it. They started having special small group meetings to discuss how to get “their” church back and how to get rid of me. And they got their way. They got “their” church back. I was out. All the new people left, and the original 18 kept talking and praying about how much they wanted to reach people and make a difference in their community. No surprise—they never did.

The Way Things Are

The truth is that most people like the church the way it is; that’s why they’re still attending. They like the people, traditions and activities. They’re comfortable. So when they say they want to reach new people, they mean as long as they don’t have to change anything, and as long as the new people are just like them and don’t mess up what they have going at their church.

Obviously, this isn’t going to happen. This can’t happen. It takes change in order to start reaching people and having an impact on a community. When a pastor and church are successful, all the new people will change the church. After all, churches are simply a reflection of the people that attend.

Here’s my point: There’s usually a reason a church doesn’t reach new people or grow over the long haul, and it usually has something to do with the people in the church. After all, if everyone in the church genuinely wanted to reach new people, wouldn’t the probability be for them to achieve that goal? Yes. Wouldn’t they be willing to do whatever it took? Yes, again.

With a little more experience and wisdom in my first ministry, I would have recognized that their words didn’t fit their reality. They were down to 18 people for a reason. In spite of what they said, they didn’t want anyone else. They liked the church just the way it was. It was “their” church.

Defined by the People

What we pastors and spiritual leaders need to remember is that churches are defined by their people. Churches don’t change because leaders change policies, structures or strategies. If the people won’t change, no matter how much leaders change the organization, nothing will change.

This is where I blew it in my first ministry. I did leadership to people. I made the changes that were necessary to attract and reach new people. It worked. But I failed in helping the existing people understand and embrace the changes. Of course, even if I had focused on them, I may have failed. Some people aren’t receptive to truth, even when communicated and lived out with compassion. Jesus’ ministry is evidence of this reality. But this is our calling: to seek to lovingly confront people with God’s truth—in the way we live, lead and teach. And: to help people to genuinely follow Jesus and fulfill both his Great Commandment and Great Commission.

This is where you need to begin. Start seeking to lead your church family to genuinely embrace and become compassionate about reaching new people.

It won’t be easy. It will take time. Not everyone will buy in. Some will dig in and fight everything you’re trying to do. Some—perhaps many—will leave. Of course, you’ll be in good company. Jesus had the same problem. But he also changed the world. It’s time more of us who are called to follow him make the choice to be like him, come what may.

The truth is, the church I have the privilege of pastoring, NorthRidge Church, owes as much of its success in reaching new people to those who left our church as it does to those who remained, and to the new who came. Sometimes, the greatest gift a pastor can receive is for the right people to leave.

From experience, I know that it can personally hurt. It can feel like a professional setback. There have been a ton of different seasons at NorthRidge where it seemed we were losing more than we were reaching. But in the end, it can move you forward in significant ways. The church can’t move forward when it’s being weighed down by too many anchors—people digging in their heels and holding on for dear life—as if it’s “their” church. It’s vital that we lead forward, through, around, over and past them. His calling and will demands it.

This is the advantage a growing church has. All the new people coming in and experiencing life change have a natural passion and excitement to share it with their friends and invite them. They also have influence with a brand new circle of people who have never been exposed to the church or the message of Christ. When this happens, it’s like there is wind in the sails. The church is going forward in spectacular fashion. When a church isn’t growing, the opposite is true. It’s dead in the water and all excitement and hope is drained out of the people.

This is where leadership is really needed. In all four churches I’ve pastored, we’ve had these hopeless moments. Nothing was happening. The only movement in the church was out the door to other churches. It was depressing. So it was my job to remind and challenge those remaining with God’s truth about his church.

* When he’s at work, he builds the church and the gates of hell don’t prevail.

* His promise, power and calling are in our lives

* We have the privilege to know him and share him with the world.

* You must reach out to the people in your sphere of influence.

And it was my job to encourage and equip them to do the hard work of living by faith, not by sight. This is what Jesus did with his disciples in their very dark world. It worked. They changed their world. I’ve had the privilege of seeing it work in our world. After all, God’s Word is true. When acted upon, it changes us—and ultimately those we love and tell.

The key is to get the genuine believers in our churches embracing their God-given calling to be light in this world of darkness, to be witnesses in their spheres of influence. When God’s people start showing God’s love, sharing God’s truth and seeking to involve those around them in the work God is doing, it makes an impact. People are drawn to this kind of community. When this happens, the wind starts blowing, the sail starts billowing and the church starts moving again. New people start walking through the doors of the church. It’s a wonderful experience.

But there’s one last vital issue to consider: When people do walk through the doors, it has to be a positive, meaningful, relevant, authentic, helpful, life-enhancing experience. They have to find the people in the church as warm and inviting as those that attracted them to come in the first place. They need to experience God’s people showing God’s love, appropriately sharing God’s truth, open-armed and welcoming. They have to feel expected, wanted and loved. This needs to be the experience in every area of the church, from the parking lot, into the lobby, in the auditorium (where the best seats aren’t filled by insiders but left open for guests), in the programming (not just relevant for insiders but meaningful for new people), in the children and student ministries and in the outreach focus of the church. It needs to be a place that genuinely exhibits God’s love for the world—for them.

Do it and crazy stuff happens—because, when this happens, God shows up. And that always changes everything.