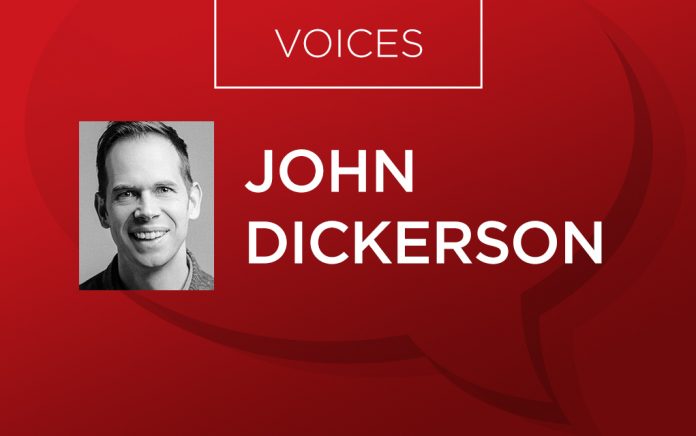 A Journalist Explores the Credibility and Impact of Christianity

Jesus Skeptic: A Journalist Explores the Credibility and Impact of Christianity
(Baker, 2019)

WHO: John Dickerson, an investigative journalist and lead pastor of Connection Pointe Christian Church in Indianapolis.

HE SAYS: “I aim to conclude whether the teachings of Jesus have anything meaningful to offer to you, to me, and to modern progressive society.”

THE BIG IDEA: A millennial pastor and journalist explores whether Jesus really lived, looks at how his story has changed the world, and presents the evidence of how Jesus followers have helped fight for justice throughout time.

THE PROGRESSION:
Filled with pictures, this book is broken into three sections. Part 1, “Skeptics Welcome,” lays out what the author hopes to accomplish by looking at the evidence this book offers to prove Jesus’ credability.
Part 2, “Measuring Christanity’s Impact on Society,” looks at life before Jesus and his influence on people who have made a difference in medicine, education, the end of slavery, literacy and more.
Part 3, “The Most Influential Person,” answers the question as to whether Jesus existed, what his impact was, and what that all means to individuals today.

“The power is not in Christian denominations, buildings or religious rituals. Those things come and go, but the movement of Jesus across humankind and across history continues advancing.”

A CONVERSATION WITH JOHN DICKERSON

What do pastors need to understand about the type of apologetics that millennials respond to?

Speaking as a millennial and a former skeptic, I see three millennial values that can be on-ramps for introducing Jesus: We value social justice. We are visual. We want to be smart forces for good in our world. With the book I framed a new discussion about Jesus, skewed toward these values.

Most in my generation are not wondering “Is Christianity right or wrong?” Instead, they want to know if Christianity is good and helpful, if it will help them make a better society. So instead of building a detailed argument that Christianity is “true” (though I believe it is), Jesus Skeptic builds a visual case that Christianity is good. Anyone who wants to make the world a better place should consider Jesus because it was Jesus’s ideas that drove Martin Luther King, Jr., Harriet Tubman, Frederick Douglass and dozens of other social justice heroes. In a time of loud opinions, I let MLK and these other heroes speak about Jesus for themselves–by showing images of their personal journals and writings.

Objective truth is still the backbone of Christianity, but we can no longer use it as the front door for our apologetics because we’re speaking to a post-truth generation. Thankfully this generation does value social justice, and we can show them that this value was Jesus’s value and that heroes of social justice they already admire were devout believers in Jesus, according to their own writings and claims.

How can church and ministry leaders use the information in your book to reach younger generations for Christ?

We can use it with our teenagers, college students and millennials in their 30’s. When I was a teenager, raised in a Christian home, I began doubting if Jesus had even existed. I think these basic doubts are more common that Christian parents or pastors realize, so I’ve designed the book to speak to a doubter visually, through images. A casual scan of the book shows hundreds of interesting images–everything from Josephus’s writings about Jesus to ancient coins bearing the image of non-Christians who wrote about Jesus in his era. The young person who flips the pages of Jesus Skeptic will see charts showing that women’s rights increase when Christianity increases in a society. They will see footnoted rankings of the world’s best universities and hospitals–all of which were founded by Christians as the documents, charters and evidence shows.

Teens, millennials and skeptics also want to know if Christianity is anti-intellectual or for stupid people. In Jesus Skeptic, I show that brilliant thinkers like Isaac Newton, Blaise Pascal and many of the smartest people who have ever lived were fanatical believers in Jesus as God. I actually show pictures of their writings about Jesus. It lets our young people see that if they believe in Jesus, they stand intellectually with many of the brightest minds in history. They also stand intellectually with Dr. Francis Collins, a living scientist today who is director of the National Institute of Health.

In a similar way, many of our young people feel torn between “social justice” and Christianity. Jesus Skeptic shows them that the two are not in conflict. If we believe the claims of Jesus, then we stand shoulder-to-shoulder with the Anti-Slavery Society that ended slavery in the United States. I show the Scripture in their writings, for example. Sincere followers of Jesus inherit a movement that has brought education, literacy, healthcare and human rights to societies around the globe. Jesus Skeptic gathers this family tree of Christianity’s positive social influence, and it does this in a way I’ve never seen anywhere else.

How has the response been to your book?

My favorite response was a 15-year-old skeptic named Cady. She was attending our church with her dad, who had recently been baptized. Cady told him that she doubted if Jesus had even lived. We got an early draft of Jesus Skeptic to Cady. As she saw the ancient artifacts, images, and sources, she became convinced that Jesus did in fact live. By God’s grace, as Cady continued reading, she chose to believe. We got to baptize Cady this past May. My prayer is that many thousands of skeptics like Cady will come to life-changing and soul-saving faith as a result of the Jesus Skeptic book. I’m praying that many youth groups, pastors, and parents/grandparents will get this resource into the hands and hearts Cady’s all around the world. In my own journey, Josh McDowell’s book Evidence that Demands a Verdict brought me back to faith intellectually. My prayer is that God will use Jesus Skeptic in a similar way to reach young people who are wandering or pre-wandering.