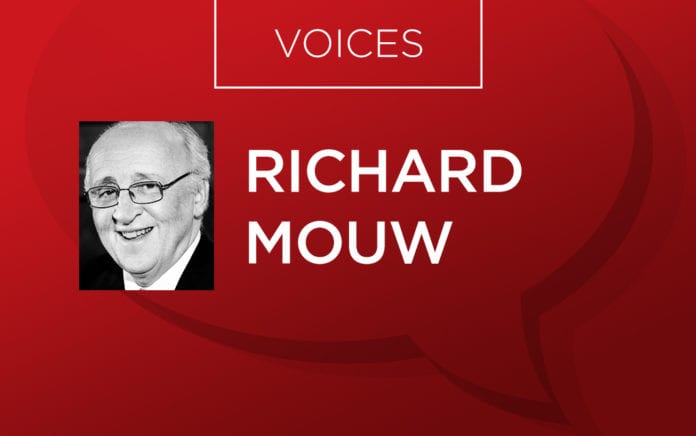 Holding Evangelical Beliefs in a World of Contested Labels

WHO: Richard Mouw, professor of faith and public life at Fuller Theological Seminary and a regular columnist with Religion News Service.

HE SAYS: “The only way to be a properly functioning evangelical is to keep arguing about what it means to be an evangelical.”

THE BIG IDEA: We should hold on to the essentials of evangelicalism while moving forward in light of God’s Word.

THE PROGRESSION:
This book offers a thoughtful defense of evangelicalism as a spiritual tradition while providing some cautions and correction. It wrestles with what it means to be an evangelical Christian today.

“I hope that many of us can stay restless as we hold on while exploring together whether the best way to remain faithful to the legacy is to let go of the label.”

A CONVERSATION WITH RICHARD J. MOUW

Why do evangelicals get uptight when it comes to the mystery of God and the Bible?

In our devotional and worship lives, we evangelicals major on mystery. At the heart of it for us is the amazing reality that God saves the likes of us. I was at a gathering recently where we sang “I stand amazed in presence of Jesus the Nazarene / and wonder how he could save me, a sinner, condemned unclean / How marvelous, how wonderful.” People around me were shedding tears as did I. Amazement, wonder, marveling—that’s all about mystery. The hymn I just quoted is older generation stuff, of course—and the gathering I attended was on the older generation side. But it does not get any less mystery-oriented with the younger folks. Praise music is all about wonder and amazement at what God does for us in Jesus.

The rub comes, though, when we start doing theology. Then we get a little fearful of too much mystery. We want clear formulations that don’t allow for much ambiguity. This is a little overstated, but I am inclined to say that mystery abounds when we are talking to God, and mystery gets short-shrifted when we are talking to each other, especially about matters were we might put things differently. This has a lot to do with the fact that evangelicalism as we know it in North America is a movement that has been energized by memories of past battles. In the early decades of the 20th century we fought the liberals, and in institutional terms we typically lost: The liberals took over seminaries, churches, denominational leadership posts. In later decades we fought among ourselves. And we continue to do so: Even today many of my evangelical theologian friends can get quite heated in arguments about whether inerrant is a better word to describe biblical authority than infallible—even though both sides of the argument would reject any notion that the Bible is wrong in what it tells us about God’s will for our lives. And as a supporter of the ordination of women, I often experience folks drawing a line in the sand between me and them simply on this issue, even though we agree on all other major points of doctrine.

I said that the younger generation loves to sing about mystery. And they do not have the lingering memories of past battles. So many of this generation are willing to live with much more mystery in theological and even practical/ethical matters. Sexuality is an obvious area. A student said this to me recently: “My sister is a lesbian in a committed relationship. My parents have rejected them. I haven’t. I still hold to what the Bible teaches, but I love the two of them. I’m glad they are active in a church that accepts them, even though I can’t stand that church’s theology. I just keep loving and leave it up to the Lord to work in their lives as he chooses!”

I have sympathies for her testimony. But I also care about being clear about biblical teaching. I think we need more intergenerational dialogue about these things. Very frank and nondefensive dialogue. Younger evangelicals need to understand the memories that have shaped our movement, but the older generation needs to allow the younger folks to open us up to more mystery.

You write that political engagement for Christians should mean careful listening to those who do not share our faith. Should pastors model this behavior to their congregations?

I am not excited about churches endorsing political specifics. I see the role of the local church as focusing on two things: First, regularly reminding us of the general mandate to serve the Lord in all areas of life, including political life, making it clear that the Lord cares about—among other things—political concerns. He is a God who loves justice, who cares about the marginalized and the oppressed; he wants us to promote hospitality to strangers and to love our enemies. How all of this works out in actual public policy should be prayed about, debated, studied by Christians, which is best done in small groups, dialogue events and action groups where Christians seek to discern the will of God on an issue like immigration or voting rights.

Second, spiritual formation for our public lives. We evangelicals have a reputation these days for being mean-spirited people. It is not enough simply to learn more about politics. We need to work on character issues. I love the verse in 1 Peter 3 that tells us to be ready when asked to give a reason for the hope that is in us. But we also need what comes next: “But do so with gentleness and respect.”

In what practical ways can a worship service be a place where we are equipped for God to send us out into the world to serve him?

I think we need to humanize many of the policy issues and this can happen well in sharing stories. A pastor wonders how to get his people—a small-town white congregation—to care about racial justice. Here is a strategy. Find an inner city African-American congregation and arrange with the church leadership to share prayer requests. This can be an assignment for the tech-savvy group. They can find ways on their smartphones to do short video interviews with persons from the urban church about what we can pray about in church next Sunday. Then show an interview or two before the pastoral prayer. And reverse the process for the urban church. Put faces on real hopes and fears. Personalize our sense of the body of Christ. This can do a lot more than could be accomplished by, say, a sermon that condemns racism.

From Outreach Magazine  2011 Outreach Resources of the Year Panelists

Other ideas: Have teaching Saturdays—a guest speaker who leads discussions about immigration or poverty or right-to-life issues. Book discussion groups. Film nights, where cross-cultural dramas are a part of the mix. Have people discuss, say, on a weekday evening, how news gets reported. Take a key current issue and show a two-minute Fox News report and then a two-minute CNN report. Don’t ask folks what they agree with but discuss how the same issue gets portrayed in two different ways. What happened that created strong responses in viewers?

What is lacking these days in the Christian community is the capacity for empathy with those with whom we disagree. In his book about showing hospitality to Muslims, Matt Kaemingk tells about some older evangelical women in the Netherlands who simply invited some Muslim women to join them to knit together each week. After a while it was natural for a Christian woman to ask a Muslim woman, “Who is that sweater for?”

“How many grandchildren do you have?” and so on.

After a while they could even talk about how they experienced their prayer lives. No big agenda but a lessening of widespread Islamophobia. Empathy. Relationships. Sharing stories. Always with the hope that the Lord opens ways to show the love of Jesus. “With gentleness and respect.”