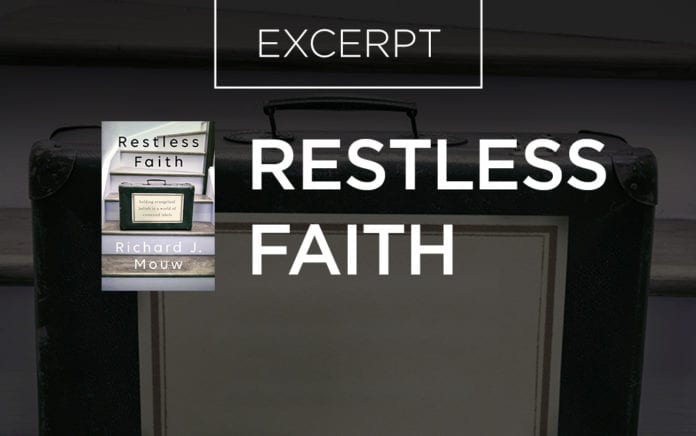 Was Christ’s work on the cross vertical, horizontal or both?

In chapter 9, I referred to the sense of mystery that has characterized much evangelical spirituality, and I complained that this does not automatically translate into an acknowledgment of mystery in our theological formulations. This disconnect seems clear to me in our theology of Christ’s atoning work, particularly with reference to the “he died for me” element in traditional evangelicalism. One way to group the different strands of atonement theology is under two headings: vertical and horizontal. The vertical category depicts, in different ways, the central significance of the cross in terms of a transaction that took place within the Trinity, typically between the Father and the Son: Jesus offered himself up to the Father; he paid a debt that we humans could not pay on our own; he hung in our place, offering himself as a sacrifice for sin.

The horizontal conceptions see what happened on the cross as primarily a transaction between Jesus and humankind. He showed us the nature of true forgiveness by refusing to be vindictive toward those who were putting him to death; he modeled for us the nature of self-sacrificial love; in the midst of his own extreme suffering he expressed a concern for the well-being of others.

The influential modernist preacher Harry Emerson Fosdick was a thoroughgoing horizontal who described the vertical position in this way in his classic 1922 sermon “Shall the Fundamentalists Win?”: The defenders of the traditionalist view of redemption, he says, insist “that we must believe in a special theory of the Atonement—that the blood of our Lord, shed in a substitutionary death, placates an alienated Deity and makes possible welcome for the returning sinner.” That kind of negative depiction has taken on an even harsher tone in recent years, as some feminist theologians have characterized the vertical views as portrayals of “divine child abuse.” The most extreme version of this characterization has come from Joanne Carlson Brown, who argues that Christianity has to purge itself of the idea of a “bloodthirsty God,” one who requires that “a blood sin upon the whole human race can be washed away only by the blood of the lamb.” All of this must be rejected, she says: “We do not need to be saved by Jesus’ death from some original sin. We need to be liberated from this abusive patriarchy.”

While not addressing the “child abuse” objection explicitly, the great John Stott has offered a helpful way of responding to this kind of criticism when he warns evangelicals against adopting any picture of the atonement in which the Son is a victim who stands over against a Father who is in turn “a pitiless ogre whose wrath has to be assuaged.” Says Stott: “Both God and Christ were subjects not objects, taking the initiative together to save sinners. Whatever happened on the cross in terms of ‘God-forsakenness’ was voluntarily accepted by both in the same holy love which made atonement necessary.” While the words “satisfaction” and “substitution” must never “in any circumstances be given up,” Stott argues, we must also be very clear that “the biblical gospel of atonement is of God satisfying himself by substituting himself for us.”

The substitutionary theme is still quite alive in evangelical hymnody and theology. But when evangelical social activism emerged in the 1970s, there also was an embrace of a particular horizontal perspective, the Christus Victor portrayal of the atonement as made popular by John Howard Yoder in his influential—among activist evangelicals—book The Politics of Jesus. Here Yoder places a strong emphasis on Calvary as a decisive encounter with the powers of evil. The human authorities, representing political, economic, military and religious forces of the day who collectively crucified Jesus, were in fact acting in the service of spiritual “principalities and powers,” who did all they could to destroy the Son of God.

But Jesus “accepted powerlessness, and in doing so had victory over them. His death and resurrection are clear testimony to the futility of relying on violence and other forms of coercive power to solve the fundamental problems that plague us in our humanness.”

When I introduced the horizontal category above, I characterized it as representing those views that see the cross as a kind of ethical teaching event. In his dying Jesus shows us something about how we are to live. The Christus Victor view goes a step beyond that. It is not vertical in that it explains what happened on the cross without making explicit reference to some transaction that took place, as it were, within the Trinity. Rather, it sees the death of Christ as a dramatic encounter with the spiritual principalities and powers—which shows us how we are to live our lives in response to that encounter. We too must confront the evil powers, refusing to be held captive to the various “isms” that they use to hold us in their sway—militarism, consumerism, and the like. While we outwardly live within the social structures over which they claim to have authority, we do so in the confidence that they are already defeated enemies. Thus we follow the example of Christ, who allowed the visible authorities to nail him to the cross—a “voluntary subordination of one who knows that another regime is normative.” The fate of the evil powers has been sealed. To use their coercive methods to try to defeat them is to fail to grasp the victory that has been achieved by accepting the “powerlessness” of the cross.

This view, of course, has significant advantages over the more liberal “be like Jesus” approach of Fosdick. The most obvious difference is that the Christus Victor perspective insists on a strongly supernatural account of the redemptive mission of Jesus. The crucified Christ does not merely provide us with an example of how to live; he also makes that life possible by a decisive engagement with the spiritual forces of evil. He did something on our behalf that is of cosmic importance: He defeated the principalities and powers. His resurrection is a clear proclamation of his victory.

While I have serious disagreements with some of the ethical aspects of Yoder’s approach, I have learned much from his perspective. Christ’s redemptive work certainly does have real implications for our lives as consumers and citizens. The multifaceted work of the cross did indeed include a decisive encounter with the invisible powers of evil. The biblical basis for the Christus Victor depiction is set forth clearly and succinctly in Colossians 2:15, where the apostle Paul says that Jesus “disarmed the powers and authorities, [making] a public spectacle of them, triumphing over them by the cross.”

What I find missing in many presentations of the Christus Victor perspective, though, is the biblical insistence on a clear link between this aspect of Christ’s atoning work and the “he died for me” aspect of the other biblical themes. Indeed, that link is clearly on display in the passage I just cited from Colossians 2. The reference there to the “disarming” of the evil powers is immediately preceded by this characterization of the substitutionary work of the cross: “When you were dead in your sins and in the uncircumcision of your flesh, God made you alive with Christ. He forgave us all our sins, having canceled the charge of our legal indebtedness, which stood against us and condemned us; he has taken it away, nailing it to the cross” (Col. 2:13–14).

That the two perspectives—“substitution” (vertical) and “disarming the powers” (horizontal)—must be held together within a biblically faithful understanding of the atoning work of Christ is well understood by N.T. Wright. He has been a strong defender in recent years of the Christus Victor perspective—so much so that some of his evangelical critics have charged him with simply denying the substitutionary dimension of the atonement. But not so. Here is Wright: “Jesus, the innocent one, was drawing on to himself the holy wrath of God against human sin in general, so that human sinners like you and me can find, as we look at the cross, that the load of sin and guilt we have been carrying is taken away from us.”

Each of our individual burdens of shame and guilt have been nailed to the cross. Evangelicals have always insisted on that message as central to the proclamation of the gospel. Again, there are a variety of images for capturing this emphasis. What they have in common is this: They point us to the fact that on the cross of Calvary, Jesus did something for us that we could never do for ourselves as sinners. He engaged in a transaction that has eternal consequences for our standing before a righteous God.