Home Resources 5 Rather Surprising Findings About Growing and Declining Churches 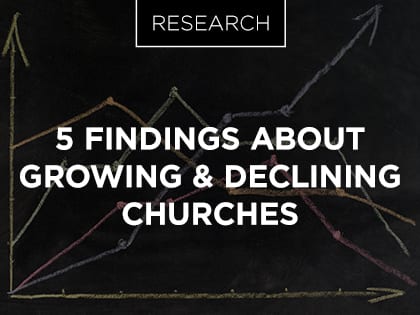 In The Unstuck Church Report, we’ve uncovered surprising findings about the trends in growing and declining churches.

My team at The Unstuck Group and I are on the ground serving in hundreds of churches of all different sizes each year, and I can confirm his observations.

The difference between growing and declining churches is something we’re particularly attuned to. We serve churches in both of those situations: some enlist our help because they’re in decline, and others engage our team to take steps to guard against getting stuck in the future, even as they are in growth mode today. We’ve been tracking some data along these lines for a while now.

Each quarter we share a short report on our findings—The Unstuck Church Report. When I was analyzing the data for the Q2 2018 report, some things really surprised me. Just to be clear—this isn’t a comparison of big churches versus smaller churches. This is data that’s comparing growing churches to declining churches. Both sets of data include churches of fewer than 100 people and megachurches with more than 2,000 people.

Here are five of the findings that stood out to me:

Initially, this was the biggest surprise for me in all of these findings. Growing churches are still connecting 40 percent of their adults and students in regular serving opportunities, but the engagement in declining churches is even higher.

First, growing churches tend to reach more new people, and our data confirms they’re reaching more people who don’t yet have a relationship with Jesus.

Like with giving, there’s usually a lag in the time it takes for people to cross the line of faith and then mature in their faith before they give their money and their time. Actually, we’re hearing from the churches we serve that the “volunteer lag” may be longer than the “giving lag” when new people connect to the church.

3. Participation in Smaller Gatherings, Either Home Groups, Sunday School or Other Alternatives, Is Higher in Growing Churches.

From Outreach Magazine  The Gift of Eyes and Ears

Here are a couple of my observations regarding staffing:

Declining churches tend to have many more ministry programs.

The more programs and events that a church offers, the more staff are required to support these efforts. Then when staff are hired, they tend to create additional programming and events to justify their positions. It’s a vicious cycle that’s difficult to break.

One of the churches we served had attendance decline for several years to the point the church was half the size it was about five years ago. In that same time, though, no staffing adjustments were made to reduce the number of employees.

Finally, when churches maintain a lean staff, they tend to hire stronger leaders.

In other words, they’ve learned they can accomplish more through fewer leaders who know how to develop and empower lay leaders and volunteer teams.

In all the data I analyzed, this appears to be the most significant difference between growing and healthy churches. In other words, the span of care (for leading, mentoring, discipling, etc.) is far healthier in growing churches.