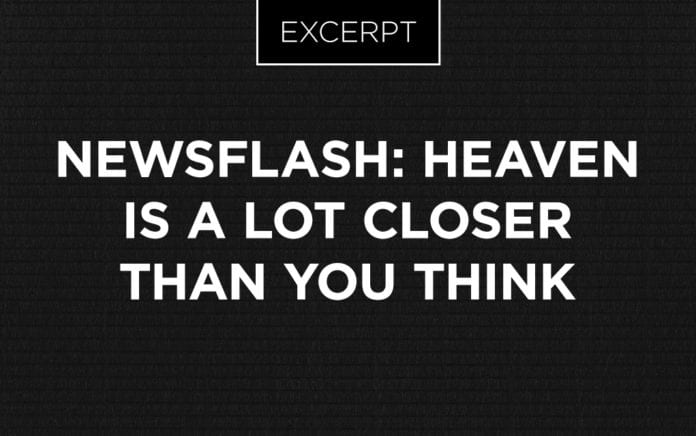 Jesus preached the good news that the kingdom of God is now available to us.

Excerpted From
Eternity Is Now in Session
By John Ortberg

Where do you get your news?

Jesus was, among other things, in the news-announcing business. That may sound odd; we often think of news as a modern invention. Yet we read that “Jesus went throughout Galilee, teaching in their synagogues, preaching the good news of the kingdom and healing every disease and sickness among the people. News about him spread all over Syria” (Matt. 4:23–24, emphasis added).

There’s a key distinction here that we can miss. Jesus teaches—he gives instruction or advice on how to live. But he also preaches, or proclaims. Today we associate preaching with churches and telling people what to do. But preaching wasn’t used that way in Jesus’ time. It wasn’t even a religious word. It was a “news” word. Jesus went around announcing that something had happened. And it wasn’t just news; it was good news. That’s what the word gospel means.

Most people have heard of the word gospel. But most people—even most church people—do not know the gospel that Jesus himself announced.

So what is the good news that Jesus himself proclaimed?

Jesus’ good news—his gospel—is simply this: the kingdom of God has now, through Jesus, become available for ordinary human beings to live in.

Some people teach that the only real reason Jesus came to earth was to die on the cross. But death on the cross was only one part of his mission. His overall mission was to be the kingdom bringer.

His one gospel was the gospel of the availability of the kingdom.

His one purpose was to model the reality of that kingdom in his life, death and resurrection.

His one command was to pursue the kingdom.

His one plan was for his people to extend the kingdom.

So what is the kingdom? It is the sphere in which everything that happens meets with God’s approval and delight. Everything is precisely as God wants it to be—where the greatest humble themselves like little children. There are no big shots. No arrogant egos. No one ever has an anxious thought. Every encounter between people causes them to walk away with more joy than they had before they met. As the apostle Paul says, “The kingdom of God is not a matter of eating and drinking, but of righteousness, peace and joy in the Holy Spirit” (Rom. 14:17). Watching over this whole realm as its greatest servant and most joyful caretaker is the magnificent God—the Father of Jesus—who is endlessly celebrated for his infinite, self-giving love.

From Outreach Magazine  Does Discipleship Lead Naturally to Evangelism?

This, Jesus said, is the kingdom of God. It exists. Right now. People you know and love who trusted God and have died and gone before us are immersed in this reality right now.

Then there is the “kingdom of the earth.” How’s that going?

Violence. Betrayal. Thousands of babies dying daily due to malnutrition. Women being sexually assaulted or marginalized or objectified by men. People killing others in the name of religion. God’s creation getting polluted. Vows of fidelity being broken. Racial injustice constantly smoldering and often exploding. Culture wars. The politicization of almost everything. Cynicism and fear and depression and isolation. Who does it look like is running the show here?

Things in the kingdom of the earth are not going well. There is not much good news for the poor or weak or old or plain or uneducated or vulnerable.

But Jesus has a plan. He describes it in the world’s most famous prayer:

“Our Father, who art in heaven,
Hallowed be thy name.
Thy kingdom come,
Thy will be done on earth as it is in heaven.”

In other words, “Here’s my plan. I’m going to bring this down here.”

Like a lot of Christians, I grew up praying the “Beam me up, Scotty” prayer from the old Star Trek series. I thought we were supposed to ask God to get us out of this messed-up earth so we could go to heaven.

But Jesus taught a different prayer. Not “Get me out of here so I can go up there.” But “Make up there come down here.” “Make things down here run the way they do up there.”

Jesus told us to ask God to bring heaven—“your kingdom,” “your will”—down here to my office, my neighborhood, my small group, my family, my country. Starting with my life, my body, my little kingdom.

Jesus’ gospel involves the greatest offer of all time. The salvation of your whole life, both now and then. Not just getting you into heaven but getting heaven into you. When you get what Jesus is offering, it’s like finding treasure in a field that you’d sell everything to possess and laughing all the way to the bank. If it were a late-night TV infomercial, you’d call without delay.

It is good news.

Many people do not understand that this was Jesus’ message, his plan, his good news. Even people who are actively involved in church life were taught to pray, “Beam me up.”

But Jesus never told anybody to pray, “Get me out of here so I can go up there.” He said we were to ask God to establish his kingdom where we are.

Jesus’ gospel is not about something that might happen sometime in the future. It has already begun. In him. In hiddenness. In sacrificial love. Right in the midst of the kingdoms that oppose it.

You may wonder, If the kingdom has come in Jesus, why is the earth still a mess? Why are pain and suffering still with us? And the answer—which took the early church decades to come to grips with—is that other “kingdoms” still remain. Other wills that are opposed to God’s will are still present. Thank God, because one of those stubborn wills is mine. One day all opposition will end. But it endures now because God chooses to act not with coercive power but in suffering love.

When Jesus was born, Rome had a gospel. An old Roman inscription read, “The birthday of the god [referring to Caesar Augustus] was the beginning for the world of the glad tidings [Good News, gospel] that have come to men through him.”

The gospel of Jesus is a claim that Rome’s “good news”—a “good news” purchased by violence and fear—is fake news.

No merely human kingdom can redeem and transform the earth. Only King Jesus can do that.

His ultimate success is certain. And if you want, you can be a part of his kingdom. Right here. Right now.

Excerpted from Eternity Is Now in Session: A Radical Rediscovery of What Jesus Really Taught about Salvation, Eternity, and Getting to the Good Place by John Ortberg, Copyright © 2018. Used by permission of Tyndale House Publishers, Inc. All rights reserved.