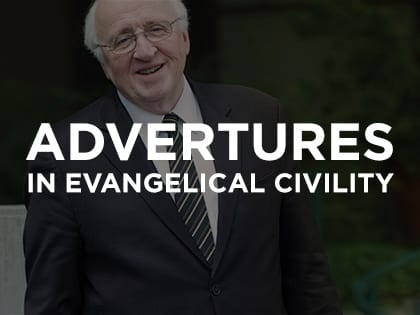 “A person can have what we see as a highly defective theology, and yet we can still acknowledge that the person’s heart has been transformed by the power of the gospel of Jesus Christ.”

Of Hymns and Dialogues

In October 1997 a group of Catholics and evangelicals issued a joint statement with the title “The Gift of Salvation.” A central focus of the document was the doctrine of justification by faith, which had—beginning with the very origins of Protestantism in the sixteenth century—long been seen as the central point of disagreement between Catholics and Protestants. The joint statement affirmed much more agreement than had been apparent in the past and emphasized the fact of their shared “unity in Christ.”

The document was issued by a group called Evangelicals and Catholics Together, whose earlier declaration, “Evangelicals and Catholics Together: The Christian Mission in the Third Millennium,” published in the spring of 1994, had been seen as a breakthrough in relations between Catholics and evangelicals. I was one of the signers of both the 1994 and the 1997 documents. And I considered myself to be in good evangelical company in my involvement. Some of the key leaders on the evangelical side were stalwarts: Charles Colson, Bill Bright, James Packer, and Timothy George, among others. The documents received considerable publicity, both in the secular and the religious press.

The effort was touted by many in both the evangelical and the Catholic communities as a manifestation of what Timothy George labeled “an ecumenism of the trenches.”

People on both sides of the traditional divide had been finding each other in various local and national causes, particularly on matters of social concern, and out of that kind of cooperation theological discussions had begun to take place, and new levels of mutual understanding were reached.

Not everyone was happy with what “Evangelicals and Catholics Together” was accomplishing, however. A number of evangelical leaders, particularly those representing strong Calvinist convictions, spoke harshly of the project. One such critic was the well-known pastor and author John F. MacArthur Jr., who was particularly disturbed by the group’s treatment of justification by faith. In his critique, MacArthur took the evangelical participants to be saying “that while they believe that the doctrine of justification as articulated by the Reformers is true, they are not willing to say that people must believe it in order to be saved. In other words, they believe that people are saved who do not believe the biblical doctrine of justification.”

My response to this charge is “Of course!” That is precisely what I believe, and there is much solid Christian support for this response. To start with what is so obvious that I would be surprised if MacArthur would dissent, if by “believing” the doctrine we mean being able to give a clear articulation of it, then certainly the vast majority of the saved fall short. My maternal grandmother was a deeply godly woman who was a member of the choir at her Reformed congregation. She sang much about salvation— “Jesus paid it all, all to him I owe. …” “O for a thousand tongues to sing my great redeemer’s praise. …”—but I am quite sure she could not have answered with any degree of precision a request to explain “justification by faith.” And evangelical pastors are not being theologically defective when they regularly assure parents of three-year-olds who have died that their children are in heaven—even though those boys and girls could not have explained justification at that stage in their young lives.

Of course, the evangelical critics of the joint Catholic-evangelical declaration were making a somewhat more precise point. My grandmother did not oppose the Reformation doctrine of justification by faith. Nor do the three-year-old children of evangelical parents. MacArthur and others are clearly thinking about people who sincerely and knowingly teach an alternative to our understanding of justification.

By denying our version of the doctrine, the argument goes, Catholics and others are making it clear that they are not putting their trust in Jesus Christ alone, and his atoning work, for their salvation.

Here too I see the MacArthur-type view as deeply misguided. And rather than getting into a detailed discussion of the doctrine of justification itself, I rely heavily on the support for my perspective by persons whom most theologians would consider to be unimpeachable adherents to evangelical orthodoxy. Since the issue at stake figures into criticisms I have regularly received regarding, for example, topics relating to our evangelical dialogue with Mormons (and I will get around to that subject soon), I have assembled examples of such supporting affirmations—each of which comes from thinkers of strict Calvinist conviction. The first of these supporters is Charles Hodge, the great theologian of the “Old Princeton” of the nineteenth century. One thinker whom Hodge regularly singled out for criticism in his three-volume Systematic Theology was the German theologian Friedrich Schleiermacher. When Hodge had studied in Germany in his younger years, he had seen firsthand the influence of Schleiermacher’s liberal theology.

Hodge was deeply disturbed by Schleiermacher’s embrace of the rationalist critique of biblical authority, which had the effect, Hodge insisted, of undermining the most fundamental tenets of the historic Christian faith, including the full divinity and atoning work of Jesus Christ.

At one point, though, where Hodge is setting forth his critique of Schleiermacher—who had by this time been dead for several decades—he offers, in a footnote, a brief personal comment about the person whose theology he has been criticizing. He tells how, as a student, he had frequently attended services at Schleiermacher’s church. He was taken, he says, by the fact that the hymns sung in those services “were always evangelical and spiritual in an eminent degree, filled with praise and gratitude to our Redeemer.” He goes on to report that he had been told by one of Schleiermacher’s colleagues that often in the evenings the theologian would call his family together, saying: “Hush, children; let us sing a hymn of praise to Christ.” And then Hodge adds this tribute to Schleiermacher: “Can we doubt that he is singing those praises now? To whomever Christ is God, St. John assures us, Christ is a Saviour.”

My second supporter, also from the nineteenth century, is Herman Bavinck. In his systematic writings, Bavinck frequently criticized Roman Catholic theology, not in the least because of what he saw as the Catholic emphasis on salvation by good works. But here is a comment he offers at one point about that element of Catholic thought: “We must remind ourselves that the Catholic righteousness by good works is vastly preferable to a protestant righteousness by good doctrine.

Furthermore, we must not blind ourselves to the tremendous faith, genuine repentance, complete surrender and the fervent love for God and neighbor evident in the lives and work of many Catholic Christians.”

My third example is from a personal conversation with the late Cornelius Van Til, longtime professor of apologetics at Westminster Seminary. I visited him once in his Philadelphia home, shortly after I graduated from college, and asked him some questions about his stern rejection of Karl Barth’s theology. While others in the evangelical world were welcoming many of Barth’s contributions as a clear step back toward traditional orthodoxy, Van Til—as I have already mentioned—was insisting that Barth’s theology was nothing more than “the new modernism” in disguise.

In posing a question to Van Til about this, I began with these words: “As someone who does not see Karl Barth as a real Christian, what—” Van Til cut me off sharply right there. In an excited voice he said, “No! No! I have never said Barth is not a Christian. Never! What I have said is that his theology is not genuinely Christian. If all that a person knew about the gospel is what they learned from his theology, they could not come to Christ!”

Van Til was saying something here that is simple and straightforward:

A person can have what we see as a highly defective theology, and yet we can still acknowledge that the person’s heart has been transformed by the power of the gospel of Jesus Christ.

Barth, from Van Til’s perspective, was setting forth a theological system that fell far short of biblical fidelity. But that did not mean he was not a genuine Christian. Hodge was making the same point about Schleiermacher: Bad theology, he said, but we can tell from the hymns that he sang that he longed to be with his Savior in heaven. And Catholicism in Bavinck’s portrayal: Righteousness by good works? Not a doctrinal formulation that a good Calvinist can live with. But in spite of that, some folks who believe that kind of thing clearly exhibit a “complete surrender and … fervent love for God.”

Excerpted from Adventures in Evangelical Civility by Richard J. Mouw. Used by permission of Brazos Press, a division of Baker Publishing Group, ©2017. BakerPublishingGroup.com