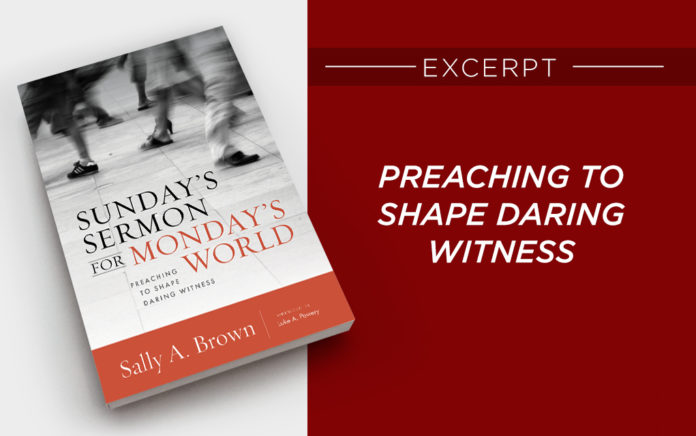 Excerpted FromSunday’s Sermon for Monday’s WorldBy Sally Brown One visionary, creative action by one person can reverberate around the world. On a Thursday evening, December 1, 1955, Rosa Parks—an African American employee in a department store, weary after another workday on her feet, and weary as well of America’s racist double standards—refused to comply with […]

One visionary, creative action by one person can reverberate around the world.

On a Thursday evening, December 1, 1955, Rosa Parks—an African American employee in a department store, weary after another workday on her feet, and weary as well of America’s racist double standards—refused to comply with the bus driver’s request that she give up her seat in the “colored only” section to a white passenger who had been left standing when the last open seat in the white section was filled.

On June 5, 1989, when a column of tanks rolled into Beijing’s Tiananmen Square, part of ongoing military action designed to crush a student-led political uprising, an unknown young man took a stand directly in the path of the first tank, shifting his stance each time it tried to maneuver around him.

In May of 1992, after a shell killed 22 innocent citizens in a square near his home in Sarajevo, professional musician Vedran Smailovic played his cello for twenty-two days at the site of their deaths. In subsequent weeks and months, Smailovic continued to play, day after day, at sites where shelling, bombs, and sniper fire were taking lives, often choosing to play amid the shambles of once beautiful buildings bombed into rubble.

Malala Yousafzai was a Pakistani teenager when she began fighting against government threats in her home country of Pakistan to end education for young women. Taliban extremists took over her school bus and attempted to end her life with a bullet to the head when she was 15; but Malala survived. In 2014, at age 17, she became the youngest winner of the Nobel Peace Prize. She returned to her home country of Pakistan for the first time on March 29, 2018, where education for girls is again universal today.

Many around the world remember the name Rosa Parks. Most adults recall “the cellist of Sarajevo,” although very few know his name. At the time of this writing, the “Tank Man” of Tiananmen Square has yet to be conclusively identified. Malala Yousafzai’s fight for girls’ education around the globe continues.

From Outreach Magazine  Leading Major Change in Your Ministry

Lodged in our memories are the images of these creative, courageous witnesses, daring to signify with their bodily presence in contested spaces their belief in powers of justice and hope that cannot be defeated by those who aim to win by force. An African American woman seated resolutely on a city bus; a cellist absorbed in his music amid destroyed buildings; a slight, lone figure silhouetted before a tank; a young Pakistani woman with bandaged head turned toward the camera, smiling as best she can: These women and men chose to act as “agents of [redemptive] interruption.”

While only one of the four identifies Christian faith with the choices made, each of these memorable persons chose to act with ingenuity, vision and purpose amid situations fraught with tension. In doing so, they risked their futures—even their lives.

A half century or more from now, the early 21st century may be lodged in memory as that period in which terrorist tactics became established, domestically and internationally, as a staple of the daily news. In the United States, as elsewhere in the world, reports of acts of terroristic violence are as common an item on the evening newscast as erratic shifts in the price of oil—so common, in fact, that the stock market reacts more sharply, by far, to the latter than to the former. This winter and spring, so many school shootings have taken place that, in the course of table conversation in the cafeteria, I found myself having to ask the person next to me, “Excuse me, which school shooting are we talking about right now?”

In the United States, how safe you are walking down your own street depends, in part, on the color of your skin. In countries around the world, minority ethnic or religious populations are targeted for systematic harassment, deportation, or elimination. Western or “westernized” sociocultural spaces in the 21st century are characterized, increasingly, by polarized politics, huge disparities between the well-to-do and the just-getting-by, and a plethora of cultural-linguistic and religious diversities. These social vectors run straight through nearly all the everyday spaces where the people we preach to earn their living and raise their children, learn and socialize, shop and vote.

Under conditions like these, it takes energy to stay socially and politically engaged. The temptation to retreat into homogenous social enclaves along class, ethnic or religious lines, or to take refuge in social media “echo chambers” where the disturbance of difference is filtered out, is ever present. Christians are as tempted as anyone else to take refuge in such artificially homogenous spaces. But can we do so with integrity, in precisely that historical moment when public testimony to the mercy, inclusive love and restorative justice of God—in deed as well as in word—could not be more crucial?

What kind of public witness to God’s ongoing, redemptive engagement with the world is called for under the conditions described here? What kind of daring, everyday counter-testimonies to the all-too-easy rhetoric of hate might strategic preaching on our part inspire? In other words, how can individual believers discern and, with imaginative courage, participate in the ongoing, redemptive activity of God in the ordinary settings of their everyday lives, testifying with their lives to the mercy, love, and justice of God?

These questions about public Christian witness in our time raise in turn, homiletical questions. Precisely what strategies in Christian sermons best equip the men, women, and even children in our pews to take daring action that testifies to the radical mercy, inclusive love, and restorative justice of God, doing so in ways that are creative, agile, and apt to the demands of a given moment? How can we who preach inspire the “ordinary prophets” of our time—those who, in Christ’s name, will act in great or small ways as agents of (redemptive) interruption?