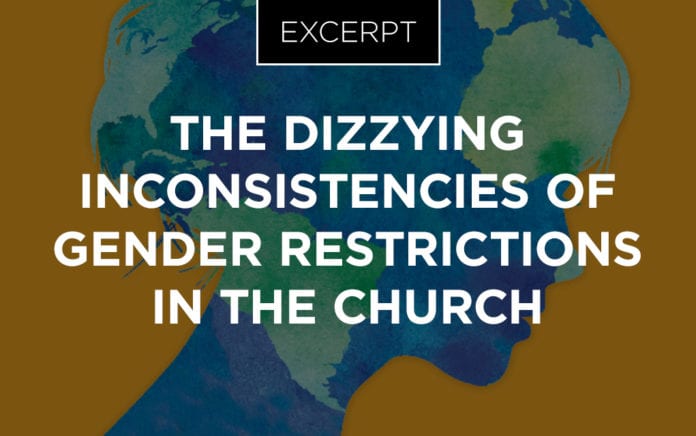 Women have reported a leadership landscape of rules regulations constantly shifting beneath their feet.

Excerpted From
Women in God’s Mission
By Mary T. Lederleitner

The following points are some of the situations and scenarios that discourage the women in this research. These things have weighed on their hearts, and they wished situations like this never happened or were far less common.

Experiences outside the workplace. In their personal life some of the women mentioned being physically abused by men at different times in their lives. Others spoke of years of psychological torment and taunting. Others experienced sexual abuse. This isn’t surprising given that abuse against women is so common around the world. As Ellie very appropriately said after reflecting on what she had experienced, “Terrible things happen, but those are not God things. It is not God’s heart for a woman to be abused.” I wholly agree. There is simply no excuse, ever, for abuse. It never models God’s heart for his daughters.

In addition to these issues, women also mentioned the challenge of carrying the larger share of the load whenever a family crisis or emergency arises. They are often the primary person caring for a sick child, a sick parent or a struggling relative.

Experiences in the workplace. In their professional lives and workplaces, women leaders mentioned a variety of discouraging scenarios. The following were mentioned most frequently.

Compensation. Many talked about extreme financial disparities in their pay, simply because they were women. This often occurred regardless of the level of professionalism they exemplified in the workplace or the outcomes they were seeing through their leadership.

Promotions. Megan explained how frustrated she was with the double standards used when people are considered for promotions. For example, she said if a “guy has soft skills such as good relational competencies, he is considered to be an ‘extraordinary leader.’ But if women bring these same ‘extraordinary qualities’ to the table, it is merely expected because of their gender.”

Invisibility. Being treated like you are invisible can be incredibly hurtful, especially when women have served faithfully and worked so hard to be excellent leaders.

Patricia spoke of being in a senior executive role where a male colleague would not copy her on emails, even though they pertained to her. He wrote only to her subordinate, who is male, and that male subordinate told her what her colleague, who is her organizational peer, said. Others were always passed over for being mentored exclusively because of their gender. Therefore men around them would experience significant leaps in their development as leaders while women were invisible on the sidelines, never having what they needed to fully develop to their potential. Others spoke of how their ideas were stolen and used by men to get promotions or recognition.

Proving themselves. An overwhelming theme in many women’s comments was feeling like they relentlessly had to keep proving themselves over and over again. Several said they were tired that they had to keep doing this because of their gender. If they were the first women in leadership roles in organizations, the pressure was even greater. I understand these comments because I have felt the same weight over the years. Women in leadership often have to perform far better than men to be assessed or evaluated as equal to or as good as male peers.

From Outreach Magazine  Pastorpedia: Ministering to People on the Fringes

Until I did this research, I don’t think I absorbed how dizzying, wholly inconsistent and often illogical all of the gender restrictions are for women in different churches and ministries. For example, within this relatively small sample, women from the same denomination often experienced different restrictions. Within one denomination some could preach, but they could not preside over the Eucharist.

Others could not preach or lead in any way if a man was present, and others could perform all clergy responsibilities, including being the equivalent of a senior or sole pastor at a church. In some seminaries women could lead as professors and be integrally involved in the pastoral-formation process for men, but they might not be permitted to lead a simple mix-gendered Bible class or small group at their local congregation. In another seminary a woman could have planted a large number of thriving churches, but later in life when she came to seminary she would be told, “It’s like Deborah’s time. You can’t be doing that. There are now men to do that.”

Some are told they can “share,” but they can never “preach.” Others can talk in front of the podium but never behind the podium. Others can perform an extensive spectrum of ministerial functions, as long as it is done under the rubric of being “the pastor’s wife.” In those situations, as long as what she is doing is not documented in a job description and she is not being paid, it is permissible. In some instances women can be evangelists and prophets, but they might not be permitted to preach. I’m still not sure what that difference is, because what they tend to say in each role seems to be the same. Some are allowed to baptize new converts to the faith. Others are told they can never baptize, because that is a man’s role. In some churches women can be involved in public prayers, read passages of Scripture, take offerings, assist with Communion, and the like, but in other congregations only men are allowed to do those things.

From Outreach Magazine  3 Biblical Tips for Beating a Depression Dip

It varies as well in nonprofit ministries. Nicole, the young African leader just referenced, told me that in one country in Africa the executive director, who is also a woman, is not permitted to lead prayer at a board meeting. However, when it is her turn to speak, this female executive director gives her report, and it is clear that she is deeply respected and runs the entire organization quite well.

Nicole said, “In our country in Kenya, women can pray in board meetings but there you can’t.” Women serving as executive directors for ministries that work with a broad spectrum of denominations and churches have their work cut out for them trying to discern what is permissible and what is not because of their gender.

Often what women can and cannot do in ministry leadership roles fluctuates tremendously, changing significantly among churches within the same denomination and even between churches in the same city. In other instances it fluctuates and can change radically within a single congregation or ministry, depending on who the next senior pastor or executive director might be. For these reasons many women regularly experience the landscape shaking under their feet, wondering at any given time if what they can or cannot do will now be prohibited, encouraged, marginalized or no longer funded.

However, what struck me the most with these women was how gracefully they dealt with the various gender obstacles they were facing. While some were still struggling with feelings of anger and frustration, which is legitimate given what they had experienced, the overwhelming majority found a way forward by implementing a variety of strategies they believed were serving them well.