Home Resources Books Why Study Moral Leaders From the Past? 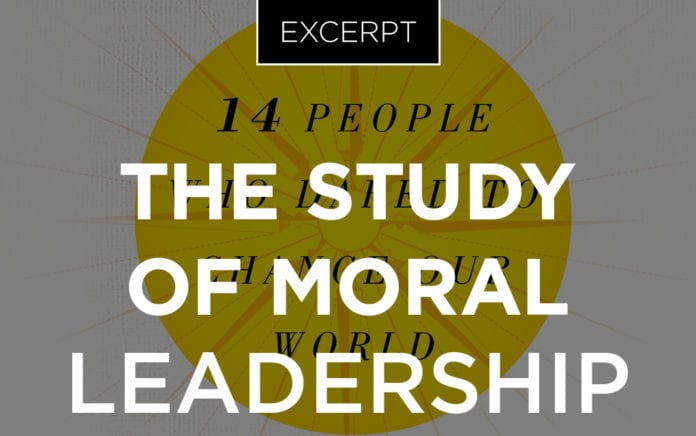 Studying the lives of moral leaders from the past can strengthen our ability to discern moral leadership in our own lives.

In early January 1920, twelve men sat in jail, condemned to die. A few months before, they and other poor black tenant farmers from Elaine, Arkansas, had met at a local church to organize against the outrageously low prices for cotton the white owners of their land insisted upon. The farmers posted armed guards outside for fear of retaliation. As they assembled that night, there was a rapid burst of gunshots. No one knows who fired first, but a local white man lay dead in the aftermath.

The horrific backlash arrived the next day. In one of the bloodier events in US history, gangs of furious whites, stoked by false rumors of unprovoked murder and an impending black uprising, burned the church to the ground, confiscated property, and attacked, beat, arrested and murdered scores of people. In the aftermath, dozens of sharecroppers faced time in prison. A jury sentenced 12 of them—accused of murder despite scant evidence—to die in the electric chair after only six minutes of deliberation.

Soon, word reached Ida B. Wells-Barnett, the famous journalist and activist who had spent decades investigating injustices like these in the racist Jim Crow South. She traveled to Arkansas and snuck into the jail where the men were held. For two hours, she recorded their testimony.

Then she stood up and spoke:

“I have been listening to you for nearly two hours. You have talked and sung and prayed about dying, and forgiving your enemies, and of feeling sure you are going to be received in the New Jerusalem. … But why don’t you pray to live and ask to be freed? Let all your songs and prayers hereafter be songs of faith and hope that God will set you free. Quit talking about dying; if you believe your God is all powerful, believe he is powerful enough to open these prison doors, and say so. … Pray to live and believe you are going to get out.”

In the wake of her visit, Wells-Barnett published a pamphlet,“The Arkansas Race Riot,” detailing the outrage. Lawyers from the National Association for the Advancement of Colored People (NAACP), which she had helped found, took up the cause. Those 12 men had been certain they were going to die until Wells-Barnett told them to pray to God that they might live. They did their part, and Wells-Barnett did hers. By 1925 every one of them had been freed.

Stories like this are unforgettable, and their leading characters stay in our minds long after the details have faded. Of all the billions of people who have lived on our planet, there are certain individuals we cannot forget.

A certain quality about them grasps us, enthralls us and refuses to let us go. This is a book about those individuals. It is a book about great moral leaders—people who did not just accrue fantastic wealth, power or fame but in some way left the world a better place. We measure their impact not by military victories or economic advances, technological leaps or sprawling empires, but by whether they left a more just and moral society.

They are not just historical figures of note but great leaders who offer moral insight to us today.

Others were admired in the moment, but revelations since have exposed their failings. As you read further, you should ask whether it is possible to be a moral leader without attracting controversy.

You will also be forced to discern your own level of admiration for certain leaders. Our society today veers wildly between extremes in its treatment of famous figures. At times, we deny the fallibility of our heroes in order to protect their reputations. In other cases, we quickly cross names off our list of exemplary individuals when we stumble across any failing at all. In this volume, we hope to stand astride that gulf. We have made certain decisions about whom to include. You will have to make some too.

You may come to believe that some of these leaders have no place in this book, and others were unconscionably excluded. That is okay. The point of this book is not to insist on a single authoritative list of moral leaders.

From Outreach Magazine  Why Millennials Don't Care About Heaven

Our hope, instead, is that this book deepens your understanding of moral leadership and strengthens your ability to discern it.

The moral leaders you will encounter in these pages are just a small sample of those that have graced human history. One of us (Gushee) has for more than twenty years taught a course on models of moral leadership at Union University in Tennessee and Mercer University in Georgia.

The leaders included in that course syllabus form the core of this book.

The core group included here has proven to be a solid foundation for a semester-long study of moral leadership. Nevertheless, the roster of leaders included is imperfect and too short. It is our hope that this text will be the beginning of a longer conversation about moral leadership.

Both authors of this book are Christians, but this book does not include only Christians, nor is it intended only for Christian readers. Both of us are captivated by the question of how to live a life of meaning—a question that we answer, in part, through following Jesus Christ. Our shared faith does influence the approach we take in this book. For instance, our conviction that human beings are created in the image of God, and yet none are without sin, forces us to consider both the strengths and weaknesses of people with equal seriousness.

Moral leadership is fascinating precisely because it is not the exclusive province of any one religion or, indeed, of religion at all. There is something in the human spirit that simply cannot help but gravitate to people who have led lives of great moral purpose. Moral leaders can serve as a bridge across the tribal chasms that divide us today. They can also provide a center of gravity, reminding us of what transcendent morality looks like at a time when ethical relativism and anything-goes culture prevail. Our shared admiration for moral leaders can be the starting point of respectful dialogues between Protestants and Catholics, Muslims and Jews, Christians and Hindus, believers and secular humanists, and everyone in between.