Home Resources Books How God Preaches to Us—and Through Us 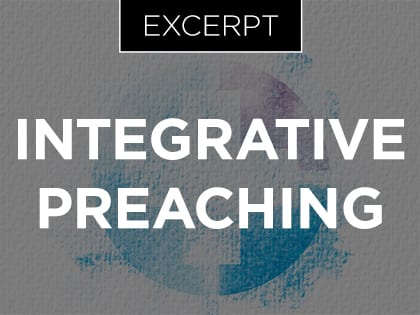 When a preacher speaks, God is the one who is speaking. Therefore the preacher has the dual privilege of preaching and listening.

Preaching is a particularly confident way of speaking. When a football coach says that he is “preaching defense” to his team, he is speaking in an especially authoritative mode, welcome on the practice field, though less so elsewhere.

A player’s job depends on the pleasure of his coach. His is not to question why. His is to defend or die. The player must presume the coach’s authority if he wants to keep his job. Coaches can preach. Others might better hold their tongue.

The places where we welcome preaching are few and seldom. A parent, perhaps, could preach to a child until a certain age. A deeply trusted friend could adopt the role of preacher, though perhaps in sparing measure. A pastor preaches as the function of his or her calling, which is a complicated matter.

There was a time when preaching was in vogue—when people were willing to grant authority to the man of the cloth who spoke for God among the people. There was a time when people were comfortable submitting to authority. That time is not today. No one is going to grant you privilege because you are a preacher. No social or financial benefit is going to come your way. You may have to pay relational capital instead of gaining it. To read this book and put its principles into practice might require of you a kind of courage.

The day when preaching brought a sense of cultural privilege is long past. In fact, many will see preaching as unwelcome, and sometimes even rude. Polite society agrees that we must not speak of things that demand or divide.

Preaching is just too confident—arrogant even. Our subject too threatening. Our conclusions too demanding. Friends don’t let friends attend to sermons. And yet here we are, you and I, sharing thoughts around this theme of preaching. The Bible is clear, and our calling is unshaken. We must preach the Word, despite the constant opposition we will have to deal with. We remember that Paul told Timothy to expect a time when people would not put up with what we have to say—that they would turn their heads instead to those whose words would soothe the itching of their ears. We understand that this is the way of things, and we would not expect it to be any different.

There are those who have an ear for this. We understand that preachers travel narrow roads, but we understand that those pathways lead to special places. We believe we preach in the presence of God and of Christ Jesus and that we will be accountable for what we have to say. If we can keep our head and do the work of our callings, we will find that there are those God has especially prepared to respond to what we have to say—to what he has to say.

And so we preach, when it seems to be in season and when it seems to be out of season, when we find it convenient and when we find it inconvenient, when we are fairly sure they want to hear what we have to say and when we are quite sure they don’t. We preach because we have been called to it—because we could do no other. We preach for those who will find Jesus, and we preach the accountability of those who won’t. We preach because someone has to, because there is a harvest to be reaped, and because we just love to speak of Jesus.

WE PREACH BECAUSE GOD SPEAKS

Is there anything better than that God has spoken? And not just that he has spoken, but also that he speaks? Set aside any doubts or postmodern uncertainties, if only for the moment. Imagine that the God of the universe, who spoke the world into being, is not disinterested in his creation. Imagine that this God is invested in the outcome. Consider the idea that this God is actively engaged, sustaining things and speaking things. Imagine that the God who built you from dirt has a purpose for you forever and that he has something to say to you. Would you not want to listen?

From Outreach Magazine  Just Because You Can Develop a New Competency, Should You?

God spoke in his initiation of creation, establishing the world and its direction by the power of his Word. He spoke in the incarnation of Christ, who showed God to us, offering his mind and ultimately setting the terms and paving the way for our salvation. He spoke through his inspired Word, the record of his will and of his way. And now he speaks through the convergence of these means and by the illumination of his Spirit. Whenever we stand to preach, we bring this all together. As we speak in the presence of God, of the person of Christ, through the purpose of Scripture, in the power of the Spirit, the kingdom comes and is populated by those prepared to hear—if we are prepared to preach.

Some of us know this too truly—our not-enough-ness. It is dispiriting to give yourself to something when you know that you will never be enough. Our vision for our preaching can fade. Our confidence in the effectiveness of our preaching can settle into a weekly incrementalism that you have to trust by faith because it is hard to see the fruit on any given Sunday. This can happen when we forget what God is doing and who it is who speaks.

GOD IS THE PREACHER OF HIS WORD

We have come to something key—something that will render everything else this book offers as useless if we cannot apprehend it. Let me put it as a question: Who is the preacher, anyway?

“Well, I am,” we stammer uncertainly, sensing a trick to the question. “I am the one standing here in front of the crowd. I am the one they’re going to talk about if I fail to feed them in the manner to which they are accustomed. I am the vulnerable one. I am the one responsible.”

And about that you are correct. But I would press the question further. Who is it who speaks, and who is it who listens? Who has the words of everlasting life? Whose words have the power to transform?

God is the preacher. It is the self-revealing God who brings us words of truth and life. It is God to whom we ought to give attention. It is he who offers hope and healing. God preaches, and that is both wonder and comfort to the beleaguered human who has felt the weekly burden as if it was his or her own.

It is this theological foundation that gives hope to our preaching. The doctrine of revelation—this appreciation that the Creator spoke and speaks—is the thing that animates our preaching. As humans we can see ourselves as conduits or culverts—channeling the flow of God’s communication.

WE ARE LISTENERS TO THE SERMON THAT GOD PREACHES

And yet we are something more than that. This metaphor of culverts, giant concrete channels, is uninspiring—belittling even to the privilege that is ours as human preachers. We are more than channels, more than heralds, more than ambassadors, more than facilitators of God’s message, though we are all that, yet more. We are listeners—first listeners—and there is glory in it.

God does not speak into a void. This is a communication process that requires both sender and receiver. Without reception there is no preaching. Without a listener, preaching is an incomplete pass. The tree that falls in the forest makes no sound until there is an ear to hear it. The glory of preaching is not only in the speaking of it, but in the hearing also. The hearing is the human part.

There is great dignity in this. That God speaks and we can hear him bestows a special privilege. Craig Brian Larson has said that in preaching “gravity reverses,” and that nothing offers greater dignity than the preaching and the hearing of a sermon.

Human preachers have a special place within this process. Preachers are less communicators than they are listeners—special listeners, first listeners, with the advantage of a head start. We get there first, ahead of the crowd, and know the joy of first discovery. We engage the text, seeking the Spirit, and we hear! We hear the voice of God, who speaks to us his grace and truth.

Then having heard, we take what we have heard and offer it to others. God comes with us as we do. God keeps speaking by his Word and by his Spirit, in a Trinitarian expression of his intention for the world and life and us. We speak, certainly in that we give voice to language, but it is not our language. It is his Word that we heard first and now help others, that they might also hear.

PREACHING AS AN ACT OF LEADERSHIP

Preaching is an act of leadership, like the time I led a group of guys to the top of Black Tusk. I had been to the mountain before, and I had seen the beauty of its vistas. I loved these young men, and I wanted for them to know the same exhilaration that I had first felt when I scaled the summit. So I took them there and gave them the advantage of my experience. Because I had seen, I could help them to see. Some of them, no doubt, would grow to see even further than I, which is a tremendous thing.

Hearing is also an awesome thing. The human preacher hears and then leads others to hear. We lead in listening, which is the best, certainly the most condensed expression of human preaching that I know. Preaching is leading in listening—listening to the voice of God and helping others do the same. The assumption is that when we have done so, things change—seen and unseen. Nothing can remain the same when we have heard from God. Believe that with all the faith you have.

These are not just empty words, as if words ever lack substance. Speech matters. It is not for nothing that God spoke the world into being. It is not accidental that the Son of God is described as “living Word.” Words have implications, and the Word of God carries consequence forever. When we get this, we will open our mouths and speak with the humbled confidence that leads others to listen to the words that change the world. This is what it is to preach.