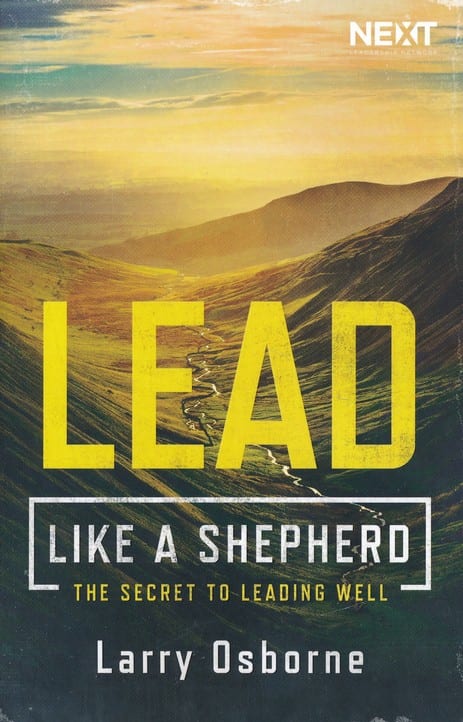 Lead Like a Shepherd
The Secret to Leading Well
(Thomas Nelson, 2018)

WHO: Larry Osborne, one of the senior pastors at North Coast Church in Vista, California.

HE SAYS: “A shepherd has a unique leadership style. He doesn’t drive his sheep like a cowboy. He doesn’t seek to establish himself as an alpha dog, like a trainer, or treat his people as assets to be managed. That’s not to say a shepherd doesn’t provide strong leadership. He does. A shepherd doesn’t ask the sheep where they want to go; he leads them fearlessly, confidently, and boldly to where they need to go.”

THE BIG IDEA: In 1 Peter 5:1-4, leaders are exhorted to shepherd their flock. Osborne presents numerous parallels between today’s leaders and shepherds of yesteryear, looking at the kind of leaders and leadership values that produce disciples rather than merely bigger churches.

THE PROGRESSION:
Part 1, “Spiritual Leadership,” examines the principles of leadership from a shepherd’s perspective, that the mantel of leadership doesn’t only reside at the top levels of the church.
“Think Like a Shepherd” is the theme of Part 2, which shows that everything is about the sheep. Larry talks about adapting to weakness, fear, blind spots and stragglers.
Part 3, “Serve with Enthusiasm,” explains that just like there is “no crying in baseball,” there is a no-complaining rule in leadership. Part 4, “Lead by Example,” expounds on the simple principle that what we are is what we will get, while Part 5, “Take the Long View,” talks about the importance of patience.

A CONVERSATION WITH LARRY OSBORNE

What do you think is the most common misconception those involved in ministry have about leadership?

There are many, but one that always amazes me is the idea that shepherding the flock and leading the flock are two different things. I hear people say, “I’m a shepherd not a leader,” or “I’m a leader not a shepherd.” In the spiritual realm the two are inseparable. Two sides of the same coin.

At the end of the day, a shepherd who doesn’t lead brings no value to the flock and a leader who doesn’t shepherd uses the flock.

What should a pastor who feels burned out on leadership do to revive?

What advice would you give leaders who don’t fit the model of a shepherd but still want to lead?

Frankly, anyone who wants to lead without shepherding doesn’t understand biblical leadership. At the end of the day, spiritual leadership is all about serving those we lead so well that they become all that God has called them to be. Leaders that are unwilling or unable to slow down and care for the sheep (and help them overcome their fears and limitations) aren’t leaders. They are more like despots trying to build their own little kingdom.

The Future Is Now