Home Resources Books Walking in the Way of Jesus 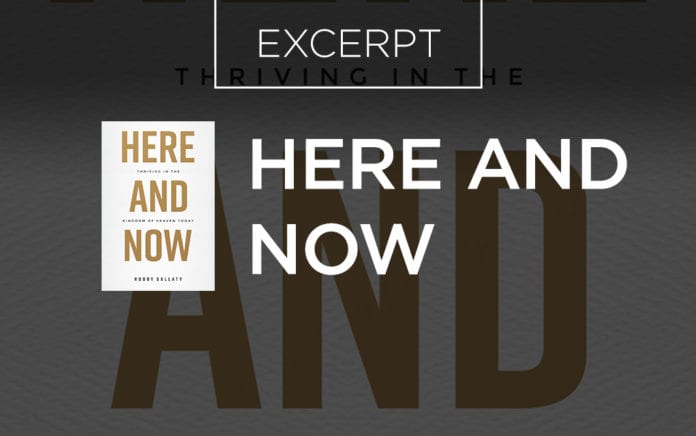 From revelation to redemption to relationship to responsibility

Excerpted From
Here and Now
By Robby Gallaty

Even though God is king over the world he created, his kingship is distinct among a people whom he redeemed. Agreement to the marriage covenant on Mt. Sinai was more than lip service. The people were expected to respond with loyalty by keeping God’s commandments through daily living, and by doing this, God’s kingdom agenda would advance throughout the world. The formula is as follows: God redeemed on Passover to reveal himself to them on Mt. Sinai in order to have a relationship with them through their responsibility to obey his commands.

This same paradigm is followed in the Gospel accounts with the calling of the 12 apostles. Jesus proved throughout his ministry that he was the Moses-like figure who would accomplish what Moses fell short of doing by leading the people not into the Promised Land, but into the kingdom of God. Many similarities can be made between the two: both were shepherds (Moses in his profession; Jesus in his ministry, see John 10:11), both led the people out of bondage; both were hidden in Egypt as children; both fasted for forty days; both selected twelve men; and both fed the people with bread in the wilderness.

It’s no wonder that when Jesus outlines what living looks like in his kingdom; he mimics Moses by ascending a mountain (Matt. 5:1). Notice what Jesus did immediately before sharing the Sermon on the Mount. He selected the twelve disciples, according to Mark 3 and Luke 6. They didn’t choose him; he chose them. As already seen, redemption precedes responsibility. Another way to say it is that grace from God precedes work for God. Jesus concludes the Sermon by stating the importance of obeying the words he just shared. Obedience to the commands of Christ is not legalism. “Legalism says, ‘I must obey God in order to be saved.’ Grace says, ‘I must obey because I am saved.’”

The same is true today. God saved us apart from any good deed we could offer. “All have sinned and fallen short of the glory of God,” Paul explained in Romans 3:23. He added in the book of Ephesians, “You were dead in trespasses and sins. … For you are saved by grace through faith, and this is not from yourselves; it is God’s gift—not from works, so that no one can boast” (Eph. 2:1, 8–9). Although God redeemed us by his gracious initiative, he expects us to live for him through obedience. Paul doesn’t end his thought with verse 9. He continues, “For we are his workmanship, created in Christ Jesus for good works, which God prepared ahead of time for us to do” (Eph. 2:10). We are not saved by good works, but we will do good works after being saved because of the relationship we have been brought into.

Paul’s language about the crossroads between life and death is not new. God presented the same offer for his people just entering this covenant relationship: “See, today I have set before you life and prosperity, death and adversity” (Deut. 30:15). How would the people live in prosperity under the kingship of God? He explains in the next verse, “For I am commanding you today to love the Lord your God, to walk in his ways, and to keep his commands, statutes, and ordinances, so that you may live and multiply, and the Lord your God may bless you in the land you are entering to possess” (Deut. 30:16).

Walking with God has always been his modus operandi. He walked with Adam, Enoch and Abraham. He enlisted Moses to lead the people on a 40-year walk, where he would journey alongside them. Joshua carried the baton into the Promised Land by treading through town after town declaring God’s rule and reign. Jesus used the walking motif in the New Testament when he summoned his future disciples to follow him or “walk after me” (Matt. 4:19). When Thomas questioned him about following him to the place he is preparing in heaven, Jesus didn’t point him to a path, like every other religious figure in history, by saying, “This is the way.” He said, “I am the way.”

Early Christians in the book of Acts were referred to as “the Way,” as revealed in Acts: “But Saul, still breathing threats and murder against the disciples of the Lord, went to the high priest and asked him for letters to the synagogues at Damascus, so that if he found any belonging to the Way, men or women, he might bring them bound to Jerusalem” (9:1–2), and Acts 19, “But when some became stubborn and continued in unbelief, speaking evil of the Way before the congregation, he withdrew from them and took the disciples with him, reasoning daily in the hall of Tyrannus” (19:9). The Way describes someone who acknowledges God as king and submits to his rule over his or her life by walking after him.