Home Resources Books Why Purity Is Not a Private Matter 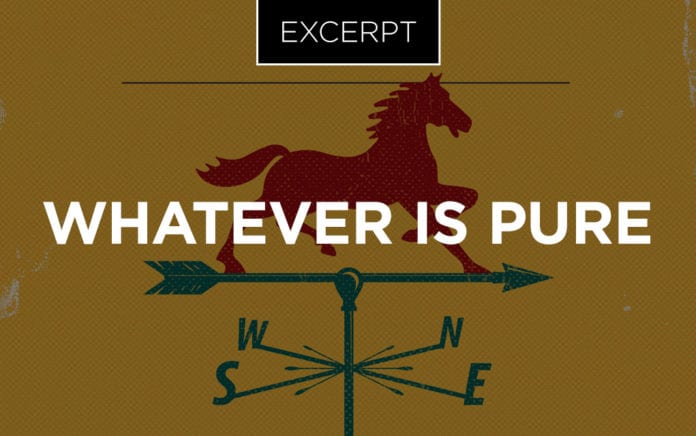 Ultimately, compromising our purity and integrity reveals a sinful heart with broader implications.

Excerpted From
All That’s Good
By Hannah Anderson

After calling us to seek whatever is true, honorable and just, Philippians 4:8 draws our attention to “whatever is pure.” Of all the virtues listed here, purity may be the most familiar to us, at least in terms of how it leads to goodness. In the wake of the Sexual Revolution, the church has devoted untold time, money and energy arguing for the goodness of sexual purity and traditional sexual ethics. We have debated gender roles, sexual identity and the definition of marriage. We have promoted abstinence, taken purity pledges, adopted the “Billy Graham Rule” and loudly and legitimately argued that what happens in the privacy of the bedroom has public significance.

But in recent days, this seems to be changing. A 2016 survey conducted by the Public Religion Research Institute revealed that an overwhelming majority of white evangelicals now see less connection between private morality and the common good. While only 61 percent of the general public believes that “an elected official who commits an immoral act in their private life can still behave ethically and fulfill their duties in their public and professional lives,” 72 percent of white evangelicals do—a shocking 42-point jump since 2011. Pundits have offered many explanations for the shift, but regardless of what caused it, those who once spoke most strongly for the wisdom of purity are now shrugging their shoulders.

Part of the problem may be that, while we have argued for traditional sexual ethics, we haven’t always understood how Scripture derives those ethics from a larger understanding of purity. We’ve learned the rules, but we don’t necessarily understand the logic behind them. We don’t really understand how faithfulness in our intimate lives predicts and even leads to flourishing in our larger lives. Interestingly, the Scripture uses the image of a fire to explain how purity and goodness go hand in hand.

Speaking to the priests of the nation of Israel, Malachi prophesies that the Lord was coming as a refiner’s fire to “purify the sons of Levi and refine them like gold and silver” (3:3).

This image comes from the ancient art of metallurgy, including the technique of heating ore to a point where the impurities separate from the essential metal. As a result, metal is considered “pure” when it is uncontaminated, when it is the same substance throughout and unmixed with anything else. That’s why, in common usage, the word pure can describe everything from gold to essential oils to water. Being pure is the condition of being whole and untainted.

When Malachi tells the priests about the Lord’s coming, they push back, demanding that he explain why the Lord is angry with them. “Because,” Malachi responds, “even though the Lord has been a witness between you and the wife of your youth, you have acted treacherously against her. She was your marriage partner and your wife by covenant” (2:14).

The Lord was coming to purify the priests of their infidelity. They had made promises to their wives and failed to keep them. They had said one thing with their mouths and done something different with their bodies. They were not whole. But the priests’ adultery was symptomatic of a larger duplicity. They had also been unfaithful to their callings as priests. “The lips of a priest should guard knowledge …” Malachi tells them. But, “You, on the other hand, have turned from the way. You have caused many to stumble by your instruction” (2:7–8).

The priests’ unfaithfulness to both their wives and their work revealed them to be unfaithful men to the core. In this sense, their adultery did not make them impure; they committed adultery because they were already impure. They had divided hearts.

This nuance helps us understand why Scripture uses sexual ethics as shorthand for a larger life of purity and faithfulness. The danger of immorality is not simply that we have crossed physical lines. The choices we make sexually reveal our heart’s posture toward God and each other. Are we so divided that we will take all the privileges of sex without the responsibilities of commitment? Are we so defiled that we will love ourselves first and foremost in the very act of lovemaking?

This is why the covenant promises of marriage are foundational to Christian morality. The promises we make to each other are the basis on which we call each other to love and self-sacrifice. And whether we fulfill our promises to those closest to us predicts whether we will fulfill our promises to the broader community. A man who cheats on his wife will cheat those under his care elsewhere. A woman who cheats on her husband will cheat her customers in the marketplace. And a priest or pastor who is unfaithful to his marriage vows will be unfaithful to his ordination vows.

Ultimately, Malachi tells the priests the root of their unfaithfulness is their fractured hearts: “You ask, ‘How have we wearied [the Lord]?’ When you say, ‘Everyone who does what is evil is good in the Lord’s sight, and he is delighted with them’” (2:17). In other words, the priest’s adultery was symptomatic of how their entire moral framework had already been turned upside down; they lacked the wisdom and integrity to call good “good” and evil “evil.” And when this happens, you can justify just about any form of impurity.

Excerpted from All That’s Good: Recovering the Lost Art of Discernment by Hannah Anderson (©2018). Published by Moody Publishers. Used by permission.