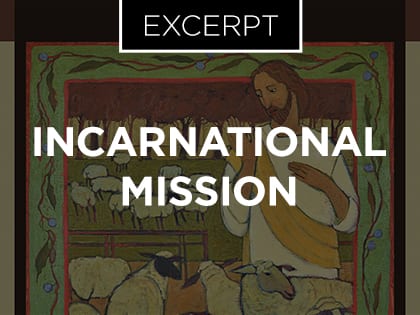 There are many reasons why people leave the fellowship of the believers, but we must practice presence to welcome them back.

BEING WITH THE LAPSED

The key difference between being with the church (incarnational ministry) and being with the world (incarnational mission) is that in the church one can assume that ministry is recognized and discipleship sought, whereas in the world one can make neither assumption. This constitutes a huge difference of approach, understanding, and purpose. Thus there are some people who have made profound, and sometimes public, mistakes or have fallen into damaging or deceitful patterns of behavior, yet still long to be whole and look to the church and its representatives to help them “come to themselves” like the prodigal son. I call them the troubled, and I consider being with them in my book Incarnational Ministry. By contrast, others may have made no particular step away from the church’s lifestyle norms and yet have allowed a distance to grow up between themselves and the fellowship of faith, having in the process lost respect for the authority and ceased to seek the guidance of the church’s representatives. I call these persons the lapsed, and I consider being with them to be a form of mission.

Of all the titles Jesus adopts and descriptions Jesus accepts, perhaps the most resonant is that of the Good Shepherd. John 10:1–16 suggests a number of things about Jesus as a good shepherd. He enters by the gate of the sheepfold, in contrast to the thief and the bandit. He calls his own sheep by name and the sheep follow him because they know his voice. He comes so that the sheep may have life and have it abundantly. He lays down his life for the sheep, in contrast to the hired hand, who runs away. He has other sheep that do not belong to this fold whom he must bring also, that they may listen to his voice, so that there will be one flock, one shepherd. This sets out a wide-ranging agenda for incarnational mission. But the image of Jesus as shepherd is associated above all with Luke’s parable (15:4–7):

“Which one of you, having a hundred sheep and losing one of them, does not leave the ninety-nine in the wilderness and go after the one that is lost until he finds it? When he has found it, he lays it on his shoulders and rejoices. And when he comes home, he calls together his friends and neighbors, saying to them, “Rejoice with me, for I have found my sheep that was lost.” Just so, I tell you, there will be more joy in heaven over one sinner who repents than over ninety-nine righteous persons who need no repentance.”

This parable (though it does not actually use the word “shepherd”), together with the resonances of John 10 and Psalm 23, has lodged a fundamental, perhaps definitive image of mission in the church’s mind: that of the Good Shepherd who goes out at considerable risk, in possible neglect of the regular flock, and out of love for the lost sheep, into the wilderness and searches until it is found—and whose greatest joy, above all other joys, is to restore, rehabilitate and reintegrate the once-lost sheep into the flock, now and forever, in the spirit of the prodigal’s father (“this brother of yours was dead and has come to life; he was lost and has been found,” Luke 15:32). Hence being with the lapsed starts from glory—the glory of the joy in heaven over the restoration of the lost. The vital point about starting with glory is that being with the lapsed is first about recognizing and acting upon the grief and impoverishment of the flock and the angels in heaven over the absence of one irreplaceable sheep—and only secondarily about that lost sheep’s isolation and need to be found. It’s not a patronizing, judgmental and self-centered statement that no one can flourish outside the fellowship of faith; it’s a humble acknowledgment that the body of Christ is in pain and is not all it could be if a finger is missing.

Thus in drawing together John’s and Luke’s accounts of Jesus as shepherd we can delineate three strands: (1) ministry to the flock—knowing by name, leading, giving abundant life, laying down his life; (2) mission beyond the flock, seeking sheep “that do not belong to this fold” so that one day there will be one flock, one shepherd; and (3) mission to those who were once of the flock, but who have “like sheep . . . gone astray; . . . all turned to [their] own way” (Isa. 53:6) or, in the words of the 1662 Prayer Book, “have wandered and strayed from [God’s] ways like lost sheep [and] have followed too much the devices and desires of [their] own hearts.” Perhaps the most neglected of these strands is the third; but this third group, those who were once of the flock but have now wandered away—or been left behind, antagonized or rejected—could be the most revealing of the three.

One pastor went to see a woman of more senior years. She’d grown up in Wales. She’d left the church when she was a young woman. Ah, thought the pastor, this is a familiar story. A young person is raised in the church, but when they become a young adult either it turns out the faith hasn’t taken deep root or they decide to get outside and smell a different air for a while. But clearly, now that she was over ninety, she thought it was time to give the church a second chance. Took her time, the pastor thought, but, fair enough, the church has been patiently waiting for you all this while, like the father did for the prodigal son. Curiosity led the pastor to take a slight risk. “May I ask what it was that led to you being away from the church for 75 years?” Nothing to lose, the pastor thought; may learn something. But the pastor forgot the first rule of the inquirer: never ask a question to which you might get an answer you’re not ready to hear. The pastor was in for a shock; a shock that would leave a lasting effect on a whole ministry.

“It was when we wanted to get married. We were in love. The rector wouldn’t marry us.” Well, this sounds romantic, the pastor thought, and, always a soft touch for the romantic twist on a story, blundered in where angels fear to tread. “So was there something wrong,” the pastor wondered, “was your husband previously married, or were you too young, maybe?”

“No,” she said calmly, trying hard not to be patronizing or angry. “The rector looked at my hand. You see, I worked in a mill. I had an accident when I was sixteen.” She gently, undemonstratively, held up her left hand. The last three fingers were missing. “The minister said that, since I didn’t have a finger to put the wedding ring on, he couldn’t marry us.”

The color drained from the pastor’s face, and the pastor reacted with the disbelieving half-laugh one coughs out when one hears something so ridiculous that it just has to be funny, but in fact isn’t funny at all but deeply, deeply horrifying. It was so absurd that no one could make it up. It had to be true. Quickly the pastor felt that 75 years away from the church was pretty lenient. “And dare I ask what brings you back to the church now?” the pastor said, having learned nothing, but feeling a desperate need to hear her answer. “God’s bigger than the church,” she replied. “I’ll be dead soon. The Lord’s Prayer says forgive if you want to be forgiven. So in the end that’s what I’ve decided to do.”

“The fault, dear Brutus, is not in our stars / But in ourselves, that we are underlings.”

When Jesus portrays himself as the Good Shepherd, there can be no explanation for a sheep’s becoming lost other than the sheep’s own misadventure, folly, ignorance or perversity. But when the church sees itself as the Good Shepherd, it’s likely the reality is very different. The church tends to see the lapsed as those who have thrown away a precious gift out of their own irrationality. But this shows how a too-quick identification of the church with the Good Shepherd can prevent the church’s representatives from seeing what the lost sheep represents. That Welsh millworker suggests a different narrative. She hints at a story in which the lapsed are those who await the opportunity to save the church. After 75 years, she gives the church another chance. The question is whether the church is ready to seize that chance the second time around.

Whereas with ministry, presence is largely unproblematic—taken for granted, sought, longed-for, requested—with mission, presence is invariably complex, questioned, awkward, resented; a cause of suspicion, misunderstanding or discomfort; and certainly something to be negotiated, earned and cherished. In the case of the lapsed, there may well be a sense of guilt or regret, a change of life circumstances that might incur shame if subject to exposure or at least a certain defensiveness and anxiety about being judged or condemned. Few who have left a community anticipate the presence with them of a still-active member of that community as anything other than an occasion for censure or the expression of disappointment. An encounter in the form of ministry is likely to be planned, anticipated, expected; but a conversation in the mode of mission is rather more prone to be accidental, coincidental, spontaneous—in the grocery store, at the car wash, at a ball game. The rules are unclear, the courtesies aren’t established, neither the length nor the content of the dialogue are agreed upon. Presence becomes truly incarnational when it’s intentional—when it takes the risk of initiating contact and proposing to meet, or, in the case of a surprise encounter, looking to continue the conversation over coffee (then or later) or of being willing to visit another’s territory—a tangible expression that says “I recognize that there’s another legitimate, perhaps more significant and likely unheard, point of view.”

This article is excerpted from Incarnational Mission: Being with the World (Eerdmans). Reprinted by permission of the publisher; all rights reserved.