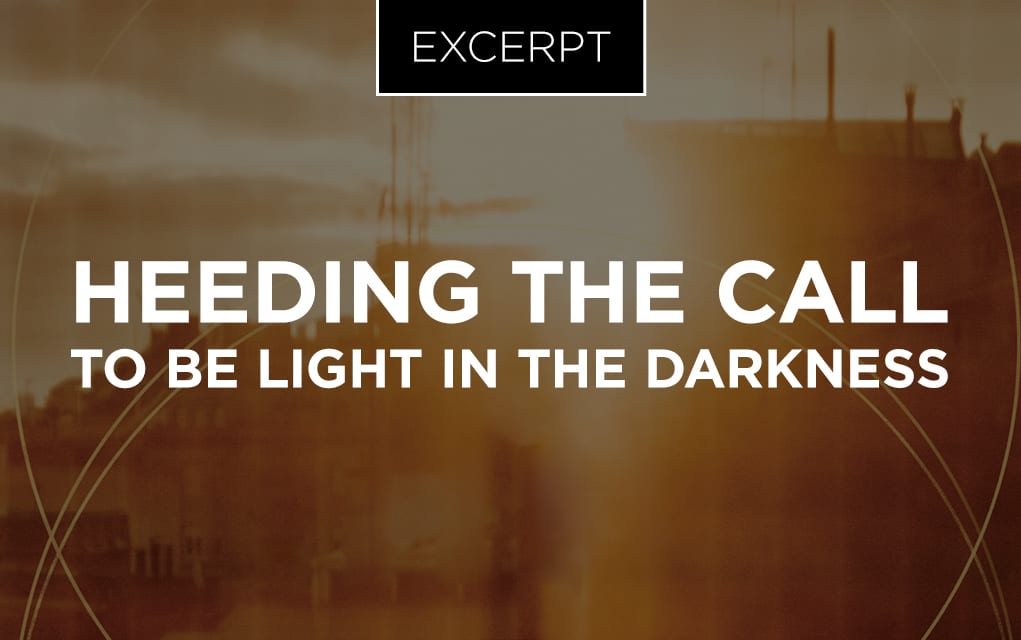 We must refocus on being the light that a dark world so needs.

Excerpted From
The Church in Babylon
By Erwin Lutzer

Where is your God?

That’s a question the world is asking Christians. It’s a question that should haunt us since, according to a Pew Research Center survey, more and more people are abandoning religion and giving up on God. The religious “nones” (those who self-identify as atheists or agnostics or who say their religion is “nothing in particular”) make up about 23 percent of the US adult population. And one-in-five Americans (18 percent) who were raised as Christians or members of another faith now claim no religious affiliation.

Many who have left the church perceive Christians as finger-pointing, self-righteous people who are quick to judge others but not themselves. In the church, they experienced backbiting, envy and materialism, but none of these sins were addressed. Their congregations highlighted moral and social issues and were quick to criticize those who disagreed with them politically. In walking away from the church, they also walked away from God.

One 35-year-old from California explained his aversion to the faith in a way that is, sadly, becoming more representative for his generation. “Christians have become political, judgmental, intolerant, weak, religious, angry and without balance. Christianity has become a nice Sunday drive. Where is the living God, the Holy Spirit, an amazing Jesus, the love, the compassion, the holiness? This type of life, how I yearn for that.” We are perceived as being blind to our own hypocrisy.

Many within the younger generation simply do not feel at home in our churches. They long to have honest sharing within a community of authentic believers who are realistic about their walk with God. They see many of our churches as being too formal, too rigid and prepackaged. Recently, a friend of mine visited a well-attended suburban church and found it to be unfriendly, joyless, buttoned up and “cliquish.” He said he’d never return.

Many of our churches pretend that all is well among the congregation, but beneath the surface the story is quite different. In his book The Christian Conscience, Ron Sider writes, “Scandalous behavior is rapidly destroying American Christianity. By their daily activity, most ‘Christians’ regularly commit treason. With their mouths they claim that Jesus is Lord, but with their actions they demonstrate allegiance to money, sex and self-fulfillment.”

From Outreach Magazine  Should Tolerance Be Tolerated in the Church?

But if Christians are to be light in a dark culture, we need to ensure we are not adding to the darkness.

A church that has assimilated the world cannot be a vibrant witness to that world. To adopt prevailing cultural values hardly gives the world a reason to believe that we are a viable alternative to lives of brokenness, greed and addiction.

America is polarized politically, racially, morally and religiously. Common ground with the wider culture seems to have vanished. Meanwhile, as I watch some of the angry and often violent demonstrations on television and read the vitriol on social media, I think it is not an exaggeration to say that we are in danger of mob rule. Someone has said, we are a nation addicted to rage. Yet, it is into this atmosphere of shrill voices and disdain for genuine tolerance that we have been called to represent Christ. The message we have and the lives we lead ought to permeate society and be a beacon of light in the approaching darkness. The church of Jesus Christ is still the best hope for the world. I love the church.

For 36 years it was my privilege to serve as the senior pastor of The Moody Church in Chicago—a church that has had a continuous ministry in the city for more than 150 years. I have witnessed many changes since the days when I was installed as the senior pastor back in 1980. At that time, the worship wars had hardly begun.

Today, I see the church as having to fight on multiple fronts while at the same time trying to maintain a positive ministry of bringing hope to the world. I see a church that desperately needs to learn the lessons that the people of God have to relearn in each generation: We have to be a church that is, in some ways, repulsive to the world because of our authentic holiness, and yet very attractive to the world because of our love and care. We need to be a courageous church in a time of weak knees and carnal living. In short, we have to live lives that are a credit to the gospel we preach and the Savior we worship.

God has humbled us, and we must enter into our cultural decline, not with a swagger, but with humility and brokenness. And transparency. Let those of us in our churches not sit in judgment of the world, however, for all too often we are the world, sharing in our culture’s sins and failures. Remember, it was because of Jonah and not the pagan sailors that the storm blew on the sea. Too often we are blind to our own darkness. We criticize the world for calling darkness light, but perhaps we do the same.

From Outreach Magazine  Why a Clear Succession Plan Is Essential

There is much good that is taking place in our churches, but too often our light flickers and our witness goes silent. We don’t have to agree with Spanish conquistador Hernando Cortes’ motives in order to appreciate how he convinced his men to help him conquer Vera Cruz, known today as Mexico. In 1519, he took about seven-hundred men and eleven ships and after they disembarked, a clarion call went out to destroy the ships. The men watched as their only means of returning home disappeared into the ocean. The point was very simple: There was a call, and the call was conquest. And there was no turning back.

Join me on this journey that seeks to help us refocus the light that a stumbling world desperately needs. We have the privilege of heeding the call to be a light that shines in the darkness. Like the men on the Mexican shore, there is no turning back.

Jesus said to him, “No one who puts his hand to the plow and looks back is fit for the kingdom of God” (Luke 9:62).

Excerpted from The Church in Babylon: Heeding the Call to be Light in the Darkness by Erwin Lutzer (August 2018). Published by Moody Publishers. Used by permission.