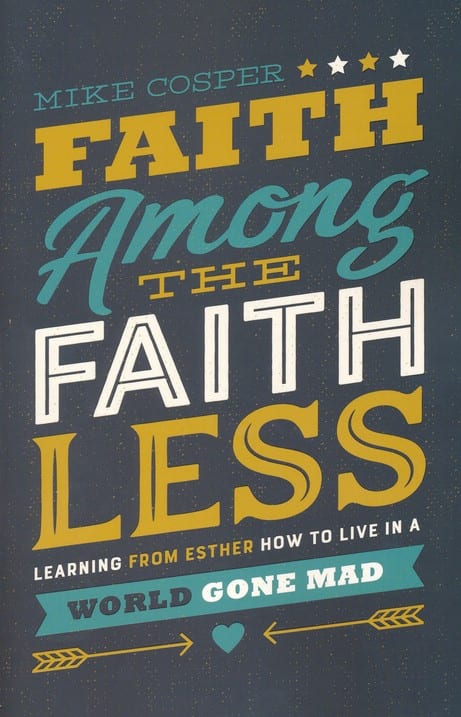 Mike Cosper: Learning from Esther How to Live in a World Gone Mad

Faith Among the Faithless
Learning from Esther How to Live in a World Gone Mad
(Nelson Books, 2018)

HE SAYS: “Our belligerent neighbors, the hostile factions and anti-Christian political crusaders, the powers that be in the world of media, education, and the arts, the evangelists for secularism and sexual liberation: These are not our enemies. They are, in fact, prisoners of a much larger, darker kingdom, and we can fight for their freedom by declaring war not on them, but war on their behalf.”

THE BIG IDEA: By studying the book of Esther from a new perspective, we can be encouraged to live in today’s culture and make a difference.

THE PROGRESSION:
The author takes the book of Esther a section at a time and breaks it down to show how the text relates to living in the 21st century.
In each chapter he parallels what was happening in Esther’s life to what we face in the culture today.

“They present Esther as if she were a pillar of virtue . . . Her story is more complicated than that. And much darker. It’s less VeggieTales and more Game of Thones.”

A CONVERSATION WITH MIKE COSPER

What made Esther’s story the ideal one to center this book on?

Esther’s story is uniquely illuminating for our times because of the world Esther lived in. She was immersed in Persian culture, she had a Persian name (in fact, Esther is likely derived from the Ancient Near East goddess Ishtar), and for much of her story, everyone believes that she is in fact Persian. I think the case can be made that many Christians are experiencing something similar. We grow up immersed in a culture that no longer is shaped by Christendom, and we aren’t immersed in the kinds of formative traditions that previous generations benefitted from. As a result, we feel very compromised, and often unsure of how to live faithfully in a world that is increasingly hostile. Esther found a way. She reached a moment of crisis and then chose a pathway of vulnerability and courage that not only saved all of the Jews in exile, but also saved her own soul in the process. By looking at her story, we can see a pathway to being a faithful presence in a hostile world.

How can pastors use your book to encourage their congregations who might feel discouraged in today’s culture?

I think Christians are disillusioned on two fronts. On the one hand, they’re discouraged by the loss of cultural influence and the rise of progressive cultural values and ethics. On the other hand, they’re discouraged by Christians—both conservatives and liberals—who are willing to compromise their own values or beliefs to maintain some of that cultural influence. Esther’s story points to a better way, one that holds tightly to a sense of conviction (for Esther, this meant reclaiming her Jewish identity) while refusing to chase after worldly expressions of power. She rescued God’s people by making herself weak and vulnerable, a pathway we can see now is the way of the cross. Embracing our own vulnerability actually leads us nearer to the heart of God and offers us the only real comfort and assurance available in this world.

Describe what it means to reframe how we see ourselves in the world.

All of us have a way of seeing ourselves in the world. It’s something that we’ve imbibed slowly through the habits, practices and stories that we’ve been immersed in since childhood. For Esther, those habits, practices and stories immersed her first in a Persian—that is, pagan—way of seeing. For many of us, that way of seeing has been shaped by the culture around us: entertainment, social media, politics. When Esther is confronted by Mordecai and called to stand with God’s people, she experiences a kind of awakening, and her world is never the same. I don’t think it’s a coincidence that the book ends with the inauguration of Purim, a new religious festival. Esther and Mordecai understood that they needed to embrace a new set of habits and practices that would help the Jews cling to their unique identity, and Purim kicked off that renewal. I think many of us need a similar awakening. We can see Esther’s story as an invitation to see the world in a new way, and to pursue a new set of practices that can shape us to live as God’s people, even in a hostile environment.