Home Resources Books A Biblical Alternative to the Culture of Scarcity 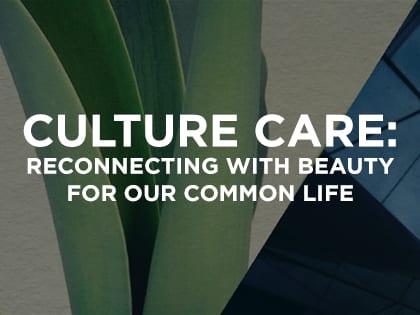 Discover how to interact and create cultures that produce a deeply good work that goes beyond mere utility to touch the soul.

One of the most powerful sources of cultural fragmentation has grown out of the great successes of the Industrial Revolution. Its vision, standards, and methods soon proliferated beyond the factory and the economic realm and were embraced in sectors from education to government and even church. The result was reductionism. Modern people began to equate progress with efficiency. Despite valiant and ongoing resistance from many quarters—including within industry—success for a large part of our culture is now judged by efficient production and mass consumption. We often value repetitive, machine-like performance as critical to bottom-line success. In the seductive industrialist mentality, people become “workers” or “human resources” who are first seen as interchangeable cogs, then treated as machines—and are now often replaced by machines.

A related cultural fault line is hyperspecialization, where a person or firm focuses on increasingly narrow segments of a production process, discipline, artistic genre, or market. One result is an increasing prominence in our culture of the “expert.” The expert knows one part, not the whole, and often not even the wider field in which they work. They consciously reduce their scope of concern to go deeper in their discipline. But increased clarity on a narrow point usually comes at the price of blindness to context and to one’s working assumptions. It often brings isolation from—and sometimes alienation from or hostility to—those with differing expertise.

Today’s expert usually shies away from questions of meaning and connection and responsibility—referring such issues to those who “specialize” in meaning. This is, of course, fundamentally unsatisfying for human beings and contributes to our cultural unease. It also has troubling consequences within a discipline. My father’s career offers an example of this.

My father spent years at Tokyo University after his research with Chomsky, and he later joined the famed Bell Laboratories pure-research complex in Murray Hill, New Jersey. It was at Bell Labs in the early 1970s that he began to notice fundamental deficiencies in acoustics research. In the 1980s, in his early fifties, my father began to send a series of notes to his colleagues questioning basic tenets of their field. He found many of their approaches flawed because they were based on reductionist assumptions. They did not fit the data and were thus inadequate and unable to reach their stated goals.

From Outreach Magazine  Why a Lamb Must Be One Year Old

In my simplified understanding, the early research assumed that you could generate enough data to rebuild speech by segmenting speech patterns. It seems a bit like dissecting a frog and stitching it back together, only to expect it to jump again—a typical modernist approach. Researchers expected to be able to simulate natural-sounding human speech within a decade, and they predicted the rise of technologies like Apple’s Siri and Google’s voice navigation. But my father was right. Even the best such technologies thirty years later sound choppy and machine-like.

Though he was dealing with a community of scientists—who are supposed to be known for their mental flexibility—it took years before my father could present his new ideas to the linguistics/phonetics community. Many tenured professors, I am sure, found his claims threatening to their assumptions. Prior to this time my father had never had problems finding support for his research, such as government grants, but now he found himself fighting the research establishment that he had himself helped to build. After many futile attempts to secure funding, my brother, a successful Silicon Valley entrepreneur, stepped in to fund a post for a graduate student to help my father compile enough data to begin his research.

That today’s computer voices sound as good as they do is in part the result of my father’s work. After the breakup of AT&T in the 1980s, he spent many years at Ohio State trying to introduce a new path called C/D (Converter/Distributor) theory. This theory is not so much concerned with segmenting language as with recognizing patterns of vocal stress and intonation. He calls this approach prosodic, as it better accounts for the natural complexity of speech and language.

We Are More Than What We Produce

Most of us recognize the shortcomings of reductionism at a deep level: we know that we are more than what we produce and that efficiency is not the point of education, religion, art, play, or many other aspects of human culture. Most people are dissatisfied with the reductionist viewpoint, yet not enough of us have or can articulate viable alternatives because reductionism has taken over not only how people define success but also what we value in society. Many in our culture no longer value a bouquet of flowers because beauty contributes neither to the machinery of production nor to an advantage in the latest cultural battle—and because the pressure for continued consumption warps our capacity to appreciate and enjoy.

It is not the desire to survive or to provide for a family that is problematic. Cultural fragmentation comes rather when we fall into the trap of treating survival as the bottom line and thus neglect the holistic approaches that demand personal growth and point our civilization toward a greater vision. Fragmentation comes when we forget the importance of beauty for our lives and the necessity—for both individual and social flourishing—of sharing the experience of beauty in community.

In the face of reductionism, we must recall that human beings are not “human doings,” as one of my mentors says. We are more than animals following our instincts to compete and survive. Human culture encompasses more than loyalty to a den, herd, or pack. Our concern as individuals and families should thus be to raise, educate, and form whole persons—to cultivate connected citizens who can co-create thriving communities, cities, and nations.