Home Resources Books Why Praying for Missionaries Is Pivotal 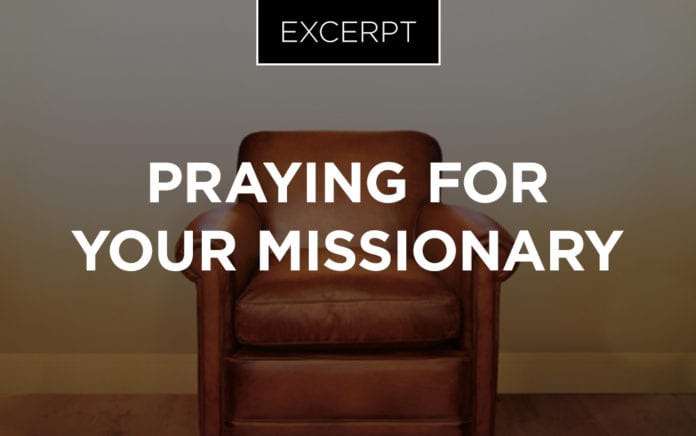 We often feel inadequate or simply forget to pray for missionaries, but consistent prayer is the most significant means of support.

Excerpted From
Praying for Your Missionary
By Eddie Byun

The Gift of Prayer

I’ve been in pastoral ministry for over twenty-three years now, spanning four countries—America, Canada, Australia and South Korea. So I know how hard, lonely and challenging being a pastor can be. I grew up thinking pastors didn’t have the same kind of struggles that “regular” people had, but I know now that they bleed, bend and break just like everyone else. In the early years of my ministry, I never shared the struggles I had with anyone, especially my congregation, because I didn’t want them to think I was a weak leader or a spiritually immature pastor. But after I finally got over my ego and reputation, I knew I had to let people in to see the real me—struggles, shortcomings and all. One way to increase my vulnerability in front of my congregation was to preach a sermon series on the many challenges that pastors face. The angle I took was to teach our church how they could more effectively pray for their pastor.

When I first did that sermon series several years ago, a common response I received from people after the sermons was, “Eddie, you’re making me feel so guilty!” (because they weren’t praying for me). Far too many congregation members confided in me that they simply forget to pray for me. Some said they thought pastors didn’t need prayers because they were so holy and already had a close walk with God. Others said they didn’t feel their prayers would make a difference because they felt so spiritually weak. I realized the Enemy had done far too good of a job in making the church believe their prayers weren’t needed and were powerless. The church believed these lies. There is power in prayer because of the One who hears our prayers. He calls us to pray to him, commune with him and partner with him in prayer so his kingdom purposes can be realized here on earth, as it is in heaven.

I also felt led to raise prayer support for missionaries. I discovered that we forget to pray for our pastors, who we see each week, how much more do we forget to pray for our missionaries, who we don’t see often. In general, it’s “out of sight, out of mind.” A number of missionaries shared that when they came back to their sending churches they felt discouraged because no one had read their updates, and some congregation members didn’t even know who they were. I want this book to be a means of getting our missionaries back on our radar on a daily basis. They need our prayers. They need our support. And this book is a small gift to our missionaries to help increase the prayer coverage from their family, friends and supporting churches.

From Outreach Magazine  The State of the American Church: What the Numbers Are Telling Us

We all have a role to play in global missions. We may not all have the same role, but we do have a role. God calls many to go to the nations as they declare and demonstrate the gospel of Jesus Christ. God also calls others to support those who go by giving financially, praying faithfully and supporting creatively. I discovered quite early on in my ministry that if I wasn’t going to be sent overseas as a missionary, then my role would be to support missionaries and do my best to send out missionaries from the churches I would be pastoring. Through this book I want to raise up more prayer support for missionaries whose lives have been dedicated to bringing the gospel to the world’s unreached places.

Another reason for this book is that I want to go home—to heaven. Jesus tells us in Matthew 24:14, “This gospel of the kingdom will be proclaimed throughout the whole world as a testimony to all nations, and then the end will come.” The end of this world and the beginning of our glory with Jesus is connected to the completion of Jesus’ Great Commission (Matt. 28:18–20). For this to happen, we need more missionaries and more support for our missionaries so they will have the strength, resources, partnerships and joy to last their whole lives. They will be more effective with more prayer. And I want to do my part in providing that help.

Excerpted from Praying for Your Missionary by Eddie Byun. InterVarsity Press. Copyright 2018. Used by permission.