Home Resources Books Why Thankfulness Is Key to Navigating Alzheimer’s 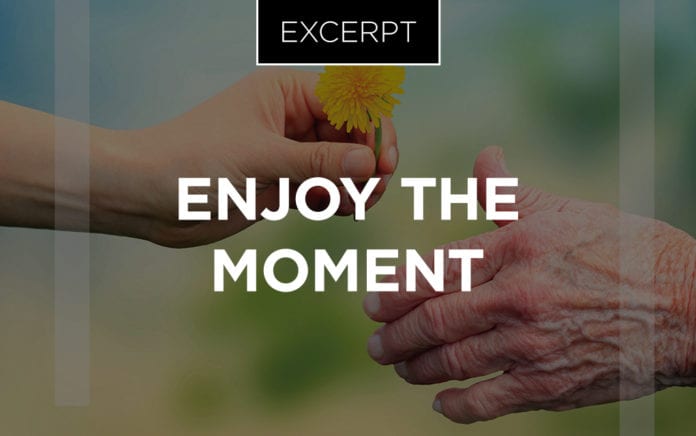 “A big part of how well you navigate hard things in life—whether disease or some other kind of heartache—is going to be determined by what you choose to dwell on.”

Excerpted From
New Every Day
By Dave Meurer

Dale regularly takes her mom on a drive in the rural parts of our community, because Karin was raised on a farm and loves to see cows and horses. By the time Dale pulls back into the driveway, Karin has often completely forgotten that they went anywhere or saw anything.

So, was it a waste of time?

Because, while they were seeing the animals, Karin was having a wonderful time.

“Look at all those cows. We had Jerseys. And look at that Palomino! What a beautiful horse!”

She will comment on the trees, the color of the sky, the startling profusion of roses in front of a certain house.

So much of navigating Alzheimer’s is about living in the moment. If your loved one can have joy in the immediate present, that is wonderful. Enjoy it with them while they still have the capacity for little pleasures of life.

Yes, it can be disappointing to cook a wonderful holiday meal and have a nice evening with mom or dad and then have them ask you two hours later when the turkey will be ready. But it wasn’t a waste. You had the meal together, and that is a success. It is now a memory for you, even if it isn’t a memory for her.

Having mom join you for a meal, even if she forgets it in a few minutes, is infinitely better than having mom bedridden and unable to speak.

Enjoy those moments when you can still bring her a smile, when she can enjoy the Christmas tree, when she can give you a hug goodnight. Things are going to get worse, not better. You have to make the most of what you still have.

A big part of how well you navigate hard things in life—whether disease or some other kind of heartache—is going to be determined by what you choose to dwell on. I learned that lesson forcefully when I met Captain Brien Thomas Collins back in 1992.

From Outreach Magazine  A Seismic Shift in Outreach

BT, as he liked to be called, was a Green Beret captain on his second tour of duty when a grenade exploded, shredding his body and nearly costing his life. Years later he was at a Fourth of July picnic, telling a small group of us about the event that forever changed his life.

“So I lost an arm and a leg in Vietnam,” he said, motioning with the metal hook that served as his hand. Then he flashed a smile and continued, “But I still had an arm and a leg.”

Two sets of facts were equally true. But BT decided to focus on what he still possessed instead of what he had lost. And that choice defined what kind of life he would choose to have. It also shaped the message he would take to his wounded comrades: You can spend your life angry and bitter about what has happened, or you can go on from here and make a life worth living. Choose.

After the blast that mangled his body, BT spent 22 months in seven military hospitals as doctors pieced him back together and remedied his numerous complications. But when he got wind of a soldier who had lost a hand, an eye, or suffered some other grievous injury, he would cancel his own medical appointment and head to where that soldier was—sometimes driving for hours to meet a wounded warrior he didn’t even know.

It was one thing for a completely healthy doctor to tell an amputee that he could still have a good life. It was quite another to hear that message from Captain Collins.

All of us have wounds, losses and heartaches. And it is healthy and normal to mourn for a season. “To everything there is a season.”

From Outreach Magazine  How to Prepare for a Productive Planning Retreat

But our human default is to maximize the bad while we minimize all that is still good. This may sound a bit like a lecture, and I don’t mean it to be that. It is a pep talk my wife and I have to give each other all the time. Because life has thrown many hard things at us. It isn’t just dealing with the often exhausting complexities of Dale’s mom’s condition. It is about all the many ways that so much goes wrong in life.

The scary diagnosis of a condition that isn’t going to go away. The list of medications. The job that went away. The offer that was so close, but didn’t pan out. The news from the doctor that surgery is required. The accident. The hospitalization. The huge financial loss through no fault of your own. The terrible boss who insists on signing off on every key decision but then refuses to answer your calls or e-mails. The death of someone who meant a lot to you.

When life was really rough, we decided to start each day by each mentioning three things we were thankful for. No matter how bad the circumstance we were going through, we forced ourselves to do this exercise.

Dale: “Flowers, the scent of pine trees, and a fresh picked peach.”

Each day we picked something new. And it really did help shape our attitude for the day.

Go ahead and try it for a week, even if it seems kind of forced or even kind of silly. It can’t hurt, and it might help.