Home Resources Books What You Need to Know About Suicide 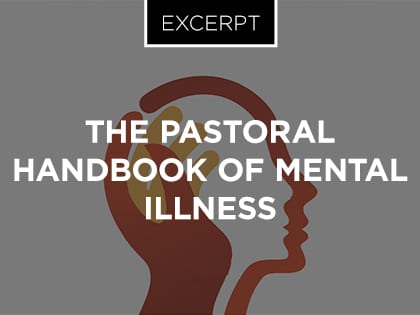 Understanding the underlying cause of suicide is important if we are to help our friends, family and counselees.

Excerpted From
The Pastoral Handbook of Mental Illness
By Steve Bloem

Suicide is often the result of, but not limited to the following affective disorders: bipolar mania and bipolar depression; major depression, perinatal (sometimes called postpartum depression disorder) and schizoaffective disorder and we find it especially present in borderline personality disorder.

Suicide in the United States has surged to the highest levels in nearly 30 years, with increases in every age group except older adults. The rise was particularly steep for women. It was also substantial among middle-aged Americans, sending a signal of deep anguish from a group whose suicide rates had been stable or falling since the 1950s. The suicide rate for middle-aged women, ages 45 to 64, jumped by 63 percent over the period of the study, while it rose by 43 percent for men in that age range, the sharpest increase for males of any age. The overall suicide rate rose by 24 percent from 1999 to 2014, according to the National Center for Health Statistics. The increases were so widespread that they lifted the nation’s suicide rate to 13 per 100,000 people, the highest since 1986. The rate rose by 2 percent a year starting in 2006, double the annual rise in the earlier period of the study. In all, 42,773 people died from suicide in 2014. The current suicide rate for veterans is more than 20 per day.

I am no stranger to the temptation of suicide. In a previous book, Broken Minds: Hope for Healing When You Feel Like You’re Losing It, which I co-authored with my wife Robyn, I tell the story of my own suicidal ideation and plans. I was spared that heinous act by God, and by his grace alone I didn’t attempt it. But the psychic pain of my deep depression was so severe that I must say, I considered it. I was on a self-imposed suicide watch with my family and friends. I walked and prayed short, desperate prayers while I began the exhausting search for an antidepressant that would take away my depression.

My sister, Cindy, who also inherited the bipolar gene, bought 20 of our books and gave them to some of her friends and our cousins. She read it and knew that she and I both suffered from this mental affliction. Yet, in 2006, she took her own life in the midst of a depressive episode.

The Elephant in the Room

Suicide is a subject about which very few speak. It is also the hidden death in the obituary. So and so “died suddenly” or “unexpected” are usually the terms that cloak the painful truth.

It happens all the time. If you don’t believe that, just look at the statistics that opened this chapter. Some people shrink from discussing it, feeling almost superstitiously afraid of the topic or believing that they will put the idea into someone’s head. Believe me, if your loved one or church member is suffering from a depressive illness, he has already thought of suicide and probably has a plan. If you broach the subject, you will not be leading him to that end. You will have the opportunity to tell him you will find him help and you will support him until he gets well again.

Suicide is like a plague that moves through communities killing its victims one by one and those who seem immune to it ignore the possibility of death until it takes someone they love. Then it becomes a dangerous adversary. But instead of attacking it head-on, we hide it from the others who are susceptible. Why do we continue to disguise ourselves or our friends and family members as cheery and buoyant when they are woefully depressed? Because we believe it is a character flaw to be depressed? Because we don’t honestly believe it is a biological disease? Well, it is, and it is happening to our sons and daughters, to our children and our parents. We need to talk about it, stop the shaming and blaming, and get help for anyone who is experiencing this illness before it is too late.

From Outreach Magazine  How Jesus Meets Our Heart's Deepest Longings