Home Resources Books How Should Christians Think About Depression? 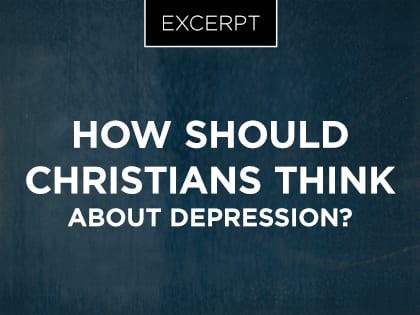 The Western world treats depression and melancholy as simply a biological disorder, but that is only part of the story.

Excerpted From
Depression, Anxiety, and the Christian Life
Revised, Updated, and Annotated by Michael S. Lundy

For Puritans as a body, the good life was the godly life, and the godly life was a product of thought: thought about the framework of obligations (duties) that God has established in his Word, thought about the blood-bought forgiveness and acceptance by which Christians live, thought about God’s gracious promises, thought about means to ends and thought about the glory of God as the true goal of all created life. Puritan instruction in behavior and relationships was thus first and foremost a matter of teaching people to think (or, to use their regular word for this, to consider): to reflect, that is, on how to serve and please God in response to the truth and grace he has made known in creation, and in and through Christ. Here, however, as the Puritans clearly saw, problems arose. They knew, of course, as did and does just about everyone in the Western world, that each human being is a psychophysical unit, in which the body and the mind, though distinct, are currently inseparable, and either may make its mark functionally on the other, for better and for worse. One problem here, whereby physical factors led to a measure of mental unbalance, was what the Puritans labeled melancholy. Differently diagnosed, it remains with us today.

The word melancholy, which nowadays is a simple synonym for sadness, was in the seventeenth century a technical medical term. It comes from two Greek words meaning “black bile.” The theory was that the human body contained four “humors” in different proportions, namely:  blood, phlegm, yellow bile and black bile. One of these, by predominating, determines each person’s temperament (another technical term in those days)—that is, one’s behavioral and dispositional quality. A person could be sanguine (abounding in blood: hopeful, enterprising, and liable to overdo things), or phlegmatic (cool, detached, lethargic, perhaps chillingly so), or choleric (impetuous, aggressive, sometimes explosively so) or melancholic (gloomy, pessimistic, apt to run scared and to suffer from despairing, destructive fantasies). Richard Baxter’s observant, analytical mind, which fitted him to function for a time as Kidderminster’s amateur physician, equipped him to focus and describe melancholy with precision on the basis of firsthand observational and pastoral interaction. His description can be summarized as follows:

Melancholy, as Baxter perceived it, was a psychophysical reality, a “diseased craziness … of the imagination” that might be caused by the body being out of sorts (“sorrows that come from your spleen”), or by overload or overstrain on the mind or perhaps both together. Its symptoms were at many points recognizable as distortions of Puritan ideas and ideals that pervaded the culture. They included fantastic fears: hell-centered, running riot in head and heart; also, delusive impressions of hearing voices, seeing bright lights, feeling touches and of being urged to blaspheme and commit suicide. Bad dreams were frequent. Melancholics characteristically could not control their thoughts; they were unable to stop despairing about everything, or to begin a discipline of thanksgiving and rejoicing in Christ or to concentrate on anything but their own hopelessness and felt certainty of damnation. They would cultivate solitariness and idleness; they would spend hours doing nothing. They would insist that others did not understand them, and that they were not sick but only realistic about themselves and they would prove perversely obstinate in the matter of taking medication.

From Outreach Magazine  Back to School: 4 Outreach Ideas

The treatment that Baxter as a pastor recommended boiled down to never letting melancholics lose sight of the redeeming love of God, the free offer of life in Christ and the greatness of grace at every point in the gospel; not attempting to practice the “secret duty” of meditation and prayer on one’s own, but praying aloud in company; cultivating cheerful Christian community (“there is no mirth like the mirth of believers”); avoiding idleness, and making good use of a skilled physician, a discerning pastor, and other faithful Christian mentors and friends, for support, guidance, and hopefully a cure.

The measure of our appreciation of Baxter’s ministry to depressed Christians will surely be the extent to which we go with his view of man, sin and grace. There is no disputing that Puritan theology was generically Reformed, and Reformed theology was (and is) generically Augustinian, and Augustine’s theology was generically Pauline and Johannine, on the basis of a view of Scripture as authoritative divine truth, unchanged and unchanging. Both Paul and John insist on the radical perversity of the fallen human heart, and the equally radical quality of the inward change that the Holy Spirit effects when he brings a person to saving faith in the Lord Jesus Christ. Tuning in to Ezekiel’s imagery of the new heart and the new spirit (Ezek. 36:26), Paul speaks of this change as a new creation (2 Cor. 5:17), and John pictures it, as did Jesus himself, as a new birth (1 John 2:29–3:9; see also John 3:3–12). Puritan pastors as a body, like Baxter, saw everyone as naturally, deep down, in the grip of sin: that is, of rebellious, anti-God pride and self-centeredness. They took it as their business to present to sinners the truth about Jesus Christ the Savior, and the reality of Christ himself, the risen, living, present Lord; to call on them to respond to the good news of grace; and to guide faithful responders to glory by drilling them in clear-headed, wholehearted discipleship to their Master.

Baxter’s own Reformed Pastor shows what this task meant for him personally, and Mr. Great-heart in the second part of Bunyan’s Pilgrim’s Progress profiles it in broadest terms. What we call depression and Baxter called melancholy, compounded as it is of non-rationality, delusion, the sloth of inaction, and the gloom of despair, keeps its victims from thoughtful, perceptive, resolute commitment to Christ, with hope, joy, and love, that the gospel calls for. So it should seem no wonder that Baxter saw the relieving of melancholy as a major task for the pastor, nor that he should prescribe for its relief a modified version of Christian devotional disciplines.

The approach to depression, however, that marks today’s Western world parts company with that of Baxter and his Puritan colleagues all along the line. To start with, the historic Christian notion of community has been replaced by a secular, pragmatic, this-worldly mind-set which takes for granted that everyone’s proper goal is a pain-free, well-socialized, self-fulfilling functional efficiency in whatever style of life one may choose to embrace. Depression is viewed now not as a specific disorder of already disordered and misdirected human nature but as mental illness, a phenomenon on a par with physical illness, namely, the malfunctioning of an organ or process that is built into the human system. Clinical depression is a label for any state of diffused gloom and sadness that negates endeavor, achievement, and satisfaction with life, and breeds discontent and hopelessness in their place. It is nowadays linked with panic disorder, and aspects of schizophrenia and bipolar disease, as a condition that well-chosen medication should be able to relieve.

So far, no doubt, so true. My only point is that when Christians are in depression, this is not the whole story; for such depression is not ordinarily viewed as evidence that human nature in itself is fallen out of shape, nor as a reality with which pastors of churches or leaders of Christian groups are in any way qualified to deal. The assumption is that depressed persons should be guided to members of the medical, therapeutic, and helping professions, who will, it is hoped, through antidepressant drugs linked where necessary with structured counseling, succeed in restoring the victims of oppressive sadness to a life of rational, cheerful enterprise. Within this world of diagnosis and treatment all forms of religion are commonly suspect as unbalancing eccentricities, and Christian pastors in particular are in effect, sometimes explicitly, requested from time to time to keep their hands off.

Unquestionably, there is gain, within limits, in the modern development of depression therapy, but there seems to be loss too. Pastors in the Reformed, Puritan, and evangelical traditions see it as their business to keep teaching the truth about Jesus Christ, crucified and glorified, through whom the Holy Spirit will work moral-spiritual transformation in the lives of those who turn to him, seeking salvation from the guilt and power of sin. Such pastors, serving people in this way, when faced with depression will surely wish to bring at least some of the thinking that Baxter exemplifies to bear on the situation.