Home Resources Books The View From Below 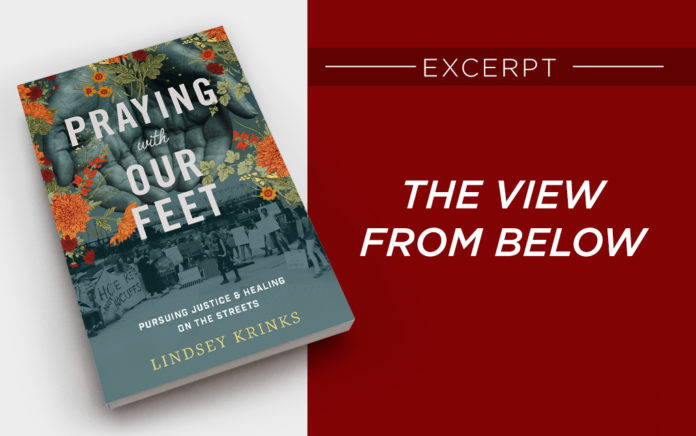 Excerpted from ‘Praying With Our Feet’ (Brazos Press)

Excerpted From
Praying With Our Feet
By Lindsey Krinks

Every city has an underside. For every luxury condo and its gleaming rooftop pool there is a slum teeming with untended wounds, the stench and rot of decay, bedbug bites on the bellies of babes. Every city has a darker version of history told—or not told—by the conquered, the displaced. And as soon as I saw the first flicker of this wretched, blessed dark, I was drawn to the shadows like Icarus to the sun.

The first time I fell in love with the underside of a city was with Richard in 2006, a year before my baptism into activism. My heart hammered in my chest as I kept watch on Seventh Avenue to make sure no one was coming. Nightfall wrapped the buildings in deepening blues as what was left of the afternoon’s rain shimmered on the pavement, holding a blur of golden lights. Richard lifted the heavy steel grate from the sidewalk and waved for me to climb in first, to descend beneath the city’s surface on a cold iron ladder.

“Are you sure you’ve done this before?” I asked.

“Of course,” he said with a grin, chestnut eyes glinting against the night. Richard had a beatnik feel to him, with a tinge of magnetic grunge. Something reckless flickered in us both. He was careless and free in a way that drew me in, so down I climbed. My arms and legs quivered with adrenaline as I fumbled down each narrow rung. Richard followed me, closing the grate over our heads. I looked up from the bottom and could see slices of the world I knew above us. I was shaking but played it cool.

My eyes adjusted to the dim light of a round, concrete tunnel that smelled of metal and rust and grime. Two massive charcoal pipes ran alongside us, one to our left, one to our right. One carried cold water, the other hissed with hot. They traveled straight down Seventh Avenue as far as the eye could see, shrinking to a pinpoint in the distance.

I must have nodded because we started walking along the damp, forbidden path between the pipes. We came across a blue-jean shirt crumpled in the shadows.

“Was that there the last time you came down here?” I asked.

Richard lowered his voice. “I don’t know,” he said, leaning in with a dramatic pause. “Maybe, if we’re lucky, we’ll both make it out alive.”

“Not funny!” I said, shoving his shoulder.

I followed Richard, putting one unsteady foot in front of the other. We walked south, following Seventh, and turned left at the tunnel that ran beneath Broadway. Music from honky-tonk bars intermingled with the hiss of pipes. There was laughter. The sour tang of beer. A loudening cacophony of country music. Neon lights glimmering through grates.

This was our city, the city we loved. We had both walked up and down Broadway before; now we were beneath her shine. Later I would come to know the underpasses and alleys, the shantytowns and slums. I would learn that once you begin to notice the flattened cardboard and blankets beneath bridges, the footpaths into the woods behind gas stations, the flash of blue tarps through the trees, you never see things the same way again. Once you begin to understand the city not from above but from below, it changes everything.

Excerpted taken from Praying with Our Feet by Lindsey Krinks, ©2021. Used by permission of Baker Publishing BakerPublishingGroup.com.