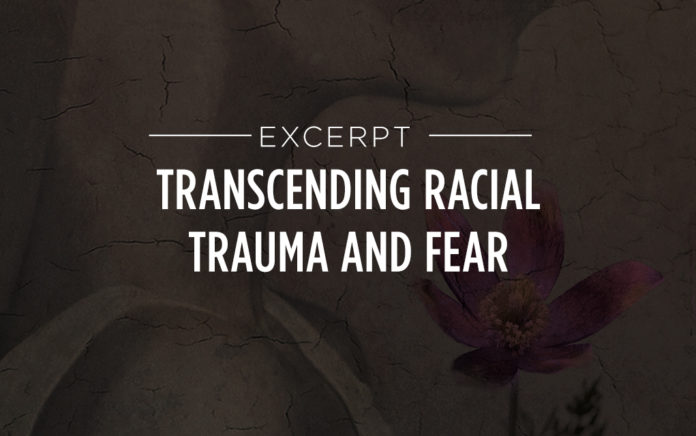 There is also strength in numbers when people of color show up en masse.

Many First Nation Christians have also embraced the vision from the book of Revelation. They see their people standing around the throne of God with palm branches in their hands and praising God in their mother tongues. There is a place for the Shinnecock there, and it is by God’s grace that the Shinnecock are still standing here. They are a sovereign nation within this country, refusing to let their way of life die. Sometimes life on the reservation can be difficult, yet the Lord loves and saves these resilient people. The Presbyterian church is an integral part of life on the reservation. During the summers Kanti attends the church and actively serves where she is needed. On matters of First Nation Christian faith Kanti says, “As young Christians we were told that the First Nation faith and rituals were taboo, but now Christians are integrating their faith with their rich culture.” Kanti longs for more of the Shinnecock language and culture to be included in the Presbyterian worship services on the reservation.

They are not engaging in syncretism, practicing their traditional religion alongside Christianity, but they are looking at their First Nation culture and religion and finding where the Creator, Jesus and the Spirit have been there all along. They read the Scriptures in their mother tongue and have incorporated traditional drums into worship. Megan Murdock Krischke, who helped launch and grow Native InterVarsity, says, “There are quite a few Native traditional values that are biblical.” She shared how First Nation tribes respond with generosity and hospitality like the early church in the book of Acts. They also value family and relationships over accomplishments. One interesting difference in Christian First Nation churches, she says, is that the worship songs are more petitionary and the focus of prayer is oriented toward praise and adoration. Unlike the more Eurocentric approach, there’s an oral and storytelling way of doing Scripture study. Megan observes, “There are a lot of things non-Native Christians could learn from Native culture.”

Kanti says, “I cope with racism and racial trauma by going to the reservation and talking with my family, my cousins, and my 90-year-old aunt. I get away from the outside world, and any trauma that we have is talked about in a group. We help each other deal with those outside influences.”

Kanti spoke of how circles are important to the Shinnecock. The circle is symbolic; it has no end: “We do a lot of things in circle.” It represents the never-ending connection she has with God and the interconnectedness between the members of the Shinnecock Nation. This connection was evident to Kanti when her husband passed away several years ago and her dearest cousin dropped everything and sped to Philadelphia to be by her side. The tribe also rallied around her. The circle also represents interconnectedness between First Nation tribes. The annual powwow is a gathering of tribes united on the circle. The Shinnecock powwow is held on a raised circle or mound where the different sovereign nations—dressed in stunning indigenous attire—present traditional drumming and dancing. Below the circle are the observers. Apart from the pageantry the powwow is a time for the nations to come together and feast, exchange ideas and strategize about how to make things better for First Nation peoples.

From Outreach Magazine  Steve Wilkens: What’s So Funny About God?

As recent as the 1970s, the children of First Nation tribes were placed into boarding schools and attended public schools where their language was not taught or spoken. The result is that many of the preceding generation are unable to speak the language. Kanti is delighted that the Shinnecock are now reclaiming their language. The Shinnecock now have a school on the reservation where a whole unit is devoted to their language; even the little ones in preschool are learning to speak it. Kanti is eager to move back onto the reservation, but space is limited, so she will have to wait for someone to pass on in order to get a piece of land. She is willing to wait. For now she spends as much time on the reservation as she can and contributes where she can. She feels hopeful as she sees some of the young people taking a stand for the tribe.

Attorneys, other professionals and working people still live on the reservation. Others work hard on the outside, and some who left the reservation for college have returned. Kanti says, “It’s important for the young ones to see them return and stay.” Recently there have been other hopeful signs that the town of Southampton is honoring the Shinnecock culture and tradition. A builder found bones on a development site that clearly is part of the Shinnecock burial grounds. The town paid the developers for the land and returned it to the Shinnecock. The Shinnecock are still awaiting the final word on litigation about their stolen land and fishing rights. Perhaps the town and the country will finally do the right thing.

Jonathan has been able to deal with fear, as Audre Lorde’s famous quote states, “Caring for myself is not self-indulgence, it is self-preservation, and that is an act of political warfare.” Jonathan has found that prioritizing the care of his soul has been a major contributor to stress relief. His soul is fed through reading Bible verses such as Philippians 4:6‑7: “Do not worry about anything, but in everything by prayer and supplication with thanksgiving let your requests be made known to God. And the peace of God, which surpasses all understanding, will guard your hearts and your minds in Christ Jesus.” Jonathan senses God’s peace, and the fear for his physical safety recedes. The same is true when he spends time praying, listening to worship music, hanging out with friends and riding his bike. He is a prolific writer of poetry and prose, pouring his heart out on paper. He also engages in activism, attends protests, organizes and votes. Jonathan is hopeful with the recent appointment of Boston’s 45th police commissioner, the first person of color to hold that position. It means a lot to Jonathan and the community that the new commissioner was sworn into office at an African American church in the ’hood. Jonathan’s activism has helped alleviate his fears and anxiety. He no longer feels that change will never happen or that he is powerless; he now believes change is possible.

From Outreach Magazine  6 Ways to Boost Your Leadership Creativity

The fear that Jonathan and Kanti carried was not totally unfounded. The same is true for us, and in light of this we must determine to live unbound from fear. We likely will enter spaces and have encounters in the future that are explicitly or subversively unwelcoming or hostile. The question is how will we respond? It is wise to be aware yet refuse to obsess with worry: Am I going to be accepted or will I be treated unfairly? When there is another racist incident and fear rears its ugly head, we can remember God’s assurance of strength, comfort, love and grace to help us manage, overcome fear and confront whatever comes our way. There is also strength in numbers when people of color show up en masse. It sends a message that we will not cower in fear and anxiety. Whether in a group or alone, we have a God-given right to be there, and we can assert that right.