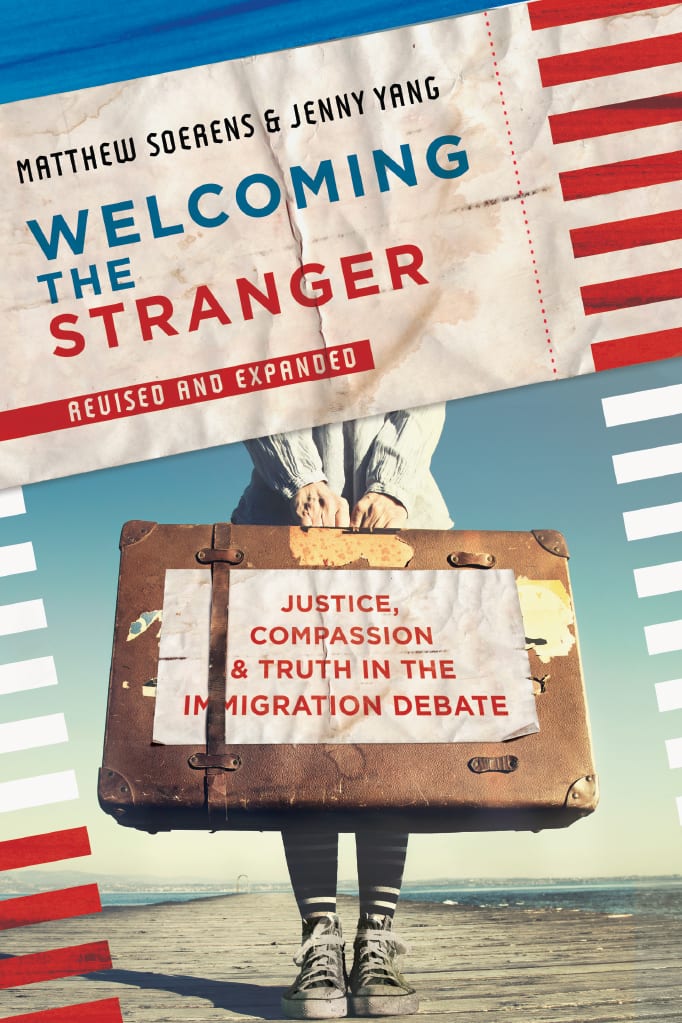 Matthew Soerens and Jenny Yang: Justice, Compassion & the Truth in the Immigration Debate

Welcoming the Stranger
Justice, Compassion & the Truth in the Immigration Debate
(IVP, 2018)

WHO: Matthew Soerens, U.S. director of church mobilization for World Relief and the national coordinator of the Evangelical Immigration Table, and Jenny Yang, senior vice president of advocacy and policy for World Relief.

THEY SAY: “We believe that obedience to Christ means committing ourselves, not just as a few individuals but united as God’s pople, to serving the sojourners among us and advocating alongside them, even (perhaps especially) when that is counterculture in our polarized political environment.”

THE BIG IDEA: The goal of this book is to encourage Christians to step back from the rhetoric about immigration and combine a basic understanding of how immigration works in the United States with a biblical worldview.

THE PROGRESSION:
The book begins by laying the groundwork for the rest of the work, defining terms and explaining what the authors hope to accomplish.
The second chapter attempts tor recapture the human element of the immigration dilemma, focusing on who refugees are. Chapter 3 presents a concise history of the United State’s immigration history.
Chapter 4 explains our current immigration legal system while Chapter 5 looks at immigration from a biblical and theological perspective.
Chapter 6 addresses concerns about immigration from a Christian perspective; Chapter 7 considers the impact of immigration on the United States.
Chapter 8 provides an overview of the political environment for immigrants and refugees within the Trump administration; Chapter 9 examines how many churches have engaged with this topic. The book concludes with suggestions for moving forward.

“Loving our immigrant neighbors well is not a temporary thing but requires long-term commitment that comes from a heart committed to God’s flourishing in the world.”

A CONVERSATION WITH THE AUTHORS

What motivated you to write Welcoming the Stranger?

Immigration is one of the most complicated issues of our time. Christians find themselves torn between the desire to uphold the laws and the call to minister to the vulnerable. We wrote this book to put a human face on the issue and tell stories of immigrants’ experiences in and out of the system, to debunk common myths about immigrants and the US immigration system, and to encourage distinctly biblical thinking about a topic that is often viewed merely as a political, economic, or cultural issue. Our goal was to paint a more balanced, positive picture of immigrants in our country. We also wanted the book to be a practical guide for how churches and individuals can engage in caring for their immigrant neighbors and advocating for reform.

Why is it important for Christians to think through the history of immigration and our current immigration system?

Understanding our immigrant history and the limits of our current immigration system, as well as the theology of migration and God’s care and concern for the vulnerable in Scripture, points the church toward a more compassionate, sensible, and just response. While evangelical Christians are often seen as hostile to immigrants, immigration has in fact been transforming the life of the church as evidenced by the growth of immigrant churches in the United States. At a time of heated debate around the country, Christians in particular can be a sensible voice for reason and compassion in our nation’s immigration discourse and debate.

What do you want readers to understand about immigration?

The Bible speaks repeatedly and specifically about how Christians should relate to the topic of immigration and, more importantly, to immigrants themselves, each of whom is a human being, made in the image of God, struggling to overcome significant challenges to give themselves and their families a better life.

The United States has had a complex relationship with immigration since its founding, which continues today. The way many immigrants came to the United States until the 1920s is starkly different from how our current immigration systems work, which is significantly more restrictive.