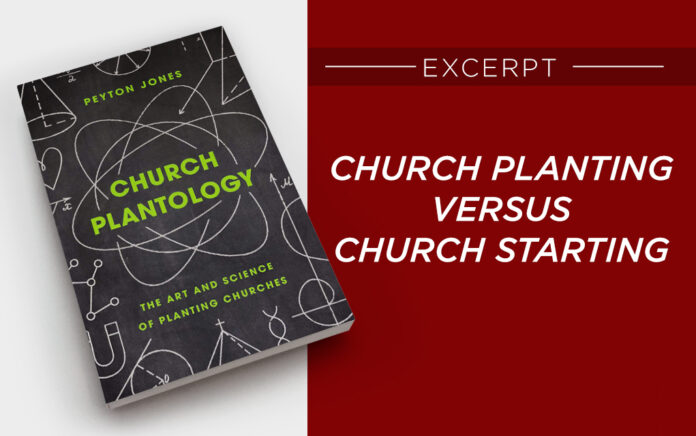 Much of what we call church planting in North America is actually church starting. The first difference between starting a church and planting one is that church starting begins with the church itself as its goal. This goal of starting a church can be translated to renting a large space, gathering a large crowd into it, and reaching “critical mass” so that the church can sustain financial stability and provide a paycheck. When boiled down to basics, what has been accomplished is a “pop-up” church that appears on Sundays and disappears the other six days of the week. In other words, church starting amounts to little more than starting a Sunday service.

Here are the six crucial steps to church starting:

Renting a building, creating a website, designing a logo and inviting people to a phantom church that exists only in our minds is an unusual practice. I’m not against raising funds or recruiting launch teams. Both can be helpful if your goal is church starting, but they aren’t as necessary in church planting as we’ve been taught by our own ranks of “J. Evans Pritchard” experts. Much of our fundraising and attempts at reaching critical mass mask the truth that we have attempted to strip all risk out of the endeavor in order to ensure “success.” But if “success” is measured by filling a room, we aren’t defining it the way Jesus or Paul did. Jesus emptied them on purpose and sent the crowds packing. Church starters may have “success” in filling a room, but at the cost of even greater loss.

What if gathering crowds occurs at the cost of mission? What if the large amount of expense it takes to start a church comes at the expense of making disciples?

If we invest everything in a Sunday service at the expense of mission, then everyone loses, particularly those outside the church. The church is in its current rut because we’ve learned to “do church” in a way that ensures no one ever really has to engage with the gospel at all.

From Outreach Magazine  8 Ways Your Church Can Help Orphans

Church Planting:
Begin with intense prayer.
Focus on bringing the gospel to the lost.
Enter the rhythms of the community.
Make disciples.
Pick a fight with something.
Move on and await divine opportunities.

Why does this church starting model look so different from what Paul did? Paul never rolled up on a community with his hip church name, sexy logo, rental agreement and flashy website and called it church planting. Nor could anyone remotely conceive of him participating in that method of operation.

In that case, why would we?

In Church Planting in the Secular West, Stefan Paas identifies the church growth movement as the scientific stream in evangelical church planting theory that comes from the Western emphasis on “empirically tested methods and developing research programs” that view numerical growth pragmatically.

If it produced results (i.e., church growth success), it should be adopted. The founders and advocates of this movement were largely concerned with church growth as produced by evangelism, and they unhitched church structure from the rig. As a consequence, discipleship all but vanished; unlike generations before that had gone to “community churches” that were small, yet intimate, a new generation emerged that preferred large, impersonal church systems that enabled mass attendance but not disciple making.

In Jurassic Park, chaos theorist Dr. Malcolm observed that, often, innovation in form overtakes sustainability in function, remarking, “Your scientists were so preoccupied with whether or not they could, they didn’t stop to think if they should.” Ever the realist, Malcolm also quipped, “Change is like death. You don’t know what it looks like until you’re standing at the gates.” Proven by church history, what was produced from this shifting of gears was a church that exhibited, according to Jim Packard, “a faith 3,000 miles wide, but 1 inch deep.”

Science only establishes the veracity of a theory after experimentation demonstrates it to be reproducible and predictable. Statistics demonstrate that our “scientific theory” of church planting based on results no longer produces the results from the church growth movement of the ’80s and ’90s. In any scientific experiment the environmental conditions must be right, and what worked during the age of modernism petered out over the advent of postmodernism.

Without first-century practices, we will never witness first-century results. In modern times, church planting practices have largely been calibrated to the metrics of the church growth movement, and the mission of the church is in dire need of reformation. The dictionary defines “reformation” as “to shape again.” It is a return to the principles established when the revolution first happened. In ages past, there have been periods of reformation when some of the apostolic roles revived and the methods of the early church re-emerged.

God raised up dreamers like Zinzendorf, Wesley, and others who embodied the spirit of innovation Thomas Edison had displayed as he invented the light bulb after he repeatedly exhorted his crew, “There’s a better way, boys, find it!” The need for a reformation in mission has been consistently noted by missionaries who’ve returned from the field after many years immersed in it.

Roland Allen, an Anglican missionary to China, returned home to England and published his groundbreaking work Missionary Methods: St. Paul’s or Ours? Over one hundred years later, the book remains in print, appreciated as a standard missionary text by today’s leading missiologists. Allen believed that we in the church had “shut our eyes to the profound teaching and practical wisdom of the Pauline method.”

While many are careful to ensure orthodoxy in accordance with the doctrinal message of Paul, few are concerned with the actual practices Paul modeled in his missional orthopraxis that was born out of his theology. Lesslie Newbigin, another returning missionary, sought to connect the two.

Missionaries like Allen, Newbigin, and others returned to the West as changed individuals but, more important, as individuals convinced that the church needed to change— specifically, to re- embrace the principles of the first century. When I wrote my first book, Church Zero, I quickly realized, through the help of my editor, that I was not alone among those who returned from the field convinced that the church’s only way to advance again was to return to New Testament principles.

My editor had also worked on Jim Peterson’s book Church Without Walls thirty years earlier and told me that reading my book was like experiencing editorial déjà- u. We were mission practitioners, and we returned to the West with the same message: The church must reform and recover its first-century revolutionary principles of mission. Only then can we advance again, instead of retreating.