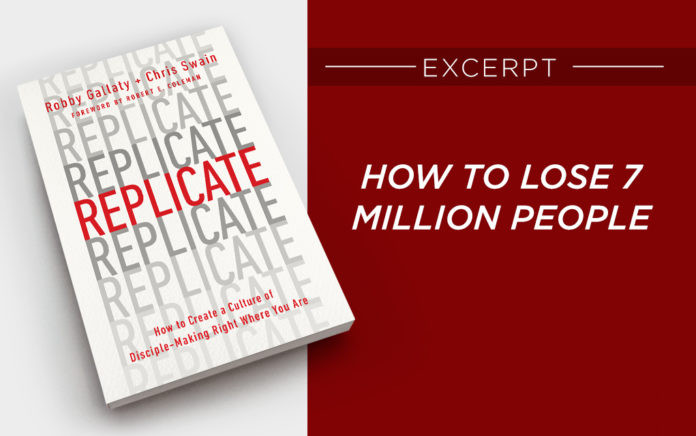 How do you lose 7 million people? That was the question the world’s largest Protestant denomination, Southern Baptists, asked themselves at their annual convention in 2018. After two years of leading a team of pastors and ministry leaders who made up a disciple-making task force, I (Robby) couldn’t believe our findings. As shocking as it […]

How do you lose 7 million people?

That was the question the world’s largest Protestant denomination, Southern Baptists, asked themselves at their annual convention in 2018. After two years of leading a team of pastors and ministry leaders who made up a disciple-making task force, I (Robby) couldn’t believe our findings. As shocking as it is, you may have noticed a similar trend in your church regardless of denominational affiliation. Before we can formulate a plan of action, we must face reality. Facts are our friends, but we have to decide whether we are going to ignore them, reject them or accept them.

We discovered the missing 7 million people near the end of our evaluation. After examining a report that compared baptisms to church attendance numbers over 20 years (see the chart below), we discovered something as astounding as it was heartbreaking. In 1996, 5,224,000 people attended a worship service at an SBC church. Over the next 20 years, roughly 46,000 churches baptized 7 million people. One would expect church attendance to grow by roughly the same amount. You could rationally reduce the number by about 3 million after you factor in mortality rate and family transitions. Did the weekly attendance of churchgoing people increase to 8 or 9 million? Not even close.

Shockingly, rather than adding people to the fold, SBC churches declined. Weekly attendance dropped by 24,000 people. Before you think we’re throwing stones at the Southern Baptist Convention, please know: We merely want to sound the alarm. It’s time we stop pretending there isn’t a problem in churches today. While we are reaching people, we are struggling to keep them in church. 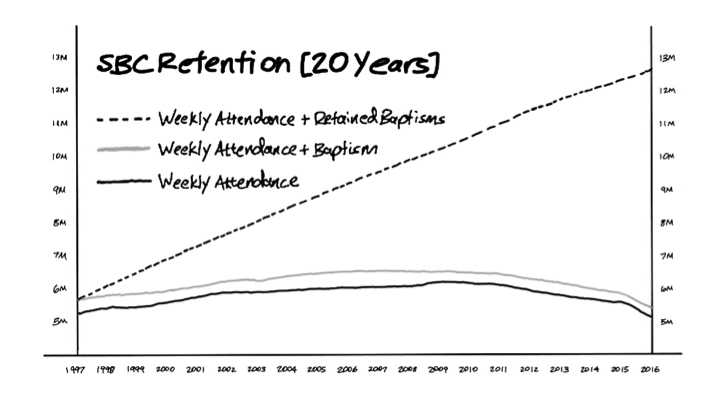 The diagram above offers insight into SBC churches; however, trends suggest this is not an issue isolated to Southern Baptists alone. The weekly attendance, if those that were baptized were retained during these years (represented by the dotted line), would have yielded exponential growth. Churches have been celebrating baptisms but have been ineffective at retaining new converts or new guests. Attendees and members are streaming out the back doors as fast they come into the front doors—and often even quicker. While retention will never be 100%, something is drastically wrong when the church is not retaining those who have made decisions to follow Christ.

Baptisms shouldn’t be minimized or glossed over. We should celebrate every single time a person steps out in baptism and shows the body of Christ outwardly what God is doing inwardly. However, baptism is not the finish line of a relationship with Christ. It’s the starting line of a lifelong journey toward God.

From Outreach Magazine  How to Make Your Sermon Stick Past Sunday

The primary challenge to lackluster commitment to church attendance is the changing culture of our day. Thirty years ago, Americans who self-identified as Christians went to church on Sunday mornings. I remember my parents waking me up every week for service. Although both were unbelievers at the time, we rarely missed church. Those days are long gone. Generis, a church consulting company, surveyed churchgoers to determine how often they attend monthly. In the year 2000, the average church member made it to church 3.2 times a month. Just 17 years later, that number dropped to 1.8 times. Unfortunately, this trend is expected to continue in the future.

Results like these can be heartbreaking and hopeful at the same time. People who identify as members of your church likely only attend about half the time—half as often as they did two decades ago. But this means pastors who thought their church was declining may actually be plateaued or stable since the same people come less often.

Even so, what’s the solution for steering away from this inevitable cliff? Discipleship. By encouraging believers to pursue discipling relationships that are accountable, meaningful and transparent, our churches will see fewer people leave and more people stay and serve. Taking a look back at the early church will help us understand how this can happen.

The first-century church was founded on relationships that moved people beyond conversion into community. In Acts 2, the disciples were scrambling to connect baptized believers into discipling relationships that would continue after they exited the baptismal pools outside the temple. Contrary to what we see today in many churches, where salvation is essential and discipleship is optional, the first-century Christians took Jesus’ commission seriously.

The apostles followed the pattern they’d watched Jesus demonstrate in the years before his death and resurrection. What they’d seen him do, they now attempted to emulate knowing that’s what he expected from them. We know Jesus’ method of making disciples worked because we are disciples today as a result of his disciples following his example. We must compare our current disciple-making practices against his model for ministry.

We can do this by evaluating our current context. Every ministry leader must ask themselves and those they lead two questions:

1. Do we have a process for making disciples—moving new believers toward biblical maturity in Christ?
2. Is it working?

Your answers to these questions will help you diagnose the state of your disciple-making process (or lack thereof). You may find you have a process to grow attendance, build membership and generate decisions without a specific plan to disciple your people. And even if you do have a process for making disciples, you may find it is not working the way you hoped it would. As we examine the problem with disciple making over the next few chapters, ask yourself the questions above. We can’t go back and reconnect the millions of people we’ve lost, but we can change our model to impact the millions to come more effectively. I pray that our churches will embrace a model of making disciples that Jesus demonstrated for the church. I pray that as you read this book, you will learn from our mistakes and successes as you make key adjustments to become a healthy church.

Excerpt taken from Replicate: How to Create a Culture of Disciple-Making Right Where You Are by Robby Gallaty and Chris Swain (©2020). Published by Moody Publishers. Used with permission.