Home Resources Books Empowering the People, Not One Pastor 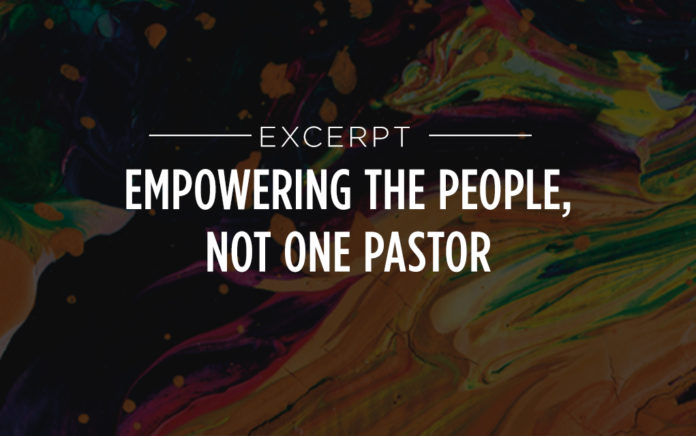 Discipleship is more powerful than a single, charismatic leader.

Excerpted From
The Passion Generation
By Grant Skeldon

I’ve had the privilege of traveling to Israel three times now. It is definitely one of my favorite places on earth. It’s such a powerful experience to see the land where Jesus walked and talked and changed the world. It brings the Bible to life in so many ways, and the Jewish culture is so rich. You don’t read the Bible the same after you’ve been to Israel.

In the garden of Gethsemane, I had a particularly powerful experience. As I was standing there taking it in, I noticed a group from Thailand. Then I spotted a group from Uganda. Then I saw a group from Australia. I thought, Man, people from all over the world are coming to see where my God, Jesus, changed everything.

That’s when it hit me.

But his disciples did.

The great thing about discipleship is that when we start making disciples, we stop relying on the church to feed us. Instead we start relying on the church to launch us. We move away from being a mere member and turn toward being devoted owners. We move from an audience mentality to an army mentality. This is not only what millennials want; it’s what they need. It’s what we all need.

The irony is that the business world is doing a better job at this than the church is. Here’s what I mean.

Do you know what car company has more cars on a global scale than any other? More cars across the world than Ford?

More cars across the world than Volkswagon?

More cars across the world than Toyota?

That company would be Uber.

Do you know what company rents more property globally than any other hotel chain?

That company would be Airbnb.

These companies are benefiting from the perks of discipleship and multiplication. They haven’t just gained an audience of fans. They’ve raised an army of owners and have thus decentralized leadership. What’s beautiful about decentralized leadership structures is that they’re not dependent on their charismatic leader for survival. It’s the devoted contributors who are the real heart and soul of the operation.

Uber and Airbnb are household names that came out of nowhere and completely changed the cab and hotel game. But can you name their CEOs? I doubt it! I bet even fewer of us know that the original CEO of Uber was recently fired for some pretty awful behavior. Meanwhile, what’s happened to the company? It’s continued its revolutionary disruption of the transportation industry. Why? Because it’s not about one person.

It reminds me of what Jesus said to his disciples: “When I leave, you will do greater things” (John 14:12, my wording). This isn’t often the case in the church. How many well-known pastors have stepped down from their church to suddenly find their congregation in shambles?

From Outreach Magazine  Why We Have Reason to Hope for Reconciliation

This is how it usually goes down: A charismatic leader plants a church. The church grows rapidly alongside the reputation of the pastor. Before too long, the pastor is a nationally known writer or speaker who attracts congregants from all over the country—sometimes even from all over the world.

Then the pastor, for whatever reason, leaves the church. It could be a scandal or that it’s simply time for him to retire. Regardless of whether the pastor leaves under a cloud of suspicion or departs with trumpets sounding his praise, the results are often the same.

The church splits into different camps. Satellite campuses begin to struggle. The overall attendance shrinks. Resources plummet. And you know what happens from there: Church morale is gone and some of the satellite campuses have no choice but to shut their doors and close the operation. The pain and carnage are far flung and widely felt.

This is not the model Jesus gave us for church. He gave us a model that lasts.

A charismatic leader is good, but discipleship is great. One has a shelf life. The other is timeless.

Is it possible that we’re celebrating the wrong gift in the church? Everyone wants to be a great communicator. But few want to be great disciple makers. Let us never forget that after only three years, Jesus’ model of ministry went on to grow without him.