Home Resources Books Hope for Those Tempted by Same-Sex Attraction 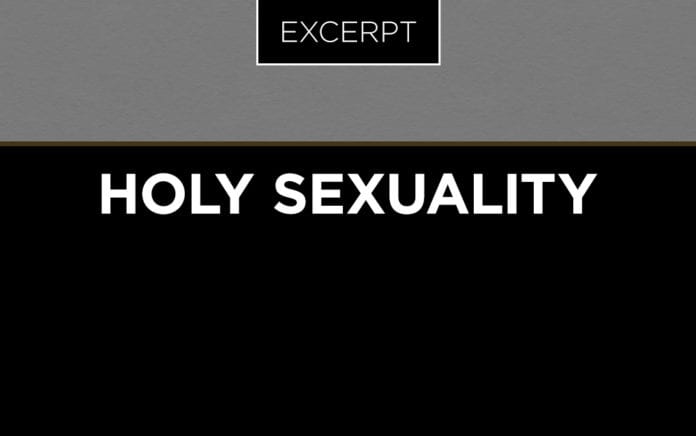 There is significant encouragement in Scripture for those who struggle with same-sex attraction.

Excerpted From
Holy Sexuality and the Gospel
By Christopher Yuan

Tempted in Every Respect

The reality of temptation is found throughout the pages of God’s grand story. In Genesis 3, the cunning serpent successfully tempted Adam and Eve to rebel against God. In the New Testament, we see Satan tempting Jesus in the wilderness. But unlike the first Adam, the second Adam obeyed God perfectly, fully doing the will of God (Matt. 4:1–11; Mark 1:12–13; Luke 4:1–13).

The writer of Hebrews speaks of the real temptations in the life of Jesus: “For we do not have a high priest who is unable to sympathize with our weaknesses, but one who in every respect has been tempted as we are, yet without sin” (Heb. 4:15). Here in this verse, “our weaknesses” refers to our moral frailty and propensity to sin.

Yet Jesus’s sympathy for our weaknesses goes beyond a mere theoretical understanding. He offers actual assistance when we’re tempted. “For because he himself has suffered when tempted, he is able to help those who are being tempted” (Heb. 2:18). The Son of God’s sympathy derives from his full participation in humanity and his exposure to the same experiences as the rest of us.

But this doesn’t mean Jesus needed to sin in order to sympathize. As the apostle John writes, “You know that he appeared in order to take away sins, and in him there is no sin” (1 John 3:5, emphasis added). As God, Jesus did not sin and in fact is incapable of sinning (this is called impeccability). Therefore, the temptations of Jesus were not sinful. But then how can he sympathize with our temptations?

Jesus’s inability to sin does not diminish in any way the reality of his real and intense struggle with temptation. In fact, his sinlessness in the midst of temptation makes him the ultimate example of struggling—because he never succumbed. Nineteenth-century British theologian B. F. Westcott provides the most lucid explanation of Christ’s sympathy:

“The power of sympathy lies not in the mere capacity for feeling, but in the lessons of experience. And again, sympathy with the sinner in his trial does not depend on the experience of sin but on the experience of the strength of the temptation to sin which only the sinless can know in its full intensity. He who falls yields before the last strain.”

Jesus struggled with temptation infinitely more than any sinful man or woman, yet he was victorious. The Son of Man was tempted in every respect; he fully and perfectly struggled, bringing his endurance to completion. This should be an extraordinary encouragement for all—particularly those of us who struggle with same-sex attraction.

From Outreach Magazine  Can’t Nothing Bring Me Down

Yes, our Lord has struggled much more than we have. As a matter of fact, because we give in and yield to temptation and sin, we comprehend the struggle only in part. Jesus alone has struggled wholly, as he withstood heroically to the end. What an amazing Savior and friend we have in Jesus!

A Way of Escape

Paul reminds us in 1 Corinthians 10 of the tragic example of the Israelites in the wilderness and sternly warns us to flee idolatry and sexual immorality. In the midst of these strong words, he also provides an encouraging and empowering promise: “No temptation has overtaken you that is not common to man. God is faithful, and he will not let you be tempted beyond your ability, but with the temptation he will also provide the way of escape, that you may be able to endure it” (v. 13).

The Greek verb peirazo can be translated as “try, test, trap or tempt.” The difference between a test and a temptation lies in the motivation of the tester. For example, God can allow believers to face a trial to test and sharpen their character (John 6:6). On the other hand, Satan tempts people to sin and disobey God (1 Cor. 7:5).

A test or temptation can build us up or tear us down. Puritan John Owen explains it best: “Temptation is like a knife, that may either cut the meat or the throat of a man; it may be his food or his poison, his exercise or his destruction.”

Sometimes it’s obvious whether the test or temptation arises from God, from Satan, from another, or from within. Yet in other instances, the word peirazo can generally refer to both test and temptation without excluding either—as it does in 1 Corinthians 10:13.

Paul is reminding us that our trials and temptations aren’t exceptional, unique or even unbearable. Satan wants us to think that no one else can understand our struggles. This is a lie. One of the devil’s best weapons is isolation. The truth is that we’re never alone in our fight.

The comfort of Paul’s message in this verse finds its source in three words: “God is faithful.” Our confidence in the midst of temptation lies not in our own finite abilities but in a faithful and powerful God who never encounters anything he cannot resolve. God provides assurance that each temptation will be in proportion to the capability of the tempted, along with the promise of a “way of escape.”

Please catch what Paul is saying here. Superhuman capacity or even great faith is not required to endure temptation. Even the weakest of believers has an escape hatch. This is a comforting salve for the feeble and even for those with little faith. Every temptation always falls within the ability of the one tempted to persevere. The true test may not be in our ability to endure temptation but in the depth of our belief in the sovereignty of Almighty God.

Unfortunately, a serious fallacy runs rampant in our churches that a good Christian is somehow immune to temptation. This simply isn’t accurate. Scripture doesn’t promise that faith in Jesus results in an eradication of temptations. If Jesus himself was tempted, what makes us think we won’t be? The Christian life doesn’t mean you won’t be tempted; it means you’ll have the Spirit-wrought ability to be holy even in the midst of temptations. What matters most is not that we are tempted but how we respond to temptation.

If you’re wracked with guilt for simply having same-sex sexual temptations, hear these words from John Owen: “It is impossible that we should be so freed from temptation as not to be at all tempted.” Being tempted doesn’t mean you have little faith because it’s quite ordinary and human to be tempted. The truth of the matter is that temptations are not sinful.

However, we must be careful not to take temptation lightly. It is not sin per se, but it also isn’t benign, as it quickly leads to sin. Therefore, we should always be vigilant in our response to it. No temptation to sin is trivial or inconsequential, and that’s indeed true for same-sex temptations.

James provides a sober warning that temptation is tantalizing: “Each person is tempted when he is lured and enticed by his own desire. Then desire when it has conceived gives birth to sin, and sin when it is fully grown brings forth death” (James 1:14–15). Although this is not meant to be a step-by-step timeline for sin and temptation, in verse 13 James explains that God does not tempt us to sin and warns us that temptation leads to sin, which leads to death.

There is nothing innocent or sanctifiable about same-sex temptations. They are a stark reality of the distorting effects of original sin. And everyone’s sexuality has been distorted by the Fall. Therefore, resisting, fighting, and fleeing temptations must be a vital and normal aspect of a mature Christian’s life.

But rest assured: Jesus is able to sympathize and help. And God is faithful, apportioning temptation according to our ability to resist while always providing a way out. In our struggles, we are never alone.