Home Resources Books How Suffering Draws Us Together 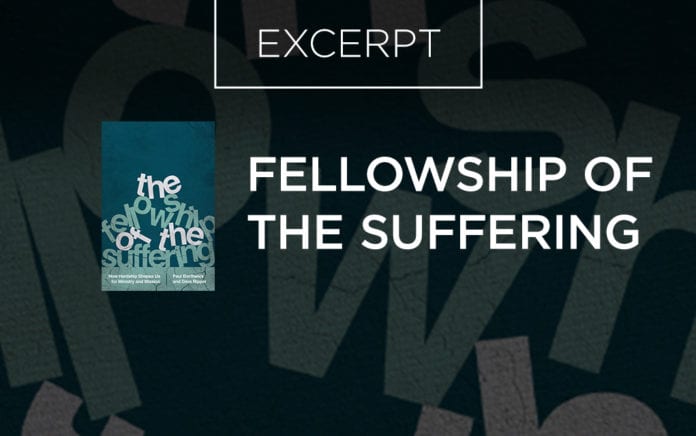 The unique bonds that are forged through shared suffering give us the strength to bear its weight together.

When I (Paul) was told by my doctors that I had Type 1 diabetes, I knew it meant that (barring miraculous healing), I was looking at a lifetime regimen of daily blood tests, insulin shots and food control. We called our long-time friend Carolyn. She and her husband, Donald, had gone to university with me, and we had served our church’s youth ministry together. I had performed their wedding. But above all, I called Carolyn because I knew that she had been living with Type 1 diabetes since she was eight years old. She’d know what we were going through. She made time to see us, explained everything from blood tests to low blood sugars to some what-to-expect predictions concerning why diabetics should probably not eat pizza! We were together with Carolyn and Donald in a fellowship of the suffering, and she was comforting us with the comfort she had received from God.

Several months after starting on the regimen of shots, tests and a carbohydrate-managed diet, I saw Christie telling people about the challenges of managing the diabetes lifestyle. Referring to our “old life” versus our “new life,” I overheard her say, “All that changed when we got diabetes.” I almost broke into tears. She had willingly entered into solidarity with me—even though she didn’t have the disease.

Speaking of Christie, I’ve watched her minister with compassion to people who have pain in their family relationships, because Christie is allowing God to use her pain to care for others. She’s listened with compassionate understanding to one Christian brother as he described the pain of not being able to help his mentally ill child; Christie understands because she grew up with a mentally ill brother. She’s empathized with a high school student who has just learned that her mother is an alcoholic; Christie was a teenager when she learned her mother was an alcoholic.

The basis of this book stems from this idea of fellowship in suffering. When I (Paul) first heard Dave preach, I could tell there was a depth in him that only suffering could have forged. Even though he was chronologically relatively young, he had the testimony of someone who knew the potential of an inescapable prison.

The couple we visited in Mozambique later experienced a devastating loss when their six-year-old daughter died from cerebral malaria. We thought they would return home overwhelmed by the loss. They persevered and stayed on to serve. When I inquired as to where they found the strength, they shared that when they buried their daughter, they were surrounded by four Mozambican pastors—all had also buried at least one of their own children.

Suffering forges solidarity with others like nothing else can. There is no community on earth like the fellowship of the suffering.