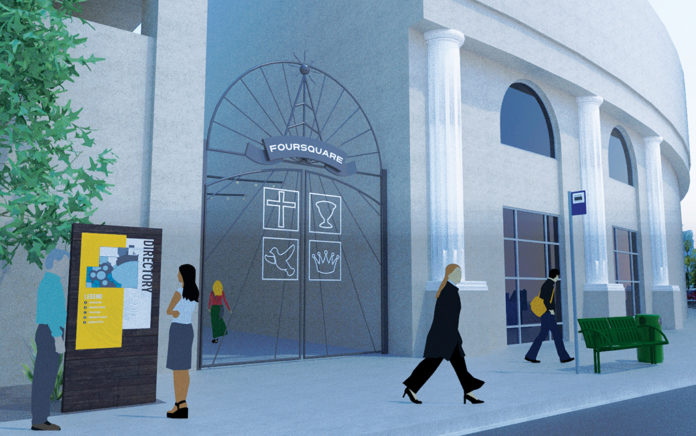 Both Echo Park and Foursquare have experienced not just a revitalization, but reconciliation and restoration.

Of all the movies that Hollywood has made that are set in Los Angeles, Chinatown is the essential LA story. An iconic scene in the film that captured the Garden of Eden-like quality marketed to the world was filmed on Echo Park Lake, just off Sunset Boulevard, in the Echo Park neighborhood.

The anchor tenant of Echo Park is Angelus Temple, built in 1923 by Aimee Semple McPherson, who also was a radio evangelist and the founder of The Foursquare Church. She filled the 5,300-seat church seven days a week, three times a day, making it the first megachurch. By 1927, 100 Foursquare churches had been established, and the International Church of the Foursquare Gospel was created.

Sister Aimee, as she was known, broke gender, cultural and media barriers. Back then it was rare for a woman to be divorced (she was three times) and rarer still to be a female pastor. She was the first woman to own a major radio station; she also started a monthly magazine, a weekly newspaper and an incorporated film company.

By the end of World War II, Aimee had died of an accidental drug overdose, and Echo Park was on a steady decline, a sad trend that continued all the way through the 80s. Yet The Foursquare Church and Angelus Temple remained, and at times offered residents more assistance than the city of Los Angeles could. It’s estimated that Aimee fed 1.5 million people in her time at Angelus Temple. With land cheap, the church continued to buy property in Echo Park, including the Citibank building where the church’s headquarters is today.

Echo Park was a victim of urban neglect. Bodies had been found in Echo Lake. Houses literally were collapsing, historic monuments were demolished by the city, graffiti was everywhere and crime was frequent. But activists came in to preserve the historical architecture and natural, green spaces. By the mid-90s, civic groups started to focus on public safety and youth activities. In 1994, Matthew Barnett opened the Dream Center in Echo Park, a place for homeless and impoverished families, human trafficking victims, former inmates and those fighting addictions. Nearly 500 people can be housed at the Dream Center where they can receive rehabilitation. In 2001, Barnett became the senior pastor of Angelus Temple.

In the new century, the revitalization of Echo Park has continued, and the culture is shifting to a trendy, upscale destination. Millennials and hipsters are moving in because of the affordable houses, authentic lifestyle and big city amenities. Recent data has shown an increase in income and education levels in the area. In 2015, The Foursquare Church made a bold move by selling 14 of their properties in Echo Park, keeping only Angelus Temple, the Dream Center and the Citibank building. They had decided it was time to use more of their assets for the mission of the church, and that it was time to revitalize their own buildings.

When they called me to master plan the property and to design their new global headquarters, they presented a unique design challenge. The church had strategically decided to lease out the upper floors of the Citibank building in order to generate revenue for missions work, to develop a new global headquarters and to create a satellite auditorium in the ground floor of a parking structure, to be accessed by an alley.

From Outreach Magazine  Should Your Church Start a Business?

With that in mind, we gave the alley a Hollywood makeover. We designed a KSFG Studios entry arch to the pedestrian paseo to emulate the original broadcast ministry. Subtle Hollywood glam elements have been incorporated into the creative suites, environmental graphics and wayfinding of the new Foursquare global headquarters.

Both Echo Park and Foursquare have experienced not just a revitalization, but reconciliation and restoration. In a recent message, Glenn Burris, president of The Foursquare Church, reminded members of what Paul wrote to the Corinthian church: “God gave us the ministry of reconciliation,” putting things back together that have been ruined, broken and hurt. “Often times we see brokenness as something bad; and yet God brings wholeness and healing to that story, and then it becomes our story. And our story is God’s story,” he said.

Sister Aimee’s story is God’s story, too, and it’s been redeemed—just like my personal story and yours. Today, there are 85,000 Foursquare churches around the world with almost 9,000,000 members. And it all started in a little place called Echo Park.