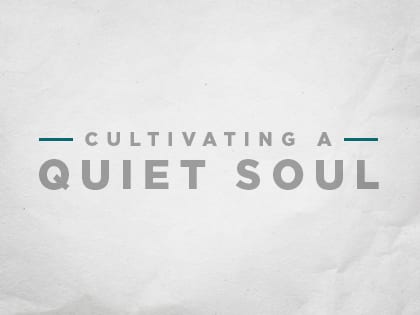 “I don’t want to get to the end of my life and be known as a busy person.”

Do you have anybody truly loud in your life? I don’t mean someone who can just create volume on occasion; I mean a person who is always at high volume.

Chelsea has to deal with this every day of her life because I am a loud person. I think our kids have taken it to a whole new level, though. They talk loud, they laugh loud, they play loud. Chelsea, however, was not raised in a loud family, nor is it in her nature to be loud, so she has had to develop loudness in the interest of self-defense. In our family, it’s survival of the loudest.

I have a couple of friends who are louder than me. They are actually two of my favorite people in the world: Pastor Jude Fouquier, my pastor since I was eight years old, and Chad Veach, who recently started a church in Los Angeles. When I am in a conversation and happen to notice either Pastor Jude or Chad approaching, I automatically rush to finish what I am saying, because I know they are going to take over the conversation as soon as they get to me. They don’t mean to. It’s just that their exuberance and their decibel level are slightly overwhelming for average humanoids. Loud is who they are, and I love them for it.

This is very much true of Pastor Jude. Pastor Jude cannot whisper. He gets breathy, but he doesn’t whisper. If we are in a meeting together and I try to discreetly whisper a question to him, the entire room hears his response.

One month before Chelsea and I were married, Pastor Jude and I were on a six-hour direct flight from Seattle to New York. We were going to speak at a youth conference together, so we took the same flight.

Chelsea and I were both virgins when we were married. Not that you were curious, but it’s part of the story. This was partly because of our commitment to God and to purity and to each other, and partly because my mom would have killed me had we done anything prior to marriage.

Anyway, in preparation for the wedding night, someone had recommended I read a book called A Celebration of Sex. It is a guide to sex and marriage and sexual fulfillment. It talks in detail about how to make sex great and exciting, and it even addresses the first night.

Pastor Jude knew that. And he decided that it was time to have “the talk.”

I think we were far back in row 38 on Delta Airlines. The problem was, the plane was totally full. Pastor Jude was in the aisle seat, I was in the middle seat, and there was a random soul stuck in 38A.

We sat down and buckled up. We hadn’t even taken off yet when Pastor Jude turned and whisper-shouted, “Hey, so Judah, did you read the book on sex yet?”

I was like, “Pastor Jude, are you serious? Are we doing this right now?”

I looked at the guy in 38A out of the corner of my eye, and I could tell he was wondering if he had heard what he thought he heard.

But Pastor Jude was unaware, undeterred, and uncensored. “So what did you think? If you have any questions, just ask.”

I had no questions, or at least none that I wanted announced to an airplane full of strangers.

So Pastor Jude asked all the questions. “Well, what are your plans for the first night? I recommend you start with a bath. It helps.”

He said, “Oh my gosh, do you think people can hear me?”

I hissed, “Even the pilot can hear you!”

During the entire flight I was unable to face the human who was sharing shoulder space with me. I couldn’t imagine what 38A must be experiencing. When we finally arrived in New York, the poor man was sweating profusely. For six hours, he had not moved. He had not gone to the restroom. He had been trapped. That unsuspecting soul was inundated with more information than he ever bargained for.

Too Loud, Too Fast

But that poor soul isn’t the only one to get an unwanted earful. Have you noticed that we live in a loud culture? We are inundated by noise, by activity, by information. Maybe you aren’t sitting in 38A next to Pastor Jude, but you are still subject to a nonstop barrage of mental and emotional stimuli.

Not only is life loud, but it’s fast. Our world and culture travel at a high velocity. There is so much going on, so much to hear and process. It seems we are all in a rush now.

We talk about slowing down, about shutting out the noise, about finding time to relax and decompress. That’s great in theory, but I’m not sure we can control the volume and velocity of our existence, at least not completely. It’s the world we live in.

Living life with this level of intensity can produce extraordinary internal angst. It can create anxiety, fear, and an overall sense of desperation.

I wonder, even in a fast and furious world, can we cultivate quiet souls? Can we be calm and peaceful and at rest on the inside, even when all around us are chaos and noise?

That thought is so appealing to me. I am all for hard work and being responsible, but I don’t want to get to the end of my life and be known as a busy person. I don’t want that to be the word that comes to mind when my kids and spouse and friends try to describe me after I’m gone. “He was busy. He was a hard worker. He always seemed kind of stressed out, poor guy, but he got a lot done.”

There is value in being productive, of course, but I would rather be known as someone who loved life, loved people, and loved God. Someone who knew how to enjoy each moment and simply be at peace and rest on the inside.

One of the greatest examples in the Bible of a quiet soul is David, the most famous king of Israel. He was a warrior, politician, family man, visionary, musician, and songwriter. If anyone knew what it meant to face constant stress and pressure, it was David.

Yet David’s most lasting legacy is not the empire he built, the enemies he defeated, or the laws he passed. Arguably his greatest legacy and gift are his songs, recorded in the book of Psalms. They are a heartfelt, passionate, authentic expression of his journey with God. And thirty-five hundred years later, his words and emotions still resonate with our souls.

I think this ancient king understood something that our frenetic twenty-first-century culture desperately needs. He knew how to have a quiet soul.

Psalm 131 in particular gives us insight into David’s unique ability to maintain a quiet and restful soul. This psalm is part of a collection of fifteen psalms called the Songs of Ascent. They were traditionally sung by Jewish caravans on their way to Jerusalem to celebrate their annual religious feast. The Songs of Ascent were their road trip playlist.

O Lord, my heart is not lifted up;
my eyes are not raised too high;
I do not occupy myself with things
too great and too marvelous for me.
But I have calmed and quieted my soul,
like a weaned child with its mother;
like a weaned child is my soul within me.
O Israel, hope in the Lord
from this time forth and forevermore.

Notice especially verse 2. David is intentional about having a calm, quiet soul. He values it, he seeks it, and he finds it.

Remember, David was a hero in Israel. He was a celebrity. He was the most influential and affluent person around. He had more power, fame, fortune, and responsibility than most of us could imagine.

Why is that relevant? Because David was a man before his time. He was in this ancient setting, yet he could relate to someone living in our age. He had everything at his fingertips. He didn’t have a cellular device, but he had people who would serve him, do anything for him, and get any information he wanted. He had a fast-paced, loud life.

Yet somehow, even with all his opulence and popularity and fortune and fame, he found a way to quiet his soul. If King David could develop a calm soul in the middle of the craziness and chaos of ruling a kingdom, maybe there is hope for you and me.

I doubt David’s soul was always quiet, by the way. I think he had his moments, just like any one of us. Actually, that is exactly why he wrote about intentionally quieting his soul—he clearly faced the same temptations we do to let our thoughts and emotions get out of control. But in general, he seems to have discovered how to live from a quiet space, a peaceful place on the inside.

Judah Smith is the lead pastor of The City Church in Seattle, Washington. He is know around the United States for his preaching ministry. His fresh, practical, humorous messages demystify the Bible and make Christianity real. He is also the author of The New York Times bestselling book Jesus Is _______.