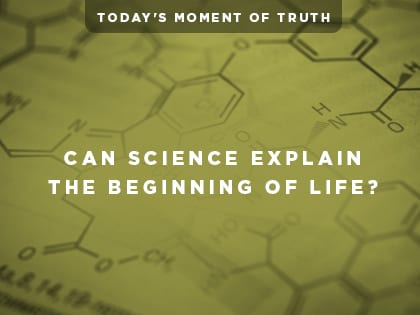 God said, “Let the water teem with living creatures, and let birds fly above the earth across the vault of the sky.” —Genesis 1:20

“Darwin … would not be drawn out on the question of how life got going in the first place,” said physicist Paul Davies in an op-ed piece in the New York Times. “In spite of intensive research, scientists are still very much in the dark about the mechanism that transformed a nonliving chemical soup into a living cell.”

I asked origin-of-life expert Walter Bradley, coauthor of the landmark book The Mystery of Life’s Origin, about the various theories scientists give for how the first living cell could have been naturalistically generated—including random chance, chemical affinity, self-ordering tendencies, seeding from space, deep-sea ocean vents, and using clay to encourage pre-biotic chemicals to assemble. He demonstrated that not one of them can withstand scientific scrutiny.

Many other scientists have reached that same conclusion. “Science doesn’t have the slightest idea how life began,” journalist Gregg Easterbrook wrote about the origin-of-life field. “No generally accepted theory exists, and the steps leading from a barren primordial world to the fragile chemistry of life seem imponderable.”

Bradley not only shares that view, but he said that the mind-boggling difficulties of bridging the yawning gap between non-life and life mean that there may very well be no potential of finding a theory for how life could have arisen spontaneously. That’s why he’s convinced that the “absolutely overwhelming evidence” points toward an intelligence behind life’s creation.

In fact, he said, “I think people who believe that life emerged naturalistically need to have a great deal more faith than people who reasonably infer that there’s an Intelligent Designer.”

Biochemist and spiritual skeptic Francis Crick, who shared the Nobel Prize for discovering the molecular structure of DNA, acknowledged, “An honest man, armed with all the knowledge available to us now, could only state that in some sense, the origin of life appears at the moment to be almost a miracle, so many are the conditions which would have had to have been satisfied to get it going.”

“If there isn’t a natural explanation and there doesn’t seem to be the potential of finding one, then I believe it’s appropriate to look at a supernatural explanation,” said Bradley. “I think that’s the most reasonable inference based on the evidence.”

I think the author of the book of Genesis would agree.

People go to great lengths to find answers other than the ones given in the Bible. But increasingly Jesus is proven right when he says to the Father in John 17:17, “Your word is truth.”