Home Resources What Does It Mean to Be a Peacemaker? 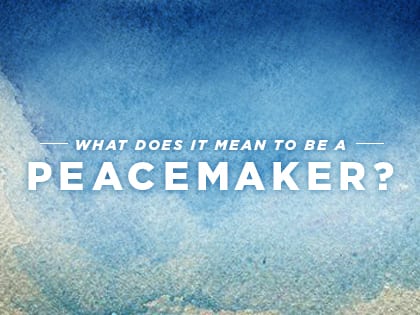 Jerry Bridges: “One of the greatest examples of humility in action is to act as a peacemaker in conflict involving ourselves.”

“Blessed are the peacemakers, for they shall be called sons of God” (Matt. 5:9).

Conflict, and the resultant need for peacemaking, goes as far back in human history as Cain, son of Adam and Eve, who killed his brother Abel. Ever since then there has been conflict between tribes and nations, and in our own time between unions and management, students and school administrations—and, sad to say, too often between factions in churches or denominations, or even within families.

So today there is a great need for people who can play the role of peacemaker, whether between nations, or labor and management, or students and administrations. There is even a fine organization called Peacemaker Ministries which seeks to mediate peace within churches or families. We should be grateful for all the people who seek to be peacemakers at various levels of society.

But there is no doubt that Jesus did not have any of these people in mind when He said, “Blessed are the peacemakers.” He was addressing His words to people who were powerless to play the role of peacemaker on a national or international scale. He did not even have in mind people who are gifted and trained to bring peace within churches or families, as important as that type of ministry is. Rather, as in all these Beatitudes, He is speaking of something that should have been true of all His hearers at that time, and should be true of all believers today.

Jesus is speaking of making peace when we ourselves are involved in conflict with others. So to explore this Beatitude, we need to go to the root cause of conflict among ourselves.

As you read through the letters of the New Testament, you will notice how often conflict is addressed. In Galatians 5:15 Paul warns, “But if you bite and devour one another, watch out that you are not consumed by one another.” When he writes about the works of the flesh, along with flagrant sins such as immorality he mentions such sins as enmity, strife, jealousy, anger, and the like (Galatians 5:19-21). When James asks, “What causes quarrels and what causes fights among you?” (James 4:1), he is writing in the overall context of a discussion of the razor-sharp tongue (James 3:6–4:2). In the Old Testament, Solomon addresses the misuse of the tongue when he writes, “A soft answer turns away wrath, but a harsh word stirs up anger” (Proverbs 15:1).

It is often the sinful use of our tongues that causes conflict. But the tongue is only an instrument. The real problem is our heart, for Jesus said, “For out of the abundance of the heart the mouth speaks” (Matthew 12:34). It is because of pride, anger, jealousy, and the like in our hearts that we speak cutting and hurtful words to one another. And it is because we nurse hurts from other people and harbor resentment in our hearts that we engage in verbal conflict.

In order to even ask those questions, we have to admit we have those attitudes. But because we know they are sinful, we tend to live in denial that we even have them.

We need to deal with the sinful passions of our own hearts before we can deal with conflict of any kind with others. So where do we start? One way would be to go back over each of the character traits of the previous Beatitudes, and prayerfully and carefully ask ourselves how we compare with each of the traits. Am I poor in spirit? Do I mourn over my sin? Am I truly meek before God and with respect to other people? Do I truly hunger and thirst after righteousness, not only in my conduct, but also in my heart? Am I merciful toward others who sin against me because I am aware of how merciful God has been to me? Do I seek a singleness of heart toward God based on the fact that I am no longer my own, but rather am Christ’s possession? And if I am truly His possession, then does it really matter how I am treated? Because that is His business.

If we ask ourselves these questions with complete honesty, we should end up with a deep sense of humility. Only then are we in a position of becoming peacemakers.