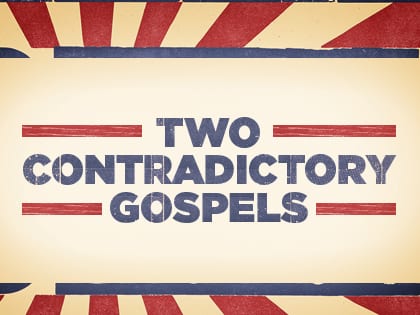 Onward: Engaging the Culture Without Losing the Gospel
By Russell Moore (B&H, 2015)

A 2015 OUTREACH RESOURCE OF THE YEAR
Category: Culture

On a shelf near me right now stands one of my favorite pictures. It’s a black-and-white photograph of a line of civil rights workers, protesting in the heat of the Jim Crow era. They are standing shoulder-to-shoulder, all of them bearing the same sign. Placarded in large letters on the sign are the words, “I Am a Man.” I love this picture for its simplicity, and for the courage and truth telling represented there. At the same time, the picture makes me tremble that such things ever needed, and still need, to be said.

I didn’t grow up in the time of segregation. By the time I was born, the schools were integrated, and the most significant civil rights and voting rights legislation had been implemented. But I remember Sunday school.

Like most churches in my tradition, at the time, we children would go to church each week bearing little envelopes with our offerings for world missions. One week, when I was perhaps four or five, I was fidgeting through the Bible lesson, and pulled a quarter out of my envelope. Somehow it ended up in my mouth. The lady who was teaching us that day noticed, and, I’m sure, didn’t want me to choke on the coin, so she tried to motivate me never to do something like that again. She said, in a memory that stays with me to this day, “That’s filthy; why, you don’t know whether a black man may have held that coin.”

Now, this lady was not a Klansman. She probably didn’t think of herself as a proponent of white supremacy. The point is that she didn’t think at all. She didn’t see that her statement was precisely the culture the civil rights movement confronted: the idea that her African-American neighbors were unclean, were something not quite human.

It might be my imagination playing tricks on me, but it seems to me that she followed up that statement by gathering the children together to sing “Jesus Loves the Little Children.” Her words, moments before, probably didn’t sound to her, or to us, contradictory to our singing, “Red and yellow, black and white, they are precious in his sight; Jesus loves the little children of the world.” Jesus loves black people; that’s why we brought our dimes and quarters to send missionaries to Africa. But what they touched might make us unclean. She couldn’t see that these were two very different gospels, and that only one of them could be true. I suppose if you had asked her why she was perpetuating bigotry in her class, she might have said you were being “political.” Her job was to teach children the Bible, and to motivate them to share the gospel around the world. She might have dismissed the whole conversation as a matter of social policy, a diversion from our mission. She would have been wrong.

The threats to human dignity are with us always, from racism and slavery to abortion and torture. Over the past half-century, many Christians have mobilized around the pro-life movement in response to the legalization of abortion by Supreme Court action in 1973. The pro-life movement, however, was not a merely reactionary posture, fueled by culture wars. Abortion was not simply a “wedge issue” to distinguish social conservatives from the sexual revolution. The pro-life movement was connected intrinsically to the church’s witness to human dignity going back all the way to the church’s emergence in Jerusalem in the first century. Christians who object to the violence of abortion are in continuity with a long tradition of Christian teaching against the oppression of the vulnerable and against the disposability of human life. The church, made up of fallen sinners, has done so imperfectly, and some bearing the name of Christ have sometimes stood on the wrong side of human dignity, but the great movements against bloodshed and slavery and exploitation have often come with the prophetic, moral grounding of the gospel of Jesus Christ.

Moreover, the pro-life movement, like the abolitionist and civil rights movements, is much more than a political movement (though it is nothing less). The pro-life movement has, of all the recent Christian forays into public engagement, been the most holistic in its work, seeing the need for laws to protect unborn children but also cultural witness to persuade women not to abort, men not to abandon their children, and society to see the goodness and value of every person, even when shielded from sight in the womb or when sick or diseased or developmentally challenged. With that has come also ministry, rooted in churches and in community organizations, to equip mothers to choose life for their children, often offering job-training, counseling, and shelter from situations of domestic abuse. Seeing the horror of abortion jolted many churches toward our James 1:27 duty to care for widows and orphans in their distress, as the church mobilizes for adoption of children who need families, foster care for those in the system in need of support, and the welcoming of pregnant women in crisis. At the same time, the abortion issue has awakened in many a Christian conscience to hear the cries of the “least of these,” whether in or out of the womb—leading to justice and mercy ministries toward the poor, the homeless, the trafficked, the addicted. While a pro-life, whole-life witness has a long way to go yet, the church does not live up to its caricature as those who, in the words of one critic, believe that life “begins at conception and ends at birth.”