Home Books Church History Is Your Church an Oak or a Petunia? 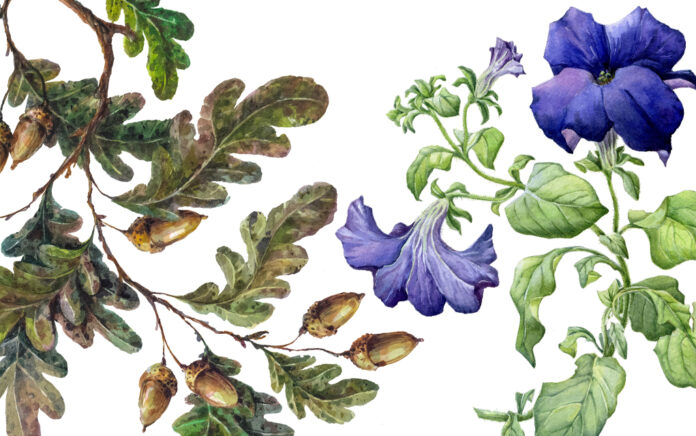 Not long ago, I compared the list of growing, influential churches in the United States over a timespan of just under half a century (46 years).

I’m spending time in the United Kingdom on a research and writing sabbatical, and teaching at the University of Oxford. Oxford is a beautiful school with a long history. It is so old that, while we can be certain students have been taught here for over 900 years, no one is certain of its precise founding. That is, well, really old. And while the British, like all Europeans, are used to going about their lives amidst structures that have endured for centuries, for me as an American … places like Oxford are special.

So much of this beautiful country has endured centuries upon centuries of some of Western history’s greatest moments and darkest trials. Some of the first students who studied at Oxford likely had relatives who were alive during the Battle of Stamford Bridge, which brought about the symbolic end of the Viking Age. And yet places like Oxford remain vital today.

So naturally, I would turn my thoughts in this column toward the history of the largest and fastest-growing churches in America, and why some of them remain resilient through decades of storms while others arrive on the scene with great fanfare only to disappear.

For over 1,400 years, Canterbury Cathedral has been a place of worship. Long before Geoffrey Chaucer began writing his Canterbury Tales in 1387, Benedictines worshiped at what is today the mother church of the worldwide Anglican Communion. The pastoral leadership over Canterbury has changed countless hands, yet the worship of Jesus continues.

I have to wonder why that is. What is it that causes any given local church to be built to last, to be more like an oak––for example, the over 1,000-year-old Bowthorpe Oak in England––and less like an annual flower such as the petunia, which must be planted each year. What causes some congregations to be impervious to the test of time while others spring up and wither in a single generation or two?

Not long ago, I compared the list of growing, influential churches in the United States over a timespan of just under half a century (46 years). First, I looked at the list of the 100 largest Sunday schools compiled by my friend (and mentor, years ago) Elmer Towns and published in Christian Life Magazine in 1974. Here are a few interesting details.

Whether or not a church appears among the largest in America is not necessarily a sign of its health. You may have heard it said, “Healthy things grow.” But to that I would say, yeah, but so do tumors and mold. Growth is not automatically a sign of a thriving congregation. But the fact that many of these churches that were once among the largest in the nation have vanished is a startling reminder that, unlike Canterbury, many churches simply do not endure.

When it comes to churches, we need more who resemble enduring oaks and fewer fading flowers.

Many of us have listened to The Rise and Fall of Mars Hill podcast from Christianity Today. It was jarring. Mars Hill came, made fastest-growing and largest lists (including our own), and is gone now. All within less than 20 years.

I preached at Mars Hill on several occasions, in the very pulpit of what was the church of its day—the talk of all evangelicalism. And, in almost an instant, it ceased to exist.

While that church’s history and its problems may seem like an outlier example, it would be a mistake to assume that some of the things that were part of its demise could not impact other churches on today’s largest churches list.

For many pastors, the growth rate, size and reach of their church is too deeply connected to their sense of personal worth and value. For some, their charismatic personalities have grown enormous movements, but have caused their elevation into the spotlight of American Christianity to outpace the development of their character.

While Nikolaus von Zinzendorf once famously stated, “Preach the gospel, die and be forgotten,” some pastors are finding it increasingly difficult to resist the privilege of the influencer status their platform affords them. They end up working tirelessly in an effort to make their mark, almost in an exact contrast to Zinzendorf’s message.

The Marks of an Oak

From Outreach Magazine  In Pursuit of the Good Life

Obviously, I don’t believe there’s anything inherently wrong with a church simply by virtue of its size. I had the privilege of serving for years as interim pastor at the oldest extant megachurch in the world: The Moody Church of Chicago. And while Moody’s founder (and namesake) was widely known, it does not bear the marks of the flash-in-a-pan growth movements we see today. Churches like Moody continue because they place an emphasis on the right things. Churches like Moody are oaks.

The megachurch phenomenon is likely not going away anytime soon. But for these churches to endure like a mighty oak––for churches of any size to endure—they must prioritize the right things. What are marks of churches that continue through the passage of time? In addition to what I believe are the indispensable priorities—a commitment to Scripture and to the spread of the gospel—let me give three additional marks of enduring churches.

These churches know who they are. They both know and are committed to their core beliefs. They understand their heritage and tradition, and hold to the timeless truth found in Holy Scripture. Some of the movements that are on the fastest decline are among those whose doctrinal priorities have eroded over the years.

At the local church level, when a church loses sight of “guard[ing] the deposit” of the faith “that was entrusted” (2 Tim. 1:14) and downplays the significance of sound doctrine, it is easy for Satan to gain a foothold to exploit within the church, down the road.

While many people jump to mainline churches when speaking about shifting doctrinal stances, we can (and should) also be concerned about evangelical churches that, over the last 20 years or so, have often lessened the value of sound theology, thinking that pragmatic concerns would be more important than theological ones. Churches that do not wrestle with protecting the deposit of faith simply cannot endure.

The second mark of an enduring church is one that engages their cultural moment with innovation. In Built to Last, author Jim Collins discovered this characteristic of the 18 companies he studied, but the same thing could be said of churches that last.

Even the visionary companies studied in Collins’ book need to continually remind themselves of the crucial distinction between core and noncore, between what should never change and what should be open for change, between what is truly sacred and what is not.

In their book American Grace, Robert Putnam and David Campbell note three primary types of church innovation that have characterized American Christianity. The first is a new medium, which can refer to a new means by which the gospel is presented in light of a current need or challenge. We witnessed many churches rise to the occasion to innovate new mediums during the COVID-19 stay-at-home orders.

The second type is new organization. This refers to churches finding creative and meaningful ways to adapt structurally to the ministry needs of the moment. We see this in new networks today. The third type of innovation is a new message. This doesn’t mean a new gospel, but rather a renewed commitment to presenting the truth of the gospel in new and compelling ways.

A church given to sound doctrine (point 1) should be the church most able to innovate, because it does so from a sure foundation. Whatever the type innovation may be, churches that can respond to the moment with agility and creativity will stand the test of time.

From Outreach Magazine  Jason Jimenez: A Practical Guide to Discuss Controversial Topics in the Church

No matter how great a pastor is at leading a church, that pastor will not be there a century from now. But if the Lord tarries, their church may be. Much of that depends on how pastors handle one of the most vulnerable times in a church’s life: the transition of its senior leadership from one generation to the next.

Recently, I tweeted a request for examples of successful transitions, and I learned several lessons through the responses I received.

First, many healthy transitions involved mentorship of some sort between the outgoing and incoming pastor––leading up to and even after the transition took place. Several people mentioned that this relationship not only involved private relational investment, but also public affirmation and support from the outgoing pastor.

Second, many of the healthy succession stories––such as that of Pete Scazzero’s transition of New Life Fellowship in Queens, New York, to Rich Villodas––were also internal. The new pastor had been a part of the church staff for enough of a time that when they took over it wasn’t viewed as a new guy coming in.

Third, and related to the first two, many succession stories that were healthy required a long investment of time. In some cases, the successor was chosen years in advance and much effort was taken to move slowly but steadily, often with the help of outside consultants.

By the standard of the rest of the global church, American churches are still relatively young. But if we hope for the labor, sacrifice and sweat equity we put into cultivating vibrant, healthy churches to live beyond us, we have to consider how we are going to build our churches for generational endurance. It is my sincerest desire that we would cultivate our churches as oak trees, beside streams of water. That they would yield their fruit in season and their leaves would not wither (Ps. 1:3). That they would endure until Christ himself returns to establish his kingdom.