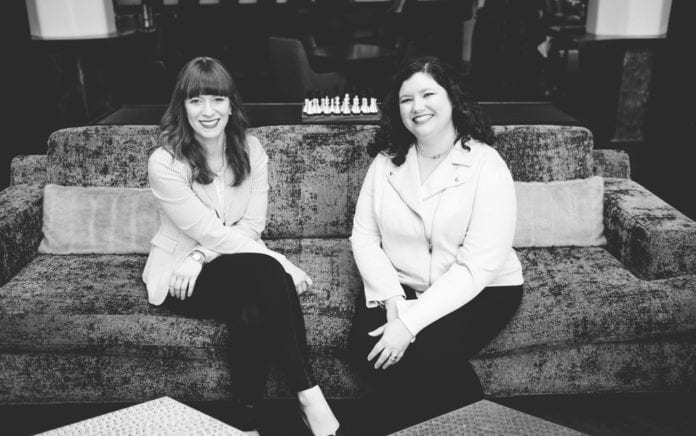 Sarah Stewart Holland and Beth Silvers, from opposite ends of the political spectrum, discuss gracious disagreement.

A few years ago two friends in Kentucky started a political podcast. It caught a wave. Now Pantsuit Politics has listeners in all 50 states and overseas, has landed on numerous best-of lists and has been downloaded 4 million times.

Twice a week, Sarah Stewart Holland and Beth Silvers discuss the down-and-dirty details of current events, as thousands of public policy wonks do every day. But here’s the thing: The women, two Christians who are on opposite sides of the political aisle, spend an hour conversing without a hint of the scorn, arrogance or even the cocky certainty found on other political podcasts, cable TV or talk radio.

Because of the grace.

Holland (“Sarah from the Left”) and Silvers (“Beth from the Right”) practice grace-filled conversations that are at the same time timely, frank and specific. Recent episodes, for example, tackled Michael Cohen’s testimony before a House committee and the United Methodist Church vote on LGBTQ congregants and clergy.

Holland, a former Hillary Clinton campaign staffer, and Silvers, a life and business coach (and “recovering lawyer”), have written a book that presents their case for grace-filled citizen participation in politics with this priority: putting relationships before policy wars and understanding before arguments.

In I Think You’re Wrong (But I’m Listening): A Guide to Grace-Filled Political Conversations (Thomas Nelson), these former sorority sisters start off by providing an assessment of our current cultural moment.

We all know the rule: Don’t talk politics in social gatherings. The divisiveness will make people uncomfortable or start arguments or ruin friendships. Or worse.

If we are the type to disregard the rule and confront “the other side,” we don’t listen, we lecture. We don’t probe, we pronounce. We don’t ask, we attack.

On the national scale, we spin in our echo chambers protected by a narrow funnel of “news” and social media that confirms what we already think. We sort people according to a false dichotomy (Democrat or Republican, left or right), leading to a winner-takes-all model in which everyone loses. It’s us against them, right vs. wrong, light vs. darkness. Politics descends into tribalism. Conflict becomes identity.

Holland and Silvers diagnose this binary thinking and culture warring as a serious case of “grace deficiency.”

The two women refer often to 1 Peter 4:10: “Each of you should use whatever gift you have received to serve others, as faithful stewards of God’s grace in its various forms.”

They believe this message is foundational in understanding our role as stewards of a sense of gracious responsibility for our neighbor. “Political conversations and actions aren’t exempt from this stewardship,” says Holland. “They are an opportunity to extend grace one to another based on the truth that we’re fellow human beings.”

In the book, Holland and Silvers write, “Grace helps us make difficult conversations less difficult by tapping into the larger shared mystery of human experience. … We don’t have to accept the unacceptable in order to maintain our grace. Grace simply means that all people are valuable. It does not mean that all opinions are valid.”

Scripture paints a portrait of Jesus extending this type of grace by listening, telling stories and asking questions, says Holland. Even more striking is that he approached people with respect and empathy regardless of ethnicity, sex, socioeconomic status or religion.

“We forget how radical it was to sit down with someone from a different ethnic group in Jesus’ time—and in most of human history,” observes Holland. “The words of Christ are invitational, not oppositional. An invitation to community. That radical acceptance is something we today need to think about in the ways in which we engage about politics.”

In 2016, Holland discovered something that surprised her as she knocked on 5,523 doors campaigning for a seat on the city commission of her hometown, Paducah, Kentucky.

People wanted to talk politics, but were afraid to.

“They, especially women, had shut themselves down,” says Holland, who won a two-year term. “They were bottled up. They had questions. They wanted my opinion on what they thought.”

She was stunned at the hunger for a safe space to talk about their concerns about current events and policy without getting shamed or slammed. “They were afraid they weren’t ‘expert’ enough to discuss issues, or that things would turn ugly.”

That added fuel to Holland’s already passionate activism. “No democracy can function the way it’s supposed to if people feel silenced,” she says.

But there’s no room for political activism in the church, right? The discussion applies only to individuals and groups outside the sanctuary, doesn’t it?

While Holland and Silvers don’t specifically address in their book the role of the church in politics, they know it is an important discussion to have..

“Most church leaders shy away from the topic because they don’t want the church to become or be expected to be an arbiter of what to vote for,” says Silvers.

The two women make it clear that that’s not what they’re promoting. They acknowledge that on one end of the spectrum are folks inside some churches who “are convinced that the spiritual stakes are so high, we should be telling people how to vote,” says Holland.

This approach can shut conversations down and lead to alienation or personal attacks, she says, noting that such an orientation also can “lead a community to lean into self-righteousness and anger in a way that really isn’t following the words of Christ or the example of Christ.”

Silvers and Holland believe churches should strive to have more conversations in which people have the freedom to ask questions rather than be preached at with answers.

“We tell families and friends all the time (like at Thanksgiving) that our goal is not to walk away from the table with draft legislation,” says Silvers. “Instead we want the church to engage in discussions—because discussions are excellent ways to work on yourself, to explore your own values and your spirituality and how you apply the teachings of Christ in the way you live your life in community with other people.”

In thinking about how pastors can provide guidance in their church when it comes to political discussions, Holland turns again to Christ. Church leaders need to “approach it the way Christ did, with parables and story. That’s the way people learn, that’s the way people engage.”

Leaders, she says, need to create a safe place and invite people in to examine their own narrative. Then they should ask, “When you hear something in the news, does it conform to what you know as your story, or do you have a different one?”

People who don’t have debating skills or aren’t up on all the current stats, data and talk-news headlines often feel shut down and choose to just keep quiet, she says. “But everyone does well when we take a step back and bring the discussion around to values. That’s how you get out of the logjam.”

From Outreach Magazine  Try This: Host a Movie Night During Memorial Day Weekend

For example, Silvers says, we should step away from the anger-fed arguments of what’s happening on our border and ask, “What does it mean to be American? And who should have the opportunity to be an American?”

She adds, “We very rarely take the big step back to talk about what we’re really trying to do here. And every voice is important to answering that question.”

An important theme on Pantsuit Politics is prioritizing relationships. “As a church starts to tiptoe into fostering political discussions, it needs to start in a place where relationships are already strong,” says Silvers. “You want people who know each other, who care about each other, who see each other as full human beings—not representatives of a particular party or position.”

The women recommend that a church start with existing small groups, where relationships already exist, where people gather in homes and break bread together. They suggest any beginning conversation on politics be a facilitated discussion, to build bridges between faith and policy.

“Don’t just decide you’re going to have a workshop this Saturday on reproductive policy and have a random collection of people show up. That won’t turn out well,” explains Silvers. “Church leaders set the tone. They should be constantly asking, ‘Are we engaging with love?’”

She says Christians need to talk about the way they talk. “Nothing in the Christian faith tells us to go looking for enemies. We need to view everything we do through the answer to the question, ‘Are we leading with love?’”

Other questions for churches—and all Christians—to consider: “Can people see Christ in our tweets? Are we clearly acting like the hands and feet of Jesus when we talk with others about politics?”

A small step anyone can take today is to examine yourself. Holland says, “It isn’t an action item, like take this class or read this book. It’s self-reflection.” A starting point would be to think of political conversations you’ve had (or didn’t have). What went well, what didn’t and what was your role in it?

On their podcast, in their book or during speaking engagements, Holland and Silvers don’t hide the fact that they are Christians. At the same time, they don’t take a position and say, “It’s based on Christian values and therefore we’re right.”

These two women say there are no quick fixes—in politics, in life. “It’s the long game,” says Silvers. “One conversation about Jesus doesn’t often directly lead to baptism, right? Spiritual development takes a lifetime. So does politics.”

“I don’t see Jesus demanding us to take stands and win arguments. He asked questions, nurtured, nudged,” she says.

Holland adds, “The model is Jesus, not talk shows.”

Read more of our coverage of politics and the church in the May/June 2019 issue of Outreach magazine and at OutreachMagazine.com/politics.