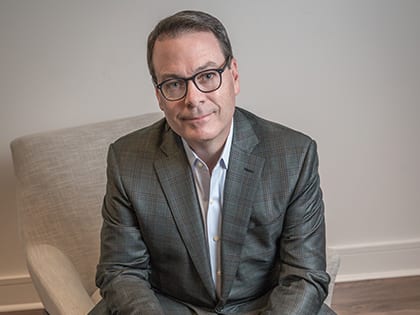 “Grace comes first, then truth. Connect before you correct.”

Don’t miss part 1 of the interview, in which Chris Hodges talks about how an act of vandalism involving 100 dozen eggs brought him to Christ, how the book of Daniel balances grace and truth and getting people to focus on the eternal.

In The Daniel Dilemma, you write of being witnesses and not judges. What do you mean by that?

There are several different roles in a courtroom. There’s the judge, the prosecutor, the defender, the witness. It’s not my job to judge anyone or defend everything. I just need to tell my side of the story. People really love to hear. They would love to believe there is a better way. “Neither do I condemn you,” Jesus tells the woman caught in adultery. “Now go live your life and do not sin.” Grace comes first, then truth. Connect before you correct.

You had a life-changing experience with your autistic son. Can you relate that story and why it has such an impact on you?

We were on vacation at a ski resort in Colorado. We were with two other families, so about 20 people. We’d gone into a Starbucks to get coffee. Joseph, my son, went into the bathroom at the very last minute we were getting ready to leave. When he came out, all of us were gone. He left in the opposite direction. I freaked out. Autistic children are set off by unusual situations; I knew he wouldn’t be able to communicate with anyone. We couldn’t find him and he couldn’t find us. It was like the worst 25 minutes of my life. I was sobbing and crying out when Joseph saw me 100 yards off and yelled, “Dad!” I looked and saw him crossing the stone bridge and ran to him.

I understood how passionately God the Father seeks the lost. In losing Joseph, I was the father who lost something of great value. The only thing I could think about was finding him. That’s the heart of how God feels about the lost.

What keeps us as a church from experiencing the same passion?

In the middle of the book of Daniel we encounter Nebuchadnezzar, the powerful king. Nebuchadnezzar ruled over the great city of Babylon, one of the seven wonders of the ancient world. He probably felt like he was the greatest king of the Babylonians, maybe even the greatest monarch of all time. Nebuchadnezzar shows us that pride springs from the misguided belief that someone other than God is in control. The pride of Nebuchadnezzar is not limited to the king. People in our own culture are trending in a pattern where extreme pride is the new normal. Through a trust in our technology and riches, we often operate under the fantasy that we are in control. In its witness, the church must embrace Paul’s words to die daily, to sacrifice. At our church we start each year with prayer: If my people, which are called by my name, will humble themselves, and pray. It’s not just the prayer; it’s the humility behind it.

How does pride express itself in our culture?

Our culture believes we know and understand people better than God does. We think we know how to love people better than God does. People often walk up to me and ask me for my opinion on a hot-button issue. I always respond the same way, What makes you think my opinion is important? It’s only what God says that matters. When we form opinions over issues God has already made clear, there is a great deal of pride.

How should the church handle polarizing cultural issues such as abortion and same-sex marriage?

People need to settle things in their own hearts. When I talk about core values, I’m not just talking about us and God, but us and culture. We muddy the water of evangelism when we push hot-button issues to the forefront. Based on God’s Word, I believe marriage is defined as one man and one woman and that life begins at conception, but I also believe such truth is best engaged in the context of trust.

In the book you write that religion messes up Christianity. What do you mean by that?

We come back to pride and control. Religion is not really a biblical concept. Religion is a set of external practices focused on control; Christianity is internal and focused on love. Jesus came to tear down religion.

Besides developing caring relationships, what should we be doing?

Praying. We need to be more hopeful that the lost will come to Christ. I believe prayer plays a critical role in preparing a person’s heart. At our church, we see scores of people far from God—I mean really far from God—come to Jesus. Learning how to pray for lost people is a difficult thing. The way God often works is to create a crisis moment in a person’s life, a wake up call. I often tell people, “Hey, if you get in a situation where you feel you need God, I would love to be the first person you call.” When a person gets in a crisis situation where the only solution is God, they’re going to step across that line. Often, it is not reason, debate or sharing philosophies that brings a person to Christ. It is that person being startled awake.

Can you tell me about the time you thought you had a heart attack?

I was jet-lagged, overcaffeinated, crazy-stressed, all kinds of things. I was in Australia speaking at a pastors’ conference. I had just done like five Sunday services, and I was headed to a retreat when I began to have heart attack symptoms. It was like a 300-pound man sitting on my chest. My heart rate was real high. I thought I was dying. I was telling the pastor in the car what to tell my wife. It turned out to be an anxiety attack. It was a very scary moment for me.

I imagine that was a bit of a wake-up call.

That was about five years ago now. I have changed how I travel, my coffee consumption, my diet and my time for rest. The busyness of my life was a trap I had fallen into. I reorganized my life to be faithful to honor the Sabbath. It was a very difficult process.

Did you see any parallels with that experience and the book of Daniel?

I personally believe Daniel is more than a story; it’s a prophetic playbook for us to take note of. Take the story of King Belshazzar reading the writing on the wall: Mene, mene, tekel, upharsin. Mene means you have a certain number of days. Tekel means weighed—your life is out of balance. Upharsin means divided—you are going to lose something very important. Through the experience of what I thought was a heart attack, I could see the unfocused, busy life I was leading. I also began to realize how busyness often distracted me from the bigger realities of life.

How is Church of the Highlands caring for your community?

We are very involved in the prison system, social justice as it relates to medical care and dental care. We’ve seen changes in crime and graduation rates in an inner-city school we have partnered with. We serve and connect every year with the mayors of eight cities and are involved in projects that are important to them. We draw tens of thousands of people into the projects. In a lot of ways we’re trying to impact the communities we live in and to earn people’s trust and their love to show them the love of Jesus so we can use words to lead them to him.