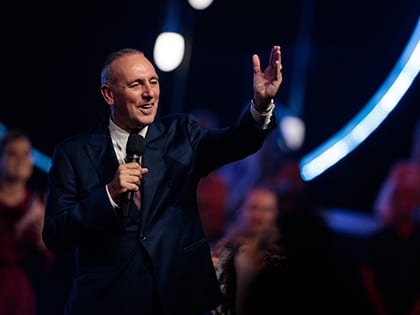 “Believers and church leaders shouldn’t just be living saved. They should be living called.”

Chances are, wherever you live on the globe, there’s a Hillsong Church campus somewhere near you. With 80 affiliated campuses worldwide and an attendance of more than 100,000, Hillsong is as much known for its worldwide church movement as it is its contemporary Christian worship hits. Its scope also includes a film and television platform and three record labels, not to mention conferences, curricula, an international college, apparel, and books. At the helm of this worldwide movement is Brian Houston, founder and global senior pastor of Hillsong Church. Houston not only leads pastorally, but he’s deeply involved as visionary leader across the spectrum of Hillsong’s reach.

Houston has recently released his second book, There Is More: When the World Says You Can’t, God Says You Can (WaterBrook). There Is More encourages readers to live their lives with expectancy for the calling and impact God has places on their lives. It’s a message both everyday Christians, and the leaders of those Christians, can identify with. Here, he talks briefly about his role in the Hillsong movement today and highlights how a few of the principles he discusses in the book have played out in his leadership and the life of Hillsong.

What’s going on right now in the Hillsong movement, and what does your role currently look like?

We started, like any church does, small with a very small group of people, and obviously it’s continued to expand over 34 years. It’s incredible. And it’s part of the miracle of our story. As far as I’m concerned, in terms of my leadership and my wife’s leadership, we’ve had to grow with it. I think our capacity and our ability to lead what now is effectively a global movement has developed at the pace of the church. When we started, we were obviously just here in Australia so we were very hands-on, and very focused on life and just one location, really. Now with multiple locations around the world, it’s impossible to be as hands-on. Other people do a great job, and our leadership team has grown. That’s enabled me to look further down the road.

From Outreach Magazine  6 Striking Trends Shaping the U.S. and World

Now my focus is very much on the global side of things, looking at the health of the church going forward. I’ve always thought the first part of a leader’s life is vision-building, gung-ho, pressing forward. The second part of your life is much more about equipping and empowering others and releasing other people—becoming more of a father or mother of the faith. I sort of see that this transition has happened in our lives over the last few years. We’re still very hands-on in one sense, but our vision is definitely broader. And we definitely have been able to lift our eyes higher and look further down the road because of so many incredible people around us. We’re not so locked in and focused locally, but we’re looking at the bigger picture.

In your book, you talk about “praying for the impossible and petitioning God for what others deem uncommon, unusual or unattainable.” That posture toward God seems to be more and more rare in the world today, especially as culture grows increasingly secular and skeptical. How have you been able to foster that sort of expectant faith at Hillsong in so many very secular cities around the world where campuses now exist?

I’ve always said that people are people, so I don’t think we’ve ever distinguished between a secular city and, say, a Bible Belt city. We just try to be true to ourselves wherever we are. And I tend to believe in the potential of people, so hopefully that comes through in the way I speak, the way I lead, and the way we build up other people. For whatever reason, I think our church resonates with young people in these bigger cities. I don’t know whether it’s because we’re grace-filled or exactly what it is, but where others have found it difficult or even impossible, our church just seems to resonate in places like that: bigger, more secular cities. And a lot of it is calling. I really believe we’re called to reach cities of influence.

Part of discovering God’s abundance for us is speaking our faith. You make that point in the book, but you also clarify that there’s a fine line between a faith confession and empty words of presumption. How can leaders help their people distinguish between the two and learn to boldly speak their faith without venturing into selfishness, discontentment or a prosperity gospel?

When I think about There Is More, I’m not thinking about stuff or acquisition, I’m thinking about calling and purpose and the will of God for people’s lives. In scripture, 2 Timothy 1:9 says, “[he] has saved us and called us with a holy calling, not according to our own good works, but according to his purpose and grace.” That one verse says he’s saved us, he’s called us, he’s purposed us, he’s graced us. So I have this real conviction that Christians and believers and church leaders shouldn’t just be living saved. They should be living called. If we’re living called, then we’re on an adventure called the will of God.

My passion and my heart is to see people really understanding that call, that God’s got purpose for their lives, and that if we could just see our potential the way God sees us, there is so much possibility. To me, there are people who are going to think this is about personal prosperity or selfishness or greed, but it’s really about conviction in the first place. If God were going to bless you, why would He want to bless you? There’s a sense that it’s for a reason, it’s for a purpose. It’s bigger than ourselves. So that has been the kind of spirit I’ve tried to put into our church and our congregation for many years.

In Part 2 of this interview, Brian Houston discusses how churches can remain receptive to God’s leading, why leaders need to be authentic on and off the platform and how Hillsong aspires to help the next generation do bigger and better things for God.