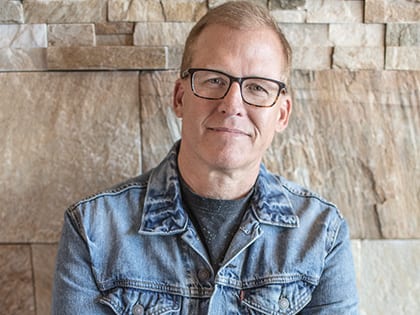 “I felt an overwhelming pull—if I’d entrust my life to God, he’d use me to help people get ready for their last day on this planet.”

In 1980, a fresh-faced college student trekked from central Illinois to Southern California for an internship at Eastside Christian Church. That intern, Gene Appel, would go on to begin a full-time pastoral ministry: as senior pastor of Central Christian Church in Las Vegas, Nevada, for 18 years; as lead pastor of Willow Creek’s South Barrington, Illinois, campus for five years; and, for the last nine years, he’s been right back where he started—Eastside Christian Church. During that time, Gene has become a veteran at helping churches navigate change and write new chapters.

Eastside’s multiple campuses in the Anaheim, California, area have seen remarkable growth since Gene’s return. Today, their vision is to reach 1 percent of the 5.8 million people who live within 20 miles of their hub campus. And with growth like they’ve seen in the past year, that vision seems like it could become a reality. In the past year, the community meeting on their three campuses has grown 38 percent, adding 1,979 attendees.

Outreach Editor-at-Large Paul J. Pastor caught up with Gene to hear his thoughts on leadership, growth and how to find the freedom of your “main thing.”

Tell us about your faith and ministry journey.

I’m the youngest of six kids and grew up in a pastor’s family. That can be a wonderful or a terrible thing for children. For me it was great. My dad was the same at home as in public and marked my life in very positive ways. I can’t remember ever not wanting to be in ministry. But that took on a totally new clarity when I was a teenager.

My family had a vacation home up in Minnesota. I had been out fishing with my dad one afternoon. When we came in that night, he wasn’t feeling well, so we took him to the little hospital nearby. He’d had a major heart attack. Four days later, his condition worsened to the point that they decided to transfer him to a larger hospital in Fargo, North Dakota. He died on the way there. I was 14.

A few hours after his death, our family was all back at our cabin, packing, preparing for the 700-mile journey back home to central Illinois. My mom sent me into town with a wad of cash to pay our summer tab at the local store. I was walking down a gravel road with pine trees on each side. I have only had a few circumstances in my life where I felt God truly speak to me. But I felt him on that walk 43 years ago. I remember every aspect of that half-mile in vivid detail—even down to the plaid bell-bottoms and maroon T-shirt I was wearing! [Laughs]

I sensed God clearly: Gene, what happened to your dad today is going to happen to every single person on the face of the Earth. Only one thing matters. Do they have a relationship with me through my Son? I felt an overwhelming pull—that if I would entrust my life to God, put my hand in his, he would use my life to help people get ready for their last day on this planet.

The clarity of that call has never left me. It’s 43 years ago now, but it feels like it was yesterday. And ever since, I have known what my life is supposed to be about. Two weeks later, I preached my first sermon. It was five minutes long and titled “Sharing Christ With Others.” That’s still what I hope my life’s about.

A powerful calling. How did you end up as an intern at Eastside?

Well, I started preaching regularly while still in high school and after I graduated went on to a little Christian university for ministry training. Part of that experience required an internship. So when I was 20, I went to California, where an opportunity at Eastside had come up.

The church averaged a weekend attendance of about 1,500 then—remarkable for 1980. I had never experienced anything like it. The pastor, Ben Merold, became a great mentor to me. I lived with him and his wife, Pat, during my internship, and Ben marked my life. My dad taught me to love ministry; Ben Merold taught me how to minister. He deeply valued the Bible and being practical and relevant. He also modeled leading with clear vision. When he had joined the church, it had about 100 people. By the time he stepped down in 1991, it had grown to about 2,900. A lot of the relationships I made that summer I continue to have today. One kid who was in the high school youth group just finished a term as chairman of our elder board. It’s so fun. I’ve known people here for 37 years.

What else shaped your perspective on ministry?

Well, all through high school and college I worked on a farm. My boss taught me so much about work ethic: how to get up, how to approach a day, how to be a jack-of-all-trades without losing your focus. I worked that farm for eight years. I attribute much of what I know about work to that experience.

But what else shaped my ideas about ministry? Well, ministry did. I grew up in the Midwest, in a predominately white, conservative small town pastor’s home. Then, when I was 25, I became the senior pastor of Central Christian Church in Las Vegas, Nevada. I could barely shave! And now I had a responsibility to spiritually care for a place that was culturally foreign to me. While I had seen God work in my growing-up years, those 18 years in Vegas were so good for me. I saw the power of the gospel to truly transform lives. Not just folks who had grown up in Christian homes—as lost as anyone, of course—but whole lives changed. God grew my heart for people who were far from him.

Those 18 years in Vegas caused me to develop a fresh perspective. I had to rethink my initial approach to ministry. It became so clear to me that God’s love, and grace, and Son, and house are for everyone. I was called to be a bridge-builder to people who were far from him, not a wall-builder.

In my first three to four years in Vegas, I transformed, and the church transformed with me. By my fifth year, we were much more focused on reaching people far from God. Since that point, that has been the major focus of my ministry—moving people distant from God into discipleship.

From Outreach Magazine  Dave Gibbons: Getting to the Fringe

The original call to 14-year-old Gene was taking shape, wasn’t it?

Yes. The “main thing” of my ministry was emerging.

My five years at Willow Creek, from 2003 to 2008, held another key ministry experience—God grew my heart for global need and ministry. It’s easy to feel embarrassed about it now, but even after 18 years in Vegas, preaching to thousands, raising significant money, reaching thousands far from God, planting churches, I honestly didn’t have a heart for the globe. I just wasn’t moved until I starting getting on airplanes during my years at Willow—going to some of the neediest corners of the globe. Seeing the need firsthand wrecked me. It continues to wreck me.

Tell us about your return to Eastside.

I was at Willow for five years, and it became clear to me that God had called me to be the main pastor of a local church. So I made the decision to leave without knowing exactly what would be next—just knowing that I needed to move toward that calling. I was considering various opportunities, including a very interested church in Missouri. After several months of conversation with the leaders, I was feeling like God must be asking us to go there. They made an offer, I agreed to it, and my family even started shopping for houses.

But during that trip, I told the leaders hiring me, “Hey, before I sign on the dotted line and make this official, I want to take one more week to pray about it. I feel like this is going to be the last major ministry move in my lifetime, and I need to know that this is what God’s asking me to do.” A week went by. And I wasn’t at peace with the decision. I couldn’t articulate why. I called them and said, “I know this isn’t what you’re expecting to hear, but I just can’t say yes.” I hung up from that call thinking that was probably the dumbest thing I’ve ever done.

Exactly an hour later, I got a text message from a friend of mine:

When I found out it was Eastside, my heart skipped a beat. The chance to come back and help the church that had poured so much into me move into a new chapter—it was right. I knew immediately why I had said “no” an hour earlier. And I started at Eastside on the first weekend of October 2008.

One Word of Advice From Gene Appel

Pondering a new direction or vision for your church? Take the time to bring your key leaders and influencers together on the vision before you go public. In my early years in ministry, I was so eager to share vision that I’d find myself working to get people to support my vision after it had been announced. But it’s the behind-the-scenes work that ensures that when you go public with a new vision, you’ll have your team’s full support.

When you’re younger, you’re impatient. But I’ve learned the wisdom of working collaboratively to get people on the same page. What feels like a slower process on the front end will go further and faster in the future because you took the time to bring people together.

In part 2 of the interview with Gene Appel, in which he talks about how he rallied his staff and his congregation around a new vision for Eastside Church.

Paul J. Pastor is editor-at-large for Outreach magazine, and author of The Listening Day: Meditations on the Way (Zeal Books). He lives in Oregon. For more: PaulJPastor.com