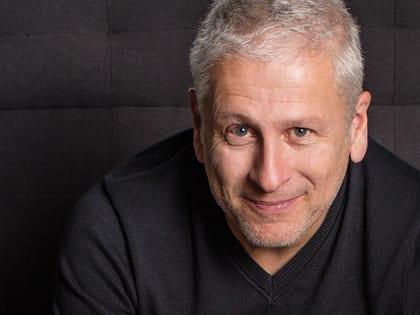 “In time present necessity becomes future vacancy. We have to invest in people who can’t invest in us.”

In Part 1, Louie Giglio relates his own spiritual journey, including his struggle with anxiety and depression and the path that helped him rise above it. Here, he discusses effective ministry to a rising generation of 20-something Christians.

The Passion Conference has mobilized millions of young people to seek God and fight sex trafficking. Why has it resonated with this generation?

Passion was God’s idea. I hope he’s OK with me saying that. I know it wasn’t my idea. God planted in my heart and the heart of the team that launched this vision. I had spent 10 years at Baylor University doing ministry with students every single day, so when God nudged us to look up from one campus to the campuses of America, and to challenge them to put their eyes on Jesus and to live for his fame, we obeyed.

I believe there are two reasons why it has resonated. One, God is most interested in his glory. That’s not just some spiritual hyperbole or conference phraseology. It’s a factual statement about what God wants, and since Passion is all about God’s glory, it has some wind in its sails. Second, I think young people, deep down, want to know that their boat is set toward true north. They want to know that at the end of their journey, they’ll know that their life mattered for what matters most. And when they understand that somehow their life can be caught up in the eternal flame of the glory of God—and they can do that in business or architecture or sports or as a mom—they go “Wow!” That resonates with young people.

There’s so much desire to engage in all these amazing social causes, such as fighting sex trafficking and helping the poor. But evangelism seems like a harder sell for this generation. How do you combine the two?

Both things collide in the person of Jesus. Jesus is evangelism embodied. He’s God in human flesh. That’s evangelism at its core. It’s heaven sending mercy and hope to earth. So Jesus was all about evangelism. That was his final mission: to give his life as a sacrifice for the sins of the world. That was his driving purpose. So you can’t say, “Well Jesus was just a philosopher or a teacher or a healer.” No, Jesus was an evangelist. One translation says he “set his face toward Jerusalem,” where he would die. He was always locked on the mission of the cross. But on the way to the cross he healed the blind, he touched the lepers, he embraced prostitutes, he gave dignity to women and other marginalized people, he spoke out against injustice. He did some of those things to show he was the Messiah. But he did all of those things because God has a heart of compassion for people. The more we talk about Jesus, the more we see both of those things co-existing happily.

From Outreach Magazine  How to Survive the Busyness of Christmas

If you have a Jesus who is only a humanitarian, you’re not reading the last chapters of Matthew, Mark, Luke and John. If you have a Jesus who is only an evangelist, you’re not reading the whole of Matthew, Mark, Luke and John. But if you take it all seriously, you get it all. We care about justice and the poor because it would be a tragedy if we gave the next generation the impression that worship is just about singing more songs. Worship is about doing justice and reaching out to the lost and least of these in Jesus’ name. Worship and justice are two sides of the same coin. If all we do is just keep gathering believers, what does that say to the world about our satisfaction in Jesus? If the satisfaction we’ve found in Jesus is great enough, it will trickle down from our lives to others.

If we don’t see tens of thousands of college-aged kids come to know Jesus this year as a result of our Passion gatherings, I question the validity of everything we do. No one goes to an amazing restaurant without telling people, repeatedly, about what they tasted and experienced and then trying to get their friends to go there too. So what does it say about our satisfaction in Jesus if we aren’t drawing our friends and our family into everything we’re experiencing in him?

Reaching the next generation is a perennial problem for churches. What would you say to that pastor who worries that his church is just not reaching that 20-something demographic?

It begins with a desire to reach them. So it’s a good sign if the question is being asked. The future of your church is in your kids ministry, in your middle school, and in the high school or college campus down the street. People say, “Well, I don’t live in a college town.” Yes you do! Unless you live in a tiny little town in the middle of nowhere, it’s most likely there’s a community college nearby or a technical college or an art school. There are university students everywhere! If I’m a pastor, I’m asking the question, “Where is the future? And who is the future? And are they on our radar?”

Often the only people on our radar are people who are giving every Sunday. So it’s present necessity that drives most pastoral vision. But in time present necessity becomes future vacancy. We have to invest in people who can’t invest in us. People say that college students won’t give, they’re not dependable and they’re flighty. Well, give them a chance. Invest in them. Commit to them. I think you’ll find a different story. They will give. They are resourceful. We’ve seen them give $14 million to global causes. Make it a priority to begin looking for the future generations in your context. Then rally your leadership around a vision by embracing and validating the young people in your context. Speak to them, be seen with them, identify them, aim resources toward them. And encourage older congregants to begin transferring resources and responsibilities to the next generation.

We need to get on our knees and ask God to help us bridge the gap. I’m 57 and I think I have a pretty good rapport with the 20-year-olds at Passion City Church. It’s not about age. It’s about speaking spirit to spirit. It’s about communicating heart to heart. If they see us as authentic and genuinely concerned for them, they’ll respond.

The last thing: Don’t cut them any slack. Don’t say, “Well, they’re millennials, so what can you do?” No, look at them and say, “You have amazing potential, you’ve got to stand up in the redemptive power of Jesus and start walking out what God has already entrusted to you.” Call them up to a high standard. Call them to hard work. Call them to a big vision. And don’t be afraid of that. That won’t cause them to leave. It will cause them to stay.

A few years ago, you were invited to pray at President Obama’s inauguration. But then there was a controversy over your involvement and you were pressured to withdraw. Did you learn any leadership lessons through that experience?

I learned to stay focused on my vision. What I went through was very public, but all leaders go through ups and downs every day. And it’s important that through it all, you find ways to stay true to your convictions and never take your eyes off Jesus. We have to understand what God has called us to do every day and stay committed to that calling.

I want to serve my nation. I want to pray for our leaders. I want to carry light into the public square. But my primary calling is to preach the gospel of Jesus. So I don’t want anything to distract from my calling to do that. That’s my main message. We’re all going to have some wins and we’re all going to have some losses. The main thing for a leader is to make sure at the end of the day we don’t get too distracted by either the wins or the losses.

Check out Giglio’s interview on the Church Leaders podcast.