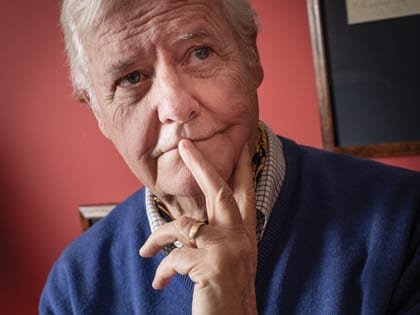 “Jesus never spoke to two people in the same way. So let’s drop all the simplistic, cookie-cutter methods of evangelism.”

In Part 1, Os Guinness recounts something of his own faith journal and his concern for the lack of passion for the art of Christian persuasion. Here he points to how we can have a great impact on the culture around us.

Folks might assume that you—an Oxford-educated author and frequent speaker at universities, forums, think tanks and so on—are implying we all need to be as educated and eloquent as you are to make a defense of the faith.

Let me clear up that confusion beyond any doubt. A lot of people dislike what I am saying because they think it requires too much education. Does it? Not at all. In fact, the opposite is true.

Most of us, and I include myself, are not good at persuasion because we have had too much education of the wrong sort. Our best universities are great at teaching us to think, reason, argue, analyze, critique and so on, but they’re not good at teaching us imagination, creativity, irony, humor and the like. In other words, many of us have been educated out of the gift of persuasion.

So anyone can develop the skill of persuading people to consider the truth of Christ, and it doesn’t require a degree in communication or a course in rhetoric or even a six-week church class with handouts?

Ours is the great age of technique, but American Christians have relied on recipes and formulae for too long. Jesus never spoke to two people in the same way, and neither should we. He approached each person as an individual, and so should we. So let’s drop all the simplistic, cookie-cutter methods of evangelism.

This means we must approach each person differently, and in our current post-Christian society many more will now be closed rather than open to the gospel. All of which means we need to learn how to love people enough listen to them, listening to learn where they are, and only then figuring out how to be persuasive to them.

Some very simple truths are at the heart of persuasion. First, knowing who the Lord is—we can be sure of the gospel. If faith in Christ is true, then no question, no challenge, no objection will ever shake it. Nothing will. We have to start with that assurance.

Secondly, we must love people we are talking to. We are not out to win arguments, but to win people. That means loving them enough to listen to them and get to know them. You can say something like, “Tell me your story,” and so find out who they are, what makes them tick, and where the treasure of their heart really is. That takes a lot of love and a lot of listening.

Third, discover whether they are open to God and gospel or they are closed. If they are open, you can share the gospel openly. But if they’re closed, you have to switch tactics and approach them in more subversive ways, such as the use of questions, stories and drama. I have a whole chapter on such approaches (“Spring-Loaded Dynamics”).

When people are open to the gospel, they don’t need to be persuaded. Remember the jailer in Philippi? He asked Paul, “What must I do to be saved?” and Paul answered him simply and briefly. He could do so because the man was that open. But that is unusual today.

Fewer people these days are open, and we need to know how to talk to people—such as the new atheists—who are not the slightest bit interested or needy. In fact, they are more probably indifferent or even hostile.

Loving and listening, rather than laying out the Four Spiritual Laws at every opportunity, might be interpreted as undermining the Holy Spirit’s power to work in any situation and supernaturally bring people to belief whether or not we know they’re “open” or “closed.”

That is a valid criticism of certain apologetics, but it shouldn’t be that way. Apologetics without the Holy Spirit is barren. The Spirit of God is the great apologist, and we are simply very junior counsels for the defense.

Our approach is thoroughly evangelical because it’s based on the New Testament. Our Lord told us to be in the world but not of the world. Well, that takes three things: engagement, discernment and courage. And of course, I would add, persuasion.

For me, the patron saint of apologists is Balaam’s ass. When the prophet would not listen to the Lord, the Lord spoke through the mouth of a humble but serviceable donkey, and I find that encouraging. It is not all up to us and our arguments. God is his own best apologist, and he can work through anyone and anything, however humble and inadequate.

The growing hostility toward Christianity in America can make it feel scary to take the risk of reaching out to share the gospel.

Even before the recent wave of terrorism, fear was the dominant global emotion. But in this country many Christians have an added sense of insecurity because we have lost our former dominance in the American consensus and we’re more and more discriminated against. So they feel unsure of themselves and the faith.

The world Christians knew and helped to create has gone forever, and many people are uncertain how to respond to the post-Christian world in which we now find ourselves. Should we pursue an activist direction, redoubling our efforts politically and seek to “take back the culture”? Or should we pursue a quietist direction, retreating to the country and building new monastic communities to preserve the faith?

Many Christians are swinging between such extremes, neither of which in my view is faithful and effective. Better far to live and speak as we should always have been living and speaking, and so engaging the world around us as salt and light. Only God knows whether our post-Christian situation will deepen, or whether we will see revival in our time. But either way we must be faithful.

It sounds as if you’re hopeful, even as we don’t know God’s purpose or timing.

The fact is that Christians are still the dominant majority in America, so shame on us if our influence in the culture is so pitiful. Look at the Jews, whom I appreciate deeply or look at the extreme feminists, gays and lesbians, whom I don’t appreciate. They are each a tiny percentage of Americans, yet they have much more influence than we do. Shame on us. The salt has lost its saltiness.

To put the point differently, much of the American church is in the same poor condition as the church before the Reformation or before the Great Awakening in the early 18th century. So we need reformation and we need revival. Our greatest contribution to that is to recognize the difference between what we can do and what God alone can do, so we pray.

But as we wait and pray and work, one of the foundational things we need is the ability to persuade. Under God, it is our immense privilege and challenge to work to open hearts and minds to what we know is the best news ever.