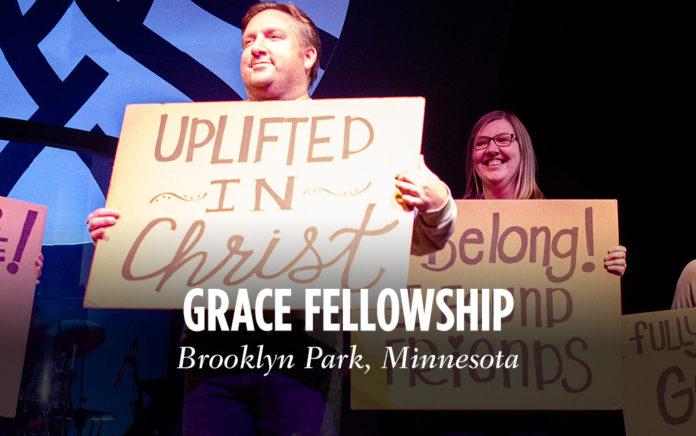 Minnesota church grows by getting creative about outreach.

“One of the first things we did was to pray about what God was calling us to do,” he says. “That gave us a focus that really drives a lot of our vision.”

The church has become connected to its community and laser-focused on its mission. Zach Hughes, a member of the church for 12 years, says that’s made the church irresistible to members both new and old.

“Week in, week out, people are giving their lives to Jesus, and we’re reaching out to the community and blessing them,” he says. “That tends to make the church pretty sticky, because people get excited about being where God’s moving.”

Boyd credits three qualities of Grace Fellowship’s ministry for the growth that’s taken place. First, he says, they’ve committed to evangelism. It’s not surprising considering he turned his pastoral candidate weekend sermon into a push for every person in the church to invite a non-Christian to attend. Forty people came to Christ that day. His first Sunday as pastor, they baptized 28 people. The following Sunday, another 20. In the past year, he says, not a Sunday has gone by that someone hasn’t come to faith, including when other lay speakers have preached.

“We really believe God has called us to the Great Commission,” he says, “and that a portion of our responsibility is to make the invitation and share our faith from stage and during the week.”

The second quality, Boyd says, is discipleship. A few years ago, about 23% of adults in the church engaged in small groups. Then they did a 10-week experience they called Rooted, which incorporated prayer, small groups and serving in the community. It was one of the church’s biggest discipleship moments, he says, and it ultimately led to more than 70% of adults and teens engaging in small groups.

From Outreach Magazine  5 Foundational Principles for a Strong Volunteer Culture

Finally, the church turned outward and began loving its city.

“We sit at a very busy intersection, but we weren’t really known in our community before,” he says. “When we prayed about that, people in the church kept saying, ‘Hey, I had this idea, what do you think?’ We treated community outreach like an experiment.”

Experiments like the Dollar Club, where they set out buckets and ask people to donate a dollar to bless people in their community. Or last summer, when they sought to reach locals who stayed in town because they didn’t have access to a cabin or lake up north, as many Minnesotans do.

“We dressed up our interns in superhero costumes and went around and told people they’re the heroes in our community and that we appreciate them,” Boyd says. “We had a hero-themed sermon series. We started participating in parades. We cleaned windows for small businesses and picked up trash. We partnered with the city for the fishing derby. We just started finding ways we could serve.”

The goal was to do 100 touches that summer. They doubled it. And perhaps the wildest part of that outreach experiment was this: While many churches were enduring the summer slump, Grace Fellowship actually grew by 26%.

God was clear about where he wanted them. They continued to find new and creative ways to reach outside their walls. They hosted block parties. In October they set up 10 Halloween Hot Spots around their community with bounce houses and food. Attendance grew by 50%. When COVID-19 hit, they gave $25,000 to relief efforts, mostly to feed frontline and essential workers.

After George Floyd’s death, church members flooded the streets to feed and help residents and business owners clean up after the riots. The church even continued its 11-year-old daily ministry to feed the homeless there. One church member and leader of that ministry was friends with Floyd, who worked as a security guard at the building where the ministry distributed food. That connection opened doors for the church to begin honest and open discussions on race relations.

Although the church is primarily white, its community is not. A quarter of Brooklyn Park residents were not born in the U.S., Boyd says, making it one of the most diverse parts in the Twin Cities metro area.

“This church doesn’t look exactly like the community we’re in, but in the past 18 months, it’s looking more like that community,” he says.

One church elder is the only tenured Black man at the college where he works, and he led the initiative of Hennepin County community colleges to initiate conversations around the issue.

“We are leaning into that and into his leadership,” Boyd says. “We really believe it’s critical that we listen to people.”

“Every time we lean in and trust God,” Boyd says, “he does immeasurably more than we could imagine or hope.”