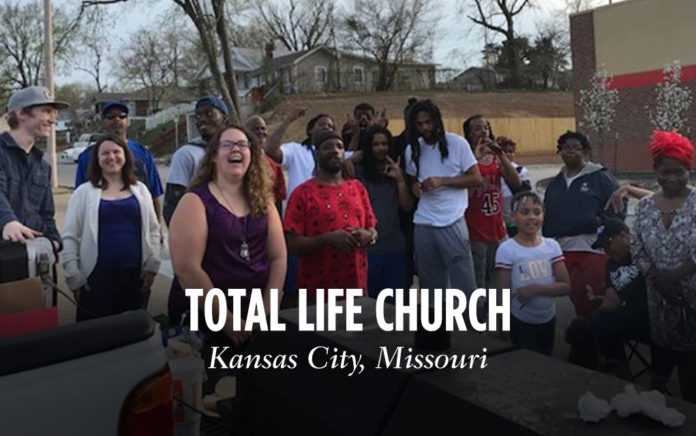 Three years ago, as Mark Bane was driving to Kansas City, he had a conversation with Christ that changed the trajectory of his life. A district superintendent for the Joplin, Missouri, Church of the Nazarene, he felt called to serve in the role on a regional level. He sensed the Lord saying that he (a white man) was going to start an inner-city church. The color of his skin didn’t deter him but the logistics did.

“I told God that I’d be traveling 27 days a month in this job. How could I possibly plant a church when I was only going to be home three days a month?” recalls Bane. “God responded, That’s why I’m asking. I’m tired of you doing things that are possible. I want you to do something that’s impossible.”

In August 2018, Bane launched Total Life Church (TLC) with a staff of nine and 200 members. But when he learned that there were 203 cities in North America with a population of 250,000 or more, that’s when the wheels really started spinning.

“If a city has a population of 250,000, they probably have an urban core,” says Bane, who notes that most of the church plants in North America are located in the suburbs, leaving a doughnut hole in the middle of the cities that house the marginalized and disenfranchised.

“That day I changed my vision from my church in Kansas City to 203 churches in North America,” says Bane, now director of evangelism and new church development.

In the last year, they have planted churches in Milwaukee, Wisconsin, and San Bernardino, California. Next up are Indianapolis, Indiana; Minneapolis-St. Paul, Minnesota; and Columbus, Ohio. They have about 20 district superintendents who have reached out. And in the weeks following the tragic death of George Floyd, TLC received more calls from district superintendents across the country asking them to please plant a church in their urban core.

From Outreach Magazine  Don't Let This Crisis Go to Waste

“For the first time in years, Nazarene districts are realizing that they don’t have any black churches,” says Bane. “We’re now in the process of figuring out how to accelerate our vision because one church a year will not be enough to accommodate this need. I think we will see exponential multiplication happen in the next year.”

TLC’s long-term plan is for the Kansas City church to become a training ground for leadership and mentorship.

“After the first full year of launch, I’d like to see every church plant a daughter church every year,” says Bane.

The financial structure they follow is that 15% of every dollar raised goes to take care of world missions while another 10% is saved for daughter church plants, which leaves the rest for local disciple making and for buildings, property, salaries, etc. Bane notes that it’s difficult to find leaders for these church plants because Christians tend to be homogeneous in their fellowships. Plus, pastors aren’t always eager to work for next to nothing in dangerous areas that are hot spots for crime. Bane, who does a lot of in-person evangelism at local laundromats and going door-to-door, regularly experiences feeling awkward and out of place, especially since he’s usually met with skepticism.

“When I knock on a door, they think I’m a cop, a representative of child protective services, a pervert, or a Jehovah’s Witness or Mormon,” says Bane. “I remember asking God why he wanted me to reach out to people who are nothing like me, and he said, You’re about as different from the people I’ve called you to reach as I was from you when I met you. There’s a mentality in church today that if it’s hard, God couldn’t be in it, but he’s moving us past that.”

In addition to personal evangelism, TLC also engages in mass evangelism, typically putting on four major outdoor events a year at which they give away Thanksgiving turkeys, backpacks full of food and supplies, and cars to single moms.

“I’m grateful that the Church of the Nazarene has been incredibly supportive,” says Bane. “Their desire to minister to the urban core has been an amazing gift to me.”