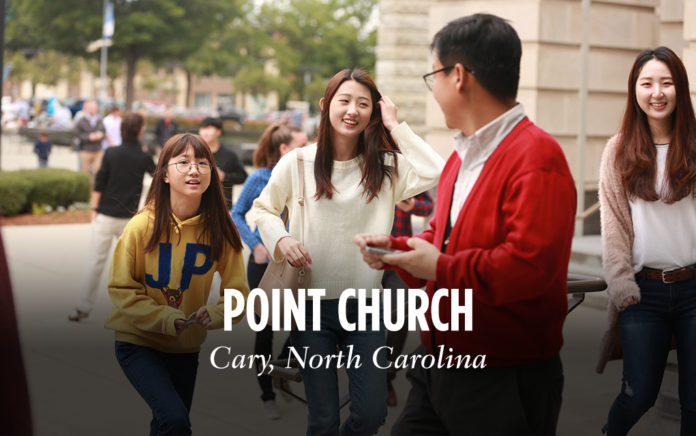 Church planting is key to long-term gospel growth throughout the world.

When it comes to church planting, the question Point Church asks isn’t, “Does this town need a new church?” The question is, “How can we help start a new church here?”

“Church planting is the most effective and biblical method of evangelism, and we have a belief that every town in America needs a new church,” says Point Church Lead Pastor Chris Hankins. “As a result, we’re much more proactive at planting churches in communities versus reactive.”

Based in Cary, North Carolina, Point Church has a vision to reach every person in the Raleigh-Durham and Chapel Hill, North Carolina, metro areas (also known as the Research Triangle) for Christ, and to reach beyond that into the rest of their state and the world. The church has about 1,500 people spread across 13 campuses in the Triangle area.

Point Church’s multiplication model is a hybrid between autonomous church plants and identical campuses. Each campus has a campus pastor who does live teaching and preaching, plus its own elders and deacons.

“We all play out of the same playbook, but each church is kind of running the plays, if you will,” Hankins says.

Organizing the church this way was necessary when trying to reach every single person in a region made up of people from dozens of countries and where more than 200 languages are spoken.

“Because we focus on every man, woman and child, we’re not just focused on white middle-class people,” Hankins says. “We have four Spanish churches. We have a church at Central Prison where we’re doing regular services on death row. We have an international church made up of more than 10 different languages. We have an East African church mainly made up of Rwandan refugees. We have the only Urdu-speaking church in North Carolina primarily made up of Pakistani refugees. There’s no way we can reach every man, woman and child only doing it in English.”

To connect with people beyond the Triangle, Point Church helped found a church planting organization called Carolina Movement, whose mission is to help every single North Carolina church, especially small ones, to become a church-planting church that spreads the gospel across the state. They’ve done it by pooling the resources of multiple smaller churches that, together, can plant across their state.

Both at Point Church and through the Carolina Movement, they’ve begun to see progress. They’ve been able to form coalitions around seven or eight smaller churches, each under 200 people. Instead of being independently sending churches, they collectively become a sending coalition of churches.

All of the churches Point Church has helped to plant across North Carolina have been in partnership with other churches through Carolina Movement. Even Point Church itself, comprised of 13 distinct, semi-autonomous campuses, is really a coalition of smaller churches.

But Point Church hasn’t stopped there. It also partners in a support role with other organizations to help plant churches in the Dominican Republic, India and Afghanistan. Exclusive of their own campuses, they’ve helped to plant 15 churches in their state and around the world.

From Outreach Magazine  Designing the Church as Today's Town Square

Says Hankins, “As we seek to carry out the worldwide mission of Jesus, and as we look through the Scriptures, church planting, in my opinion, is the most effective method of long-term gospel growth throughout the world.”