Home Ideas Church Profiles Something Bigger Than "Us": The Crossing 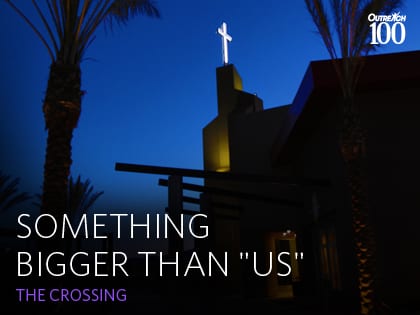 The Crossing Focuses on Serving Kids, the Community, and the World

Shortly after retiring as a professional baseball player for the San Francisco Giants, Brian Dallimore moved back to his hometown of Las Vegas, Nev., and began looking around for a church to attend with his family.

After visiting several churches, Dallimore and his wife Kim were frustrated because they couldn’t find a church that could handle their three children.

“All those places we went, we had a hard time dropping them off at Sunday school— especially our two little ones,” says Dallimore, 40. “They would cry and cry and cry. I looked online, found The Crossing, and the first day we decided to go we dropped off our kids and immediately there was no problem.”

“As trivial as that sounds, when you’re a parent, that’s just one of the first things that says, ‘This place is already starting to shape up like it’s for us,’” says Dallimore. “Our kids go in perfectly and it’s such a welcoming place. We’d never been there before, but we felt like we’d known these people for a while.”

Since attending the church, Dallimore, who grew up as a Catholic, has rededicated his life to the Lord and he, his wife and their children are active in the church.

“We just kept getting involved and meeting people,” Dallimore says. “Now, it’s truly a family for us. We are very comfortable being there and really enjoy showing up on Sunday.”

The Dallimores aren’t the only ones. Since the church was founded in 2000 with the partnership and support of Canyon Ridge Christian Church and Central Christian Church, average weekly attendance has exploded from 1,000 to 3,000 today. Initially the church met at a junior high, averaging 600 attendees in the first year. Since then, the church has grown 15 percent each year on average. In 2005, inaugural services were held at its current 20-acre campus.

From Outreach Magazine  Who Are You Imitating?

Senior Pastor Shane Philip attributes the “explosive growth” to several factors, including a commitment to the church’s “very strong engrained values” and its various programs that serve the community and world.

In 2010, the church took the step to make a conscious effort to minister to the community by starting its annual serve day where more than 1,500 volunteers set aside a day to serve and beautify different areas of the Vegas Valley.

“We’ve served by rebuilding a homeless youth shelter near the Las Vegas Strip,” Philip says. “This last fall we rebuilt a women’s and children’s shelter. We had 600 to 700 volunteers who helped rehabilitate that whole facility. We went to another apartment complex that assists those coming out of addictions and we helped to rebuild that. It’s called Freedom House.”

Further, the church is working to start or build 10 churches throughout the world, in places like India, Ghana and Ecuador. Hundreds of people attend these churches.