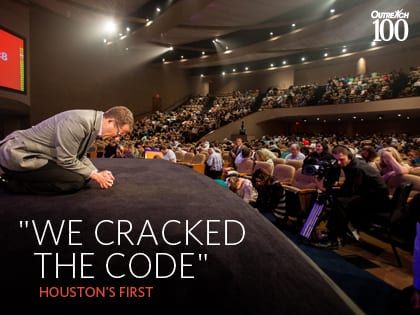 So says Gathering Pastor Stephen Smith, who cited a shift in priorities at the 173-year-old church as an explanation for its growing popularity. Church leaders returned to the basics, so to speak, with an emphasis on prayer, the Great Commission, and ministering to others, he says.

Church leaders frequently allot time for specific and purposeful prayer among its congregation—“dedicated moments”—asking God for revival within their hearts and within the city, Smith says, adding that “the church has been on its knees more in the last two or three years than ever before.”

There’s also been a strong push for missional work. On a local level, church volunteers help all over the city, at places ranging from a food pantry to the crisis pregnancy center. Outside of Houston, it frequently sends people to reach hearts for Christ in cities like New York and Boston, as well as in Asia, Europe and Latin America.

“The more we point outward to the nations, the more excited our people get about the inward things,” Smith says.

To fund outreach, Houston’s First Baptist undertook a “generosity” campaign in the midst of the country’s economic recession. In his messages, Pastor Gregg Matte emphasized giving as a key point in discipleship. Today the church donates 45 percent of what it receives to off-site causes, up from 22 percent a few years ago, Smith says.

“We cracked the code,” Smith says, “and it’s not really sleek or newsworthy; it’s simple. The idea of prayer, and the missions component, and the Great Commission component, has really pointed us away from ourselves and has helped the body grow.”